Article By Cristian Burbano on 7th May 2013 | @xtianburbano The collection draws influence from the film’s costumes and the brand has worked alongside the film’s costume designer and long-time Luhrmann collaborator, Catherine Martin, in producing the collection. The range includes formal wear and day wear, including tuxedos, tailored suits, waistcoats, trousers, shirts, ties, shoes and other accessories.

The collection is sleek and elegant, recalling the 1920s and that bygone golden era of men’s tailoring and classic style. Catherine Martin is a recipient of two academy awards for her previous work on Luhrmann films, and her skill and craft are very much evident throughout the line. The partnership itself is a natural progression as Martin used Brooks Brothers’ 1920s archives as reference when designing costumes for the film. In fact, Fitzgerald references the brand itself in many writings, so the collaboration is something the author himself would of indulged in – giving the whole collection a sense of authenticity.

The stand out piece from the entire collection has to be the pink suit. Don’t be put off by the colour, this suit is impeccably tailored and will have you standing out from the crowd for all right reasons this year. The pastel pink hue is actually extremely subtle and the suit is constructed from 100% linen, making it on trend and perfect for SS13.

Another highlight comes in the form of the shawl cardigan, which is available in bottle green and features red and white piping. This piece would look great with jeans and the two-tone loafers in the collection or used as an alternative to a blazer during spring.

The collection is truly stunning, with a range of pieces that reference the 1920s era but are brought bang up to date via contemporary detailing and cuts.

Shop the collection in store and online at brooksbrothers.com now. 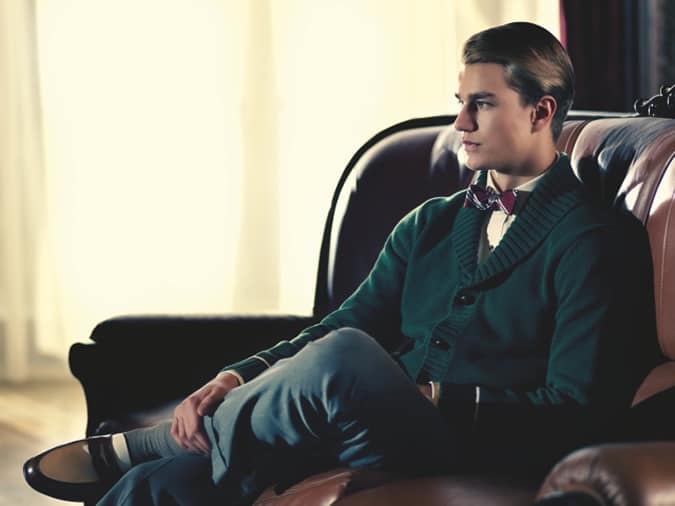