Music and fashion have been inextricably linked for eons. Even beyond pop stars releasing their own signature scents and alternative rock stars turning heel and modelling for high-end fashion houses (not naming any Jared Letos), how many of us spent our teenage years trying to recreate the wardrobes of our favourite artists?

For many of you, perhaps your biggest fashion inspirations are still coming from the world of music. Both industries are based on largely visceral art forms, creating shapes and moods to capture and enhance contemporary Zeitgeist. The concept of musicians signing on the dotted lines with fashion companies seems, in modern life, to be as natural a part of the music industry as the production of music itself – and in many cases the resulting product manages to combine two ancient pre-existing mediums to create something entirely new and exciting.

One musical group who are already no strangers to cultivating an image via outrageous outfits are Daft Punk, the iconic French House duo whose conceit is that the two are musical androids who are yet to be seen on stage without their trademark helmets. For at least the past seven years, their heads have been complemented by dazzling LED spacesuits, but now the robotic twosome have joined with Saint Laurent Paris to rock some new threads as part of Saint Laurent’s Music Project campaign.

The outfits debuted in a two-minute teaser video that screened at the Coachella festival last week in Indio, California alongside similar costuming on The Neptunes’ Pharrell Williams and Chic guitarist Nile Rodgers. The ensembles feature stunning black sequinned tuxedo jackets, many shots of which can also be viewed on the Saint Lauren website.

The collaboration follows on from October 2012, when Daft Punk provided an original score for Hedi Slimane’s debut collection at the Saint Laurent spring 2013 showcase. 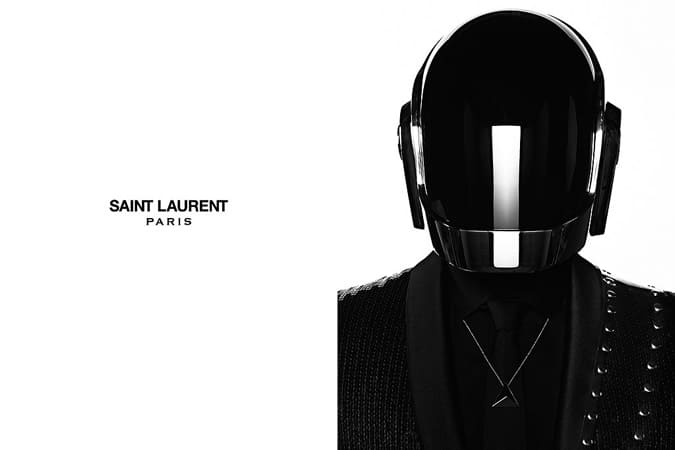