Jackson Pollock has been unveiled as the muse for Dior Homme’s spring 2014 pre-collection. Creative director Kris Van Assche, joined by models Florian Luger and Tim Schuhmacher, pulls on the American painter’s brushstrokes to create a fashionable canvas of modern shirts, ties and suiting.

Crisp white and sharp black tailoring is caressed by vibrant orange, red and blue in contemporary prints. Cut and paste techniques are seen in both colourful pockets and collars, adding an artistic break to otherwise plain ensembles. Stand out pieces include a colour brushed jacket and jumper, as well as a crisp white shirt featuring signature strokes alongside geometric shapes.

The resulting lookbook, entitled ‘Disappear Here’, is a futuristic example; consisting of deserted beaches, metal poles fused to form geometric shapes and the occasional canvas mirroring designs. Simplicity ensures the focus remains on the architecture of the clothing, which evidently does not rely on elaborate backdrops or conceptual editorial narratives.

The mingling of traditional cuts and daring prints defies a traditional wardrobe and sees a dwindling line between the elegance of suits and laid-back style of sportswear. Suit jackets are adorned with hoods whilst shoes are given thick soles to give the feel of trainers. This balancing of opposing styles is what gives the Dior man a timeless, ever modern, style. 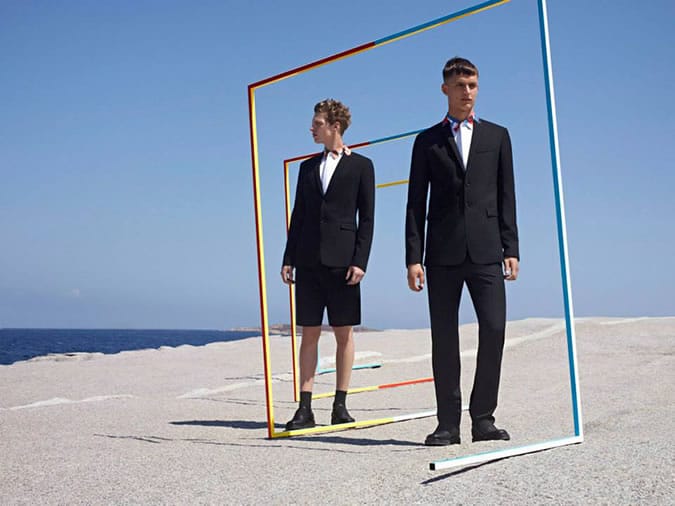 Curtains Hairstyles: Why They Work And Which Style Will Suit You 7 ways to wear the nineties favourite