To think of Versace as having only been around for a mere thirty-five years seems bizarre. In this relatively short space of time, Versace have positioned themselves as one of the world’s leading luxury fashion brands, achieving popularity and acclaim that many of their peers in the world of high fashion can only dream of.

In honour of their constant stream of triumphs that has led to this phenomenal amount of success, Versace is releasing a new capsule collection of fourteen items.

The iconic Medusa head logo features prominently in bold, eye-popping prints that declare allegiance to the brand so loudly it would make even Kanye blush. Yet this collection is not designed to be worn by those who use their outfits to blend in with the crowd – this is a collection that demands a commitment to extravagance from those looking for statement pieces as hypnotising and infectious as their personalities.

Signature Versace sunglasses with the Medusa head emblem applied to the temples (once the favourite eyewear of Biggie Smalls) make a triumphant return, which is perhaps a grateful nod to the recent re-emergence of Versace as the go-to brand within hip-hop, after having experienced a dip in prominence since the golden nineties.

The throwbacks don’t stop there, which is to be expected in a collection born of personal historical celebration, with on trend bombers and bubble jackets also making an appearance, again incorporating Versace’s trademark prints and flair for the lavish.

For those who are looking to join in the tribute in a more subtle and understated way, accessories such as rings, lighter holders and pins are going on sale and boast the same Medusa head and chain imagery in gold, silver and sky blue.

The Versace 35th Anniversary special project collection will be available from Versace retailers for a limited period in September. 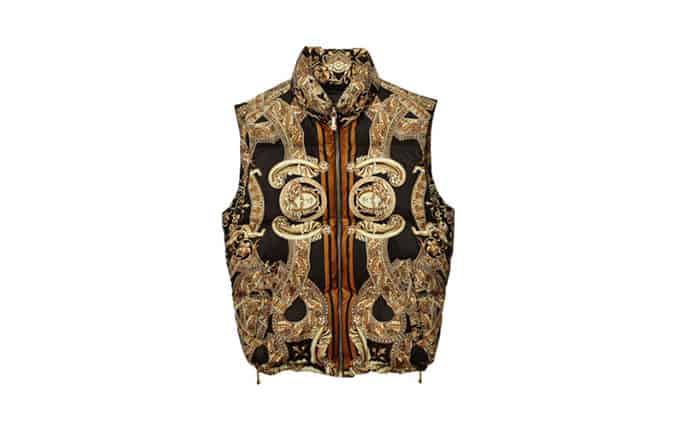