Premium Italian shoe manufacturer Buttero has added pony skin to its footwear range for the first time, using the luxury fabric on two models from its 27-piece AW14 collection.

Both a slip-on chukka and sneaker style shoe use the textured calf hair to create statement pieces in black and blue colour ways.

The mid-cut Leather and Pony Skin shoe, priced at €230 (£180), is constructed with a leather body on top of a white rubber sole and stitching, with tonal pony Skin used as an overlay on the toe and tongue.

The Pony Skin Low Sneaker, based on Buttero’s Tanino cut and priced at €245 (£195), features a cow leather toe, laces and lining, as well as brass-plated metal eyelets and a white rubber sole. The remainder of the shoe’s body and heel is wrapped in midnight blue pony skin.

Buttero was founded in 1974 by Mauro Sani as a maker of riding boots, which it still sells today. As a result, the brand is named after old-time cowboys from Tuscany, northern Italy.

The pony skin trainers, along with the rest of the AW14 line, are available to buy now online and from retailers including Harvey Nichols, Opumo and Oi Polloi. 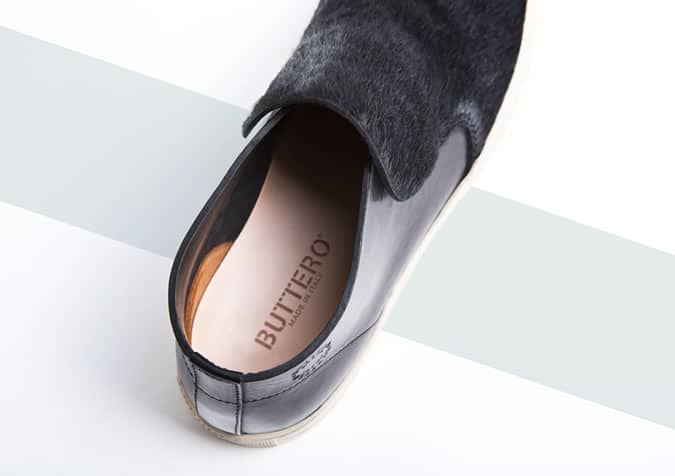