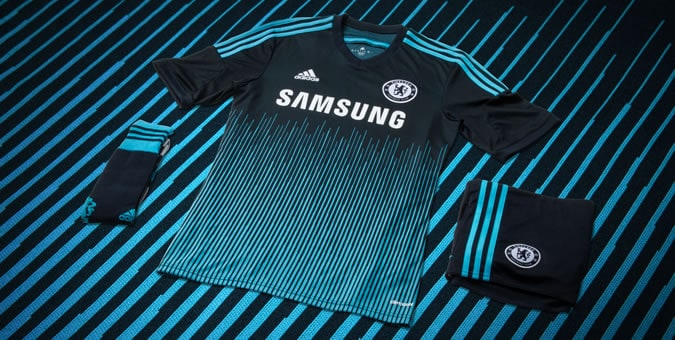 Premier League football club Chelsea has returned to dark navy for its 2014/15 third kit, the first time the club has worn the shade in five years.

The new strip, produced by sports brand adidas, is only the second of its kind for the London side.

It will be worn by the likes of John Terry, Fernando Torres and return club legend, Didier Drogba.

Followers will recognise the colour, which last appeared during a double Premier League and FA Cup win run in 2009/10.

A sound wave design has been used on the front of the shirt. According to a statement, this represents the volume of support from fans.

In addition to the new look, adidas also claims it is lightest Chelsea third shirt ever produced. It uses the German firm’s adiZero lightweight fabric, the same technology used on its Adizero Adios Boost 2.0 trainers, as well as an electric blue adidas Powerband across the upper back to aid stability.

The kit is the final in Chelsea’s reveal ahead of the new season, following on from the new home shirt in April and the new away shirt in June.

Pre-orders are currently being taken online via the club’s official transactional website, ahead of release on the 6th August. Prices for the 2014/15 season start from £55 for short-sleeved versions.