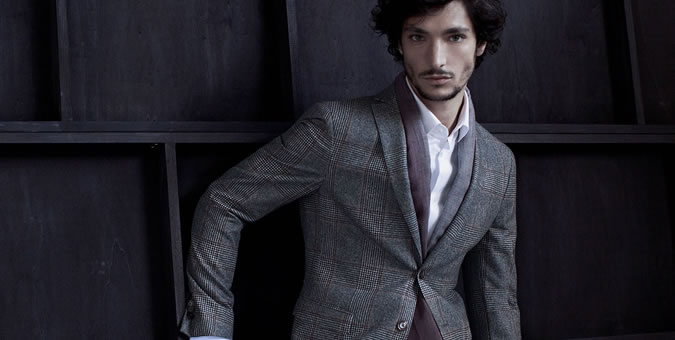 The Tyranny Of The Collar

Human beings – that’s you and I, for the most part – have a love/hate affinity towards necks. We’ve spent a good many centuries devising devilishly intricate ways of exterminating one another by means of choking, garrotting, chopping, twisting and breaking this most slender piece of anatomy, but at the same time we have lavished much art, fashion and jewellery on or around it.

Since as early as the 1300s, the male neck has found itself surrounded by a collar – shortly thereafter accompanied by a neck tie. Back in the 14th century, collars came in the form of a drawstring ruffle that was used to complement the medieval chemise. This evolved into the indubitably camp Elizabethan ruffle, followed by the whisk collar and falling band. During the Edwardian period, ornamental collars were even worn as a form of jewellery.

Yes, attached collars of the type we know and love today didn’t start to get a grip of our collective necks until the mid to late 16th century.

The History Of The Neck Tie

The collar’s partner in style, the tie, can trace its lineage back to the battlefield, where the Romans and also the armies of the first Qing dynasty would use short linen scarves as a means to denominate military hierarchy. It wasn’t really until the 18th and 19th centuries that stocks and cravats became popular, the latter of which developed into a signifier of the wearer’s social standing and wealth due to it being extremely complicated to tie.

Fast forward to 1926 and a New York tie maker named Jesse Langsdorf found upon a method of cutting the fabric on a bias and sewing it together in three sections – and the modern tie was born.

Now, each morning, millions of men wake up, put on their shirts and throw a silk tie around their neck, before furnishing a four-in-hand or Windsor knot (depending on what your father taught you). The act has become second nature to us – so much so that none of us really ask why we wear a shirt and tie. There’s certainly no obvious utility to having a silk rectangle flapping about your chest.

It can still, I suppose, confer good taste/wealth and certainly helps to individualise the wearer’s look in a sea of monochrome suits. It also draws one’s eye to the wearer’s face, while the collar presents their head flatteringly. But how, after some 700 years, have we not found another equally formal and smart way to present ourselves at work?

True, many businesses now have loosened the strictures of the collar, allowing for a much more open and relaxed business-casual dress code, but it seems crazy that after seven centuries there is no widely accepted smart alternative. However, change may be upon us…

Dressing Down The Suit: Keeping The Collar

In recent years, it has become quite acceptable, even ‘fashionable’, to do away with the tie while retaining the collar in fully buttoned-up mode, as opposed to wearing it open at the neck.

In many workplaces, wearing it open sans tie is perfectly reasonable, and for good reason: a little peek of chest beneath a crisp white shirt can look powerful, masculine and elegant while still achieving more than a modicum of formality (so long as you only undo one or two buttons max).

Alternatively, in fully-buttoned mode – which started out as a sort of paean to the unsung style of nerds but has now been embraced across a spectrum of male types – you retain all the formality of the collar without the fusty connotations of the tie.

Andrea Pompilio’s SS15 collection exemplified this perfectly and incorporated punched holes in the collar to add an interesting design element. Even at Brioni, the most classic of Italian tailoring houses, suits were accompanied by prim stubby collars and crew neck fine knits.

Here in the UK at the latest round of London Collections: Men, Hardy Amies’ creative director, Mehmet Ali, also dropped the tie – preferring to embellish a crisp white buttoned-up collar with a silk scarf, which was a prominent theme at all the major spring/summer fashion weeks:

Many brands have adopted the tie-less approach within their new AW14 lookbooks and campaigns, with the trend set to be a key aesthetic this coming party season. As you can see below, the end result still looks extremely smart and sophisticated:

Dressing Down The Suit: Removing The Collar

Yet the question remains: can one look smart, elegant and authoritative at work wearing something other than a collar? In a word, yes! We point you in the direction of the humble t-shirt – whether you buy yours from Uniqlo or Balenciaga, a plain, neutral tee looks unquestionably cool and dynamic layered beneath a suit or blazer. Dare I say it even knocks a few years off you too.

In Canali’s SS15 presentation, there wasn’t a tie in sight. Instead, typically beautiful tailoring was combined with broad white crew necks, sometimes embellished with the aforementioned de rigour silk scarf running neatly beneath the lapels of the jacket.

Elsewhere, Gieves and Hawkes combined a matching pale blue t-shirt and suit with requisite silk scarf for a very sharp look. There was also a collarless granddad shirt on show, again worn with a snappy two-button suit.

At Ermenegildo Zegna, meanwhile, the concept of sport luxe was warmly embraced with loose-fitting grey tees worn beneath pyjama-like suiting, while ties were replaced with neckerchiefs. Over at Louis Vuitton, Kim Jones opted for roll neck sweaters, which added depth to neutral double-breasted suits:

Again, this is a look that has widely been embraced by brands, who have chosen to dress-down their tailoring with v/crew neck t-shirts, thin gauge knitwear, roll necks and even casual footwear silhouettes such as worker boots and trainers:

I suppose the one stumbling block to wearing a t-shirt – and to a lesser extent a sweater or fine gauge knit – with a suit is the moment you decide to take the jacket off. The formality of the collar and tie doesn’t disappear when you remove your blazer, but the same cannot be said for a t-shirt.

Beneath the suit it’s an interesting and confident addition to the real estate of the neck. Without the suit, it’s just another tee. Can you imagine an office full of men all wearing t-shirts of varying quality and styles tucked into their suit trousers – or worse, hanging loose? That’s before we even take into consideration body shapes.

The bottom line is there are excellent alternatives to the collar and tie that we really should be exploring more. These simple necklines can look superb with classic tailoring, especially when combined with a silk scarf, but one needs to think carefully about how the look breaks down without the structure of the jacket to keep it all together.

It’s definitely a look to play with over the coming twelve months though, especially if weekend tailoring is your thing.

So, what are your thoughts on dressed-down formal wear? Will you be welcoming this trend with open arms in the New Year, or sticking with the safety of a shirt and tie?

Let us know your thoughts in the comments section below…

The Ultimate Guide To The Peacoat
2