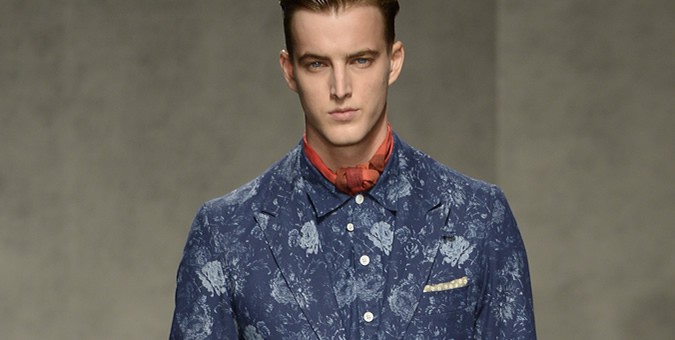 Oliver Spencer bought Brazil to the capital for the second day of London Collections: Men. The British brand previewed its latest collection with a carnival, complete with a live samba band and costumed dancers.

Barragan, who passed in 1988, was best known for his modernist designs and minimal structures in bold colours.

Spencer took inspiration from the artist’s use of light, form, space and vibrancy as reference points for the collection, which includes shades of blue, red and yellow paired with whites and oatmeal.

FashionBeans spoke to Spencer backstage moments before the show. When asked about Barragan’s work, he said: “His artwork is very inspiring, I love the colours, I love the blocks. It is kind of like colour without the force and I really drew inspiration from that.”

“Blocks of colours, we do a lot of colour-blocks, just his use of feeling and texture,” he added.

Spencer also commented on the lively staging, saying the use of the samba band was to “get rhythm out there.”

“I know that he is Mexican and samba is Brazilian but that didn’t matter to me. It’s all about the south American feeling.”

The self-taught tailor confirmed plans to do more performance shows in the future, focusing on different artists, saying: “It gives total rhythm to everything.”

SS15 includes a Buffalo Jacket in suede and cotton, as well as Spencer’s favourite artist’s smock, a new shirt with a relaxed fit and dropped neckline.

Spencer confirmed the new line will drop into Oliver Spencer stores and online at oliverspencer.co.uk from December 2014.