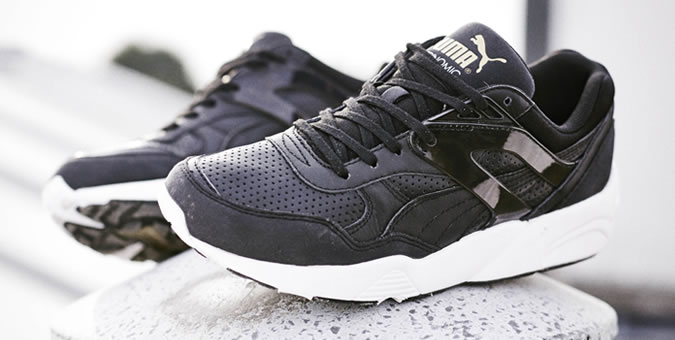 Sportswear giant Puma has delved into the archives for its latest launch, reworking a selection of its iconic Trinomic silhouettes in a monochrome palette.

The R698 and Disc Blazer have been brought back from the nineties as part of the ‘Black and White Pack’, holding onto their original detailing and construction for the new release.

First up is the R698, which comes in an all-over black colour way finished with a white rubber sole and toffee-coloured gum accents.

Joining it is the Disc Blazer, an equally chunky shoe that was extremely popular in the 1990s due to its futuristic design. For spring/summer 2015, the trainer sees itself re-imagined in all-over white and coloured-blocked black options, complete with Trinomic cushioning for comfortable wear.

While these understated styles are sure to capture the eyes and hearts of sneakerheads, they’re also able to hold their own in the sporting world thanks to the addition of Trinomic shock absorption technology, designed to deliver optimum stability.

The Puma Trinomic Black and White Pack is available now at ASOS and Foot Asylum, with the R698 priced at £65 and the Disc Blazer priced at £110.