8 Ways To Wear An Oxford Shirt

If you were asked to name Scotland’s greatest contribution to menswear, what’s the first thing that comes to mind? Jumpers? Brogues? Kilts…?

Whatever it is, it’s probably not Oxford shirts. Despite its name, the Oxford shirt’s origins can be traced back to 19th century Scotland, where factories experimented with weaves to create four new styles, each named after one of the four best-known universities at the time: Yale, Cambridge, Harvard and Oxford.

If you don’t recognise the others as shirts, you’re not alone – only the Oxford has proved popular enough to not be cut from production. Known for its basket-weave pattern, the Oxford is woven from two different strands of yarn (which gives it that distinctive marled appearance) and often, but not always, features a button-down collar.

It’s changed a little since it was first introduced – your average Oxford no longer comes with a detachable collar and cuffs – but not that much considering we’ve been wearing them for well over a hundred years.

The secret to the Oxford’s longevity is its versatility. Here are the best ways to wear one: some obvious; some unexpected.

Lightweight chinos in neutral and pastel shades work best. Never wear a red pair, unless your name’s Teddie or Seb, you wear a signet ring and you may or may not have once stuck something in a pig’s head that you really (really) shouldn’t have. Unlike smart twill shirts, Oxfords are characterised by their slightly coarser texture, something which makes them the perfect partner for knitwear you can really sink your teeth into.

Mid- to heavy-gauge jumpers work best for layering over an Oxford shirt, creating a look that delivers on function (it’s warm) and form (it adds more visual interest up top). When choosing colours, always opt for tonal variations, or clash them like you mean it. 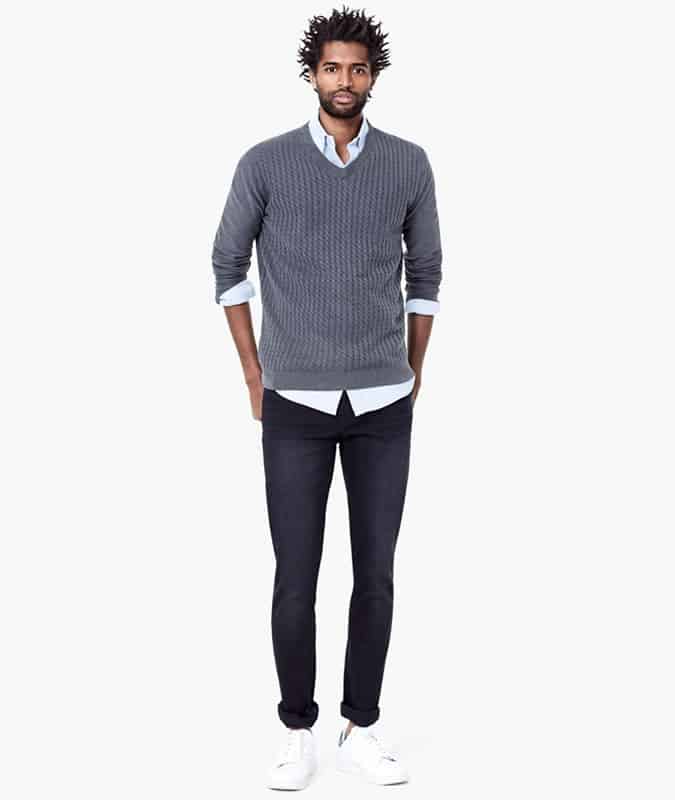 Open Over A T-Shirt

Before they became standalone layers in their own right, T-shirts were worn under shirts, so this styling trick – although popularised by the likes of Kurt Cobain and 1990s skate culture – is a lot more vintage than you might first think.

For all its alt vibes though, this look runs the risk of coming off like a surly teenager on his way to band practice (and not in a Gosha Rubchinskiy way), so take care that the T-shirt’s relatively plain and the shirt not so baggy in fit that it looks like you’re waiting to grow into it. With A Technical Jacket

One of the Oxford shirt’s main draws is its versatility; as inherently preppy as it might seem, it still works styled with pieces that skew more long-haul trek than lecture hall.

Try layering a checked or rich autumnal coloured style under a parka or padded bomber jacket for a smart-casual mash-up that’s equally at home on-campus and in the country. Purists might argue otherwise, but wearing an Oxford shirt with a suit isn’t a sartorial sin. Sure, its button-down collar might read more casual than a flyaway, but – and most of you will know this providing you haven’t been hiding under an inordinately large rock for the past year – tailoring has been shrugging off its stuffiness lately, so styling tricks that dress-down your two-piece aren’t so much off-key as on point.

One proviso: the suit needs to lean casual itself, so don’t try teaming an Oxford with super-sleek wool-silk suiting. If the thought of meddling with sartorial codes makes you break out in a sweat, swap a full two-piece for separates when smartening up your Oxford shirt.

This slightly more casual take on tailoring chimes better with an Oxford’s coarser finish weave and button-down collar. As with a full suit, choose fabrics (wool, tweed, cotton twill and corduroy) that make the most of an Oxford’s off-duty quality, rather than jar with it. Although closer to tailoring than a tee, a textured shirt like an Oxford won’t look out of place styled with pieces that look rougher than a suit.

Tip your trucker cap to all-American style by teaming an Oxford with a T-shirt and jeans, then layering a Borg-collar jacket on top. Finish with a healthy smattering of stubble and some leather work boots. NB: Don’t actually wear a trucker cap. OK, hear us out. As ‘art teacher’ as this combination might sound, done well it really pays dividends. Execute this properly, and you’ve got a slick and sophisticated look that leaves no one in doubt of your layering mastery.

The trick, as with all complex layering moves, is in the fit. Start with the roll neck – a fine-gauge merino wool version works best (mid-gauge might work at a push, but anything heavier is off-limits) – which should be one colour and fitted enough to huge your torso. Then layer over an Oxford that sits firmly on the smarter end of the spectrum (swerve boat stripes, pastels and anything else that sends this finely tuned look out of whack).