Our pick of the kicks, from a dessert-patterned skate shoe to the ultimate summer sneaker line
Image: Nike Free Mercurial Superfly
By Warren Beckett 04 April 2016

We can count our favourite Slovakian sneaker brands on the fingers of Sir Ranulph Fiennes’ frostbite-ravaged hand. But the undisputed champ is Novesta, which has handmade its canvas lace-ups in the same factory since 1939.

Its hallmark is the press-and-seal sole, where sustainable rubber is moulded to the upper to leave a unique tyre tread pattern. We’re as taken with them as YMC, the pair teaming up for a collection that marries Novesta’s craftsmanship to the brand’s favourite SS16 fabrics, from woven indigo to Hawaiian patterns.

Available at YMC, priced from £60. 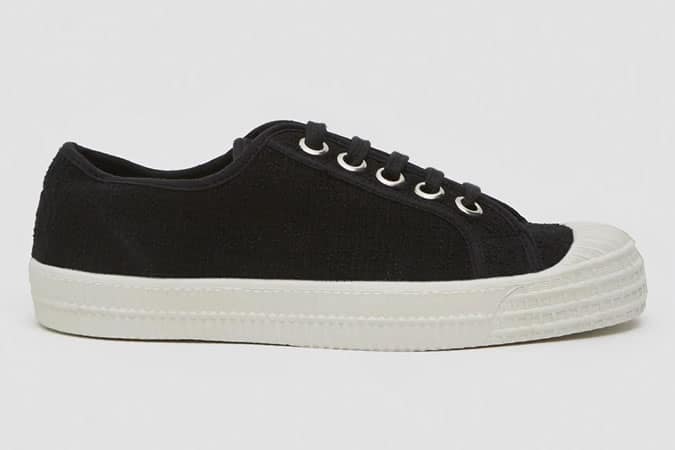 The Air Presto seems more popular today than it did even during its original release, way back in 2000. Nike pre-empted the current trend for sock-like uppers and the Presto is probably the best version of this foot-swaddling style.

The recent all-black colourway flew off the shelves, so expect the all-white version to do the same. This iteration has dispensed with the classic neoprene upper and replaced it with an aptly futuristic mesh fabric. Touches of 3M on the heel pull add to the sleek design, with the only non-white feature a practical black heel insert. The NMD is one of adidas most grail drops, and since it debuted in 2015 the shoe has enjoyed a steady flow of new fabrics and colours. Recent Primeknit and mesh versions proved just as popular as the OG, proving that this shoe is still worth dropping some cash on. When Nike launched its calf-climbing Mercurial football boot, on Cristiano Ronaldo’s feet, we prayed for a day when the silhouette would appear on a shoe without studs. Well, thanks be to Mark Parker for the Nike Free Mercurial Superfly.

If you use it as intended, then the Free sole and knit upper will provide all barefoot running’s benefits, without a foot full of gravel. But with that monochrome colourway and space-age shape, we’d be more partial to slipping them on beneath a cuffed jogger and longline tee. Stunting still counts as exercise. Yohi Yamamoto’s atypical take on trainers mixes the best features from adidas shoes with the most cutting edge elements from his own eponymous label.

In the Y-3 Pure Boost, that means ultra-light knitted uppers, set atop the adidas Boost midsole. The monochrome colourway makes this one of the most versatile and wearable Y-3s to date. Proving that, these days, skate is more an aesthetic than an actual activity, Nike’s introduced a sweet tooth-satiating colourway to its SB Dunk.

The Premium Waffle boasts an upper patterned like its namesake dessert, with the Swoosh doused in a liberal serving of syrup. There’s also a lightweight, cushioned midsole, which would technically give you more control of the board under your feet. But we all know you’re not going to scratch these up in the park. How To Layer Clothes In Summer To Look & Feel Cool
2

Behind The Wheel: The Bentley Continental GT Is this the most luxurious car on sale today?