We head to the Blues' training base to learn more about the new watch hitting the net, and how players including Hazard and Matic will be wearing theirs
Watches 19 April 2016 By Jamie Millar (@mrjamiemillar)

Only a very exclusive club is granted access to Chelsea’s state-of-the-art Surrey training ground. To get past security, you have to be a real player – whether a footballer or a brand partner. Although we live in an age of advertising saturation and official noodle sponsors, ask the staff around Chelsea’s complex how often they entertain corporate interlopers and the answer is “not very”; and even then, the manager – at the time of writing, veteran Dutch coach Guus Hiddink – retains absolute power of veto.

Clearly, Hublot is a name that opens doors. The luxury watch marque has, on this occasion, leveraged its special relationship to invite a select crowd of media and valued customers to the launch of the limited edition Classic Fusion Chronograph Chelsea – the first timepiece to celebrate the pair’s team-up. After the unveiling, the assembled go pitchside to watch the squad in simulated action. (No pictures are allowed of the session lest they betray any sensitive tactical information, a rule that dates back 10 years to José Mourinho’s first tenure.)

At one point, bad boy striker Diego Costa forcibly boots a ball against the fence right next to the spectators, like an animal in a zoo rattling its cage in protest at being observed. (Or possibly just for kicks.) Maybe that’s why he’s not among the players – Eden Hazard, Cesc Fàbregas, Nemanja Matić, Bertrand Traoré and Pedro – who join the party for a penalty shootout competition. A Hublot banner is strung across the goalmouth, with cutouts of varying sizes worth 30, 50, 75 and 100 points respectively. If you want to see professional journalists – your correspondent included – act like overgrown schoolchildren, just place them in the vicinity of professional footballers. Once the frenzied flurry of requests for selfies and autographs subsides, five teams are picked, with each one allocated a suspiciously talented ringer. (FashionBeans got Hazard. We’ll let you decide whether that is a good or bad thing this season.)

Then, donning a pair of incongruously bright red trainers with his sober suit, Hublot CEO Ricardo Guadalupe steps up and, with aplomb, slots the first penalty through the 75-point hole like a boss. “Football is a very important sport for Hublot,” Guadalupe explains to FashionBeans after Traoré’s team has unexpectedly claimed victory. (Eden, what happened?) “To partner with iconic teams is a key element in our strategy, and particularly to be linked with London.” Indeed, between Chelsea and its other clubs – Bayern Munich, Paris Saint-Germain, Juventus and Ajax – Hublot could set up a pretty respectable European Super League in its own right. And with its bets broadly spread, tribalism is less of a concern.

It’s not so much tactically astute, more an open goal to tap into the supporter bases of some of the most followed sides in the most popular sport on the planet. But if you turn the clock back to when Hublot made its football debut in 2006, it looks more forward-thinking. With the exception of Roy Keane’s prawn sandwiches, the game was, despite its beauty, not readily associated with luxury. And for Hublot, a brand that in Guadalupe’s description was looking to be promoted from the fourth division to the first, it was a shot at the big time. Perhaps realising that sponsorship of the Swiss national team wouldn’t provide the desired level of exposure, Hublot became the timing partner for Euro 2008 in Switzerland and Austria, plus the 2010 World Cup in South Africa. For the 2014 World Cup in Brazil, Hublot devised referee boards in the shape of its timepieces, which got it the kind of airtime that even billionaire Chelsea owner Roman Abramovich couldn’t buy. (Somewhat surprisingly, he’s not really into watches, according to Guadalupe.)

Now literally and metaphorically in the Champions League, as official watch partner, Hublot’s association with football will also extend to this summer’s Euro 2016. But it’s not just a numbers game, nor is the relationship as arbitrary as that of the aforementioned noodle sponsors: football befits the high-octane nature of Hublot as contrasted with its staid rivals. “I always take the example of polo,” says Guadalupe. “It’s very luxurious, but watching it is much less exciting. That’s why we said, ‘Let’s do football.'”

It has to be said that football-supporting watch brands often score own goals by just slapping a club crest on the dial. “We always want to be different,” smiles Guadalupe. So, in the case of the Chelsea chronograph, instead of a badge, there’s a lion at 12 o’clock (the team’s mascot) and a blue face that is bang on Baselworld trend. It’s a robust blend of swagger with elegance – much like the team’s play in its pomp. “It’s understated: a Chelsea touch but not too ‘fan’,” says Guadalupe. “It’s a great result.” 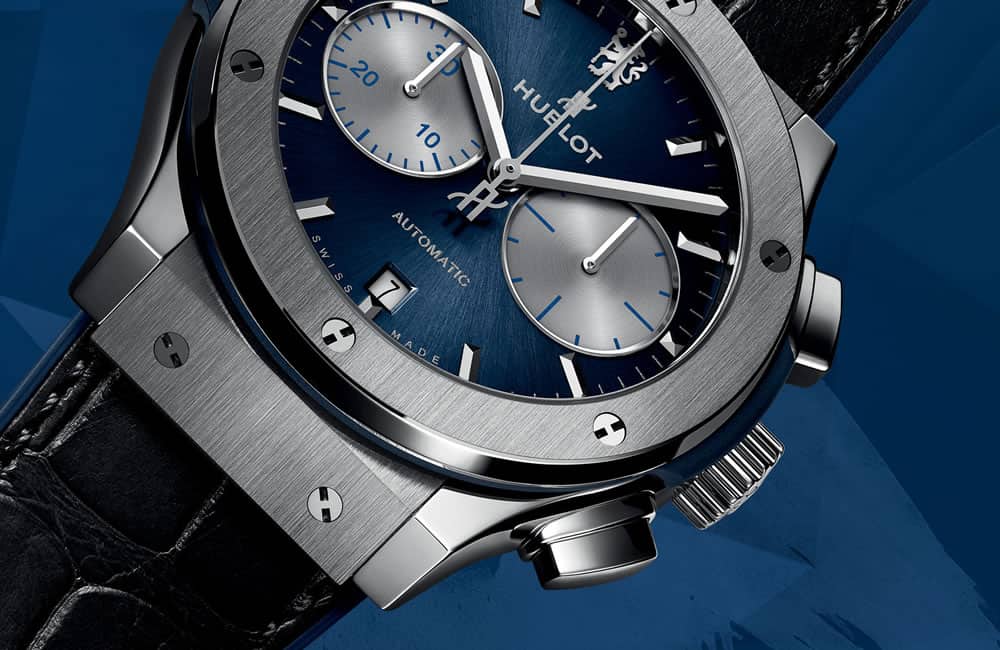 Like a fox in the penalty box, Hublot has positioned itself intelligently: not only are footballers among its potential customers, but they’re also, rightly or wrongly, contemporary tastemakers. Years after his retirement, David Beckham continues to exercise an enormous influence on how men dress, while trends from man-buns to tattoos can be traced back to the pitch (and usually Beckham). Thankfully, the players themselves are fans of the Classic Fusion – not that they’d admit to being anything else.

“It’s beautiful, like Chelsea,” says the impudent Hazard, self-consciously toeing the party line with an air of mischief, before adding more sincerely, “It’s not too heavy, it’s not too big; for small guys like me, it’s good.” Matić meanwhile provides a level of insight beyond that of most obvious-stating football pundits: “I think you can wear it casual and also smart. It’s good for every moment.”

“One of the best brands in the world”, Hublot was already familiar to Matić, who owns a couple of watches. But timepiece one-upmanship is not a much-played sport in the Chelsea dressing room – at least not as much as it used to be. “Now with the watches is finished: Didier Drogba is not here anymore, and Samuel Eto’o as well,” says Hazard. “They like the watch. Every day they change.” “Maybe it’s fake?” queries Matić. “Yeah, maybe.”

With the final whistle approaching, there’s just long enough to ask Hazard for his style tips. “Tracksuits,” he says. “Every day. I have to be comfortable.” (“Eden wear only Nike,” confirms Matić.) And when the Belgian goes out? “I never go out. It’s true,” he insists, in response to laughter at what is perceived to be protesting too much. “Professional. Three kids.” It’s reassuring to know that even footballers can be time-poor.