Our pick of the kicks, from woven suede, to seersucker sneaker, to Mr Motivator-ready neons
Image: Filling Pieces
By Warren Beckett 31 May 2016

Inspired by the seersucker suits of the spectators at the Kentucky Derby (and their residences in millionaire’s row) the latest rendition of the GEL-Lyte III and GEL-Respector models take their cue from “the most exciting two minutes in sport”.

Both silhouettes feature seersucker uppers accented with a terry cloth sockliner, as well as an off-white midsole and laces. A smart alternative to the ubiquitous all-white summer trainer. 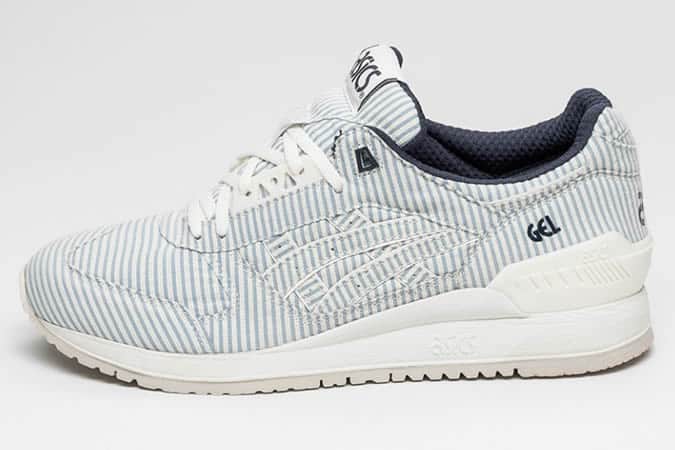 The Three Stripes’ latest queue-round-the-block model gets an unexpected spin. It’s only been a year since the original NMD dropped, but we’ve already seen so many versions you’d be forgiven for thinking the guys in Munich were running on creative fumes. Apparently not.

In fact, we get an entirely new NMD silhouette, which follows the rest of adidas’ stable with a City Sock treatment; black primeknit uppers, a Boost Technology sole unit and blue tab details at the midsole. Is this the best version of the NMD yet? The Nike Sock Dart, originally released in 2004, was one of the first styles to feature knit uppers – a now inescapable trend in the world of trainers. The Sock Dart reappeared in 2014 in design collaborations, but it wasn’t until this year that it got a proper re-release.

The stretchy knit upper offers some serious performance benefits, as does the translucent forefoot strap and speckled white midsole. Although you’re not actually going to wear them to play sport, obviously. After all, you might muddy up the eye-wateringly bright uppers. Well, the Sock Dart was never about blending in. Can you wear trainers with a suit? Well, yes. So long as they’re minimal and the suit isn’t tweed.

In a move away from the more outlandish designs that the brand built its name on, Filling Pieces has just released a pared-back range of kicks that would sit easily with tailoring, and anything that’s more sartorial than street.

Here its signature Low Top silhouette is crafted from hand-woven brown tanned suede, with premium matte brown tanned nubuck on the upper. Now you just need to find a two-piece that deserves them. For SS16, Common Projects’ iconic Achilles sneaker gets a metallic makeover, with its premium Italian leather upper done over in silver, complete with an equally shimmery sole unit.

By carrying the metallic finish all the way through the shoe, it almost – almost – stays true to Common Projects’ minimal design ethos. If you consider the Tin Man to be an icon of less-is-more dressing. What Colour Shoes To Wear With Your Suit: A Definitive Guide