Life may begin at 40, but it’s often a marker at which personal style dies. Unless you’re Ryan Reynolds, that is. The recent quadragenarian gave a textured masterclass, combining an olive suede jacket up top – an easy way to flex the green trend – with staple pieces below. Patrick Schwarzenegger is of impeccable stock. Not only did his father deliver some of cinema’s most ridiculous lines, he’s also the great nephew of JFK – a fact that bodes well for his wardrobe. At a Bottega Veneta dinner, the 24-year-old made a printed two-piece wearable by keeping the rest of his outfit minimal, finished with a crisp white shirt. Zachary Quinto may have revived bowl cuts and Lycra in the new Star Trek movies, but thankfully, he paints a prettier picture off-screen. The 40-year-old chose to boldly go where few men have gone before, teaming a colourful geometric polo with a dark wine two-piece. Which sounds terrible, but works as a 1970s-inspired look that might just live long and prosper. No, you’re right, John Legend never has a day off. While most human beings leave long-haul flights bleary-eyed in the ugliest loungewear known to man, Chrissy Teigen’s fella upgrades to first class. This time, in a monochrome look made memorable by texture to the jacket and flashes of white. Eric Rutherford: we’re not quite sure why he’s famous, but in looks like these, who really cares? The model-actor-professional-step-and-repeat-attendee pivoted from the norm without falling foul of the dress code, switching a shirt for a roll neck and heading double-breasted from tailor Chester Barrie for a more flattering fit. The new Erdem collab at H&M isn’t all flowers and ruffles. Okay, so it kind of is. But that didn’t stop True Detective star Kitsch bucking the trend in a classic monochrome getup. The 36-year-old tucked a well-fitting tee into some speckled trousers below, clinching that elusive smart-casual sweet spot without trying too hard. Obviously the Hollywood physique helps, too. Where: Only The Brave Screening, NYC

Not satisfied with battling blazes in his latest flick Only The Brave, Miles Teller brought the flames to the New York premiere, too. Though instead of fire engine red, the 30-year-old doused the vibrancy with a well-fitting rust two-piece that’s more a crackle than a roar. It’s even enough for us to forgive him for that slightly off tie knot. 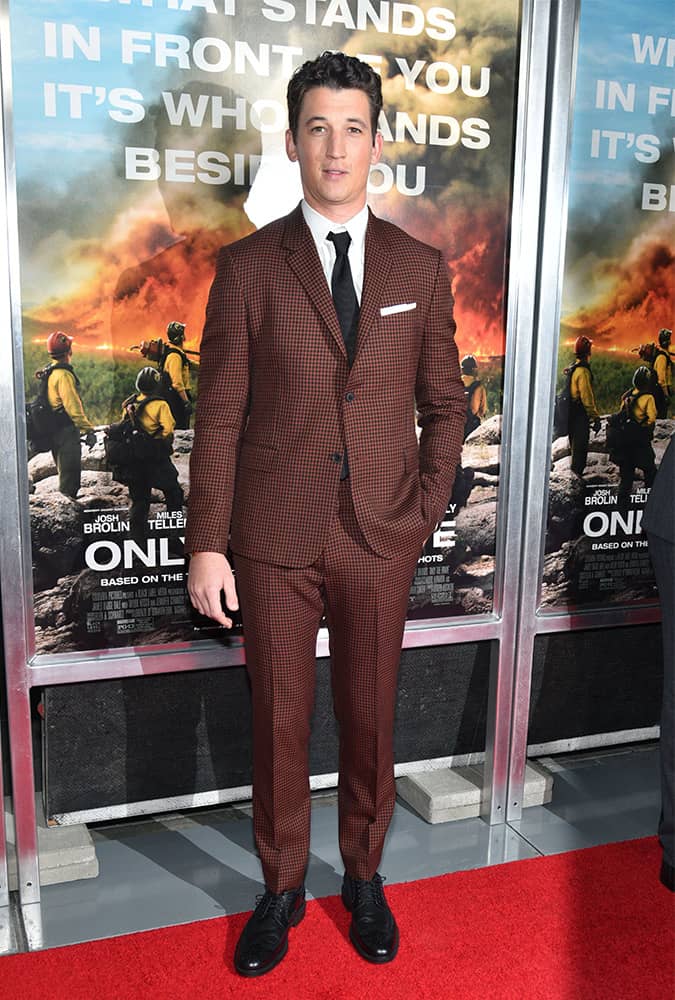 These days, Joe Dempsie is more than the plothole-ridden messenger boy in Game Of Thrones. At the photocall of his latest Fox show, Deep State, the British actor went from bannerman to bossman by dressing up the humble long-sleeved polo. Tailored slacks below give the outfit a much-needed formal lift, while sockless brogues are just the right side of smart-casual. Watch out Jon Snow.