The Best Haircuts For A Receding Hairline

It's not over yet...
Mr Porter Journal

A receding hairline doesn’t have to mean reaching for the clippers and ending it all. Unlike, say, a completely bald crown, there are lots of ways to style out an expanding forehead with the hair you’ve got left.

Losing Your Hair is a factor – more often than not hereditary – that can affect a man’s self-esteem. And while one look at Jason Statham should solve that, there are multiple cuts that will flatter a receding hairline and prolong your locks.

“With the right cut, there are several ways you can balance out a receding hairline,” says Bruno Gonclaves Ribeiro, head barber at Ted’s Grooming Room. “For a casual but neat look, ask for an all-over scissored cut to create the illusion of thickness. Retreating scalps also benefit from a classic sweep back to draw attention away from the forehead, while still embracing modern trends from the likes of Daniel Craig.”

If a good cut is the right foundation, consider choice product your cement. “Use a hair putty to make your hair appear thicker in texture. This will add lift and volume, while ensuring your style remains in place,” says Ribeiro. “Avoid using a greasy, dense wax or gel as this can make hairs clump together, which gives the appearance of thinness.”

With the advice under your arm, get ahead with some of the best cuts in the book for receding hairlines. The Best Men's Taper Haircuts - As Recommended By Barbers

Get a classic style that suits practically everyone. The Biggest Men’s Hair Trends For 2020

A trip to the barber is your simple first step to making this year your most stylish yet. From the barber who actually cuts their hair. 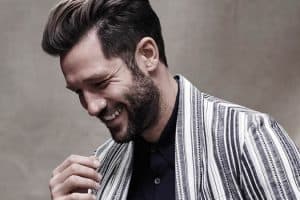 The all-time classic cut for men has got a new lease of life - here's how to get it. Get your spirit level at the ready and discover how to embrace one of barbering’s most interesting and challenging creations.