Where: Museum of America Pop-up, LA

It can be hard being the younger sibling, living in the shadow of your big brother’s great successes like, erm, The Interview. But Dave Franco has a great career, you go Dave Franco. And he’s certainly bossing it in the style stakes. As a suiting option, all black can either go the way of being too boring or too formal. But introduce a bit of colour, courtesy of a graphic print shirt, and you can achieve easy style mastery. Where: Museum Of America Pop-up, LA

Side-stripe trousers are racing hot right now, and Jared Leto pulls them off with aplomb, using his checkboard Vans to highlight the colour of the stripe. Up top, no self-respecting rockstar would be caught without a leather biker jacket, while the cream jumper tones everything down because even the most rock ‘n’ roll of us need a little zen. Superhero suits don’t have to contain compromising Lycra. As Avengers star Tom Hiddleston shows, sometimes all you need is a navy pinstripe two-piece. The fit on this Polo Ralph Lauren two-piece is relaxed and complemented nicely by the slightly wider stripes on his light blue shirt, which proves pattern mixing can be easy. And obviously, it has to be brown footwear to go with the blue. Picture the scene: you’re a super-spy in Monte Carlo for a winner-takes-all poker match against your sworn enemy, international model Johannes Huebl. You’re trying to concentrate but Huebl’s damn suit jacket keeps dazzling you into submission. And he’s only gone and teamed it effortlessly with a laissez-faire sky blue dress shirt and his favourite monk strap shoes. You win again, Huebl. We’re going to try and get through this without referencing the singer/actor/all-round triple threat’s admittedly fantastic surname. What’s also fantastic is his sense of style, shown here by a well-fitted navy suit – not too tight, not too baggy – with a breezy patterned shirt that is tonally spot on. What an absolute style legend. Oh, look what you’ve made us do now, John. 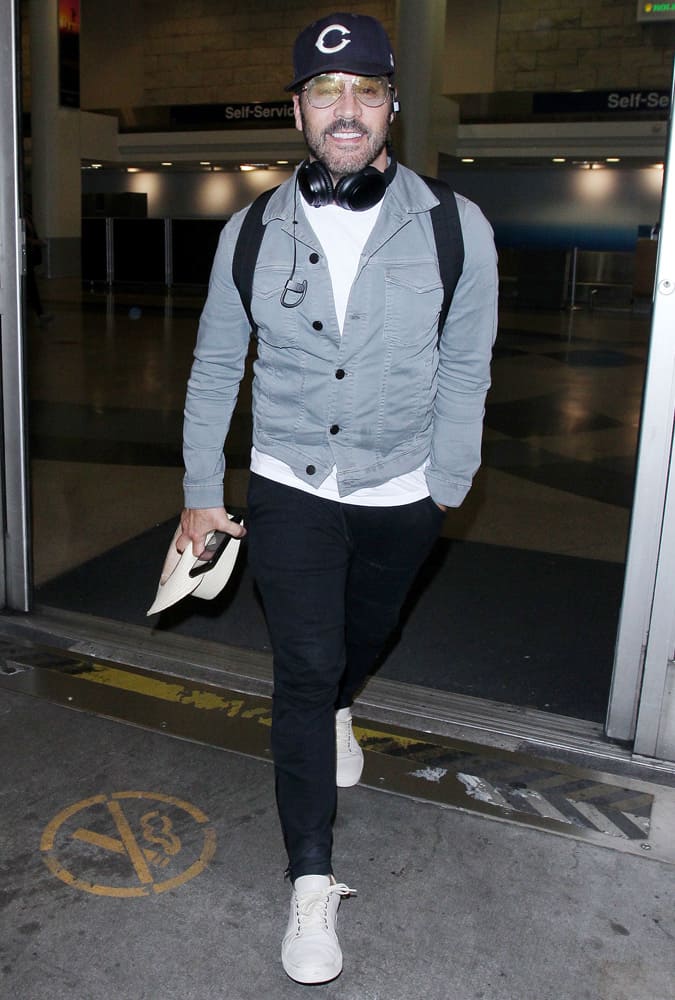 Proudlock was always the rock and roll one out of the Made in Chelsea crew. Granted, that’s not saying much. It’s like pointing out Prince Harry as the most fun royal – the competition isn’t exactly fierce. Here, the all-white base is toned down by a fitted leather jacket, complete with tonal shearling collar to add interest. And those kicks are pretty sweet too. He might not be Keith Richards, but the lad’s doing alright. Formula One ace Lewis Hamilton is an odd one when it comes to fashion cred. His outfit choices miss the mark more than North Korea’s missiles. But clad head to toe in Tommy Hilfiger, this look proves to be a surprising success. They’re some of the best side-stripe trousers we’ve seen since the trend began, and the design on the shirt chest breaks up what could have been a cautious getup. Think back to the fashion of early nineties rap and you’ll likely be bombarded by nightmarish scenes of stomach-churning Aztec prints, oversized gold chains and faux leather harem pants. While we may have waved goodbye to the dubious style of main perpetrator, MC Hammer, others have rightfully lived on, including rapper Nas, who opts for a rather timeless getup here. The hem of those trousers could come up an inch or two, but all black with a grey roll neck always works well, and check out the gold buckle on those loafers – a little bit of bling to pay homage to his 1990s hip-hop counterparts. Made famous by having 30 fame-hungry ladies chasing him like a more civilised Lynx advert, the star of The Bachelor knows how to dress right. Here, he performs a near miracle by pulling off double denim, once considered a cardinal sin in the fashion bible. For easy Americana, the trick is to go dark on both your shades of denim and then break it up with a simple white tee, while combat boots always look strong with jeans.