Introducing the masters of menswear…
By Richard Jones 20 April 2018

Model Oliver Cheshire is the cat that got the cream. A job that takes him to all corners of the globe, a popstar girlfriend and a ticket to the hottest festival of the year, Coachella. But above all that – certainly in our eyes – is his profound ability to nail festival-wear. His outfit’s neutral pastel tones are easy on the eye, while the arm stripes and contrast colouring give his knitted polo shirt an athletic, riviera-inspired look. You don’t have to go Gucci on the trainers but here they act as a welcome statement in an otherwise understated look.

You have to wonder how Spiderman actor Tom Holland takes that skintight costume off after a long day of filming. No such problems for him with this outfit mind; he’s paired an easy-to-wear plain white tee with straight-leg dress trousers. On its own, that combination might have been a little too informal for the premiere of his latest blockbuster, but the addition of a beautifully cut thigh-length Thom Browne coat – almost like an elongated suit jacket – brings some regal formality to proceedings. Actually, he might have some trouble wanting to take off a jacket that splendid. 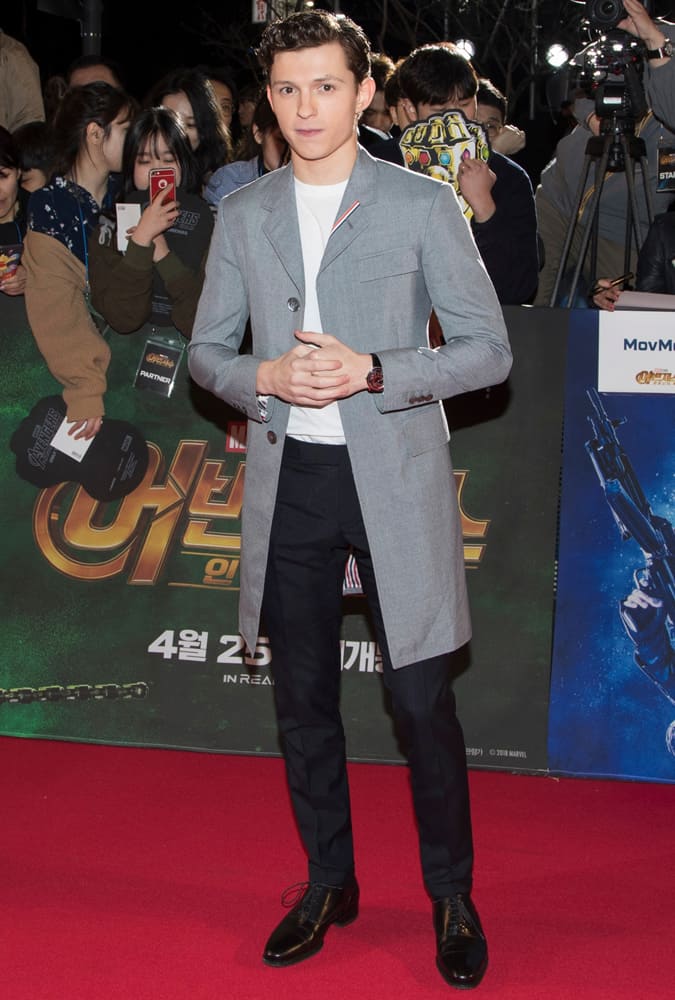 Those terrifyingly precocious Stranger Things kids are always hogging the limelight. But their co-star Charlie Heaton deserves some attention too, not least for showcasing a modern-day take on louche 1950s rockabilly style here, in California. This outfit is peak Heaton (is that a thing? let’s make it a thing) as he wears a retro striped shirt tucked with little care into a pair of cropped trousers. The double shirt rarely works – check former Donald Trump advisor Steve Bannon’s nightmarish take on the look – but Heaton shows you how to do it right, namely with a Levi’s denim shirt over the top that acts as a makeshift jacket. Rapper 21 Savage allegedly chose his hip-hop pseudonym because he thought it would look good on Instagram (the 21 part comes from the name of the gang he was part of growing up, although he was also shot six times on his 21st birthday). This outfit is also sure to pop on your iPhone screen – a psychedelic palm tree extravaganza. But you don’t want to go too crazy and risk looking like the third trumpeter in Funkadelic, so follow Savage’s lead by picking out a base colour from your jazzy shirt (here it is black) and execute the rest of your outfit with said foundation. Gucci have seemingly cracked the millennial code, helping the social media generation stay Instagram worthy with a gaudy smorgasbord of electric colours and glam rock influences. A model millennial himself, Schwarzenegger attempts to step out from his dad’s shadow with this in-your-face blue tracksuit. It’s certainly a statement and one that only works when everything else is tuned down, i.e. plain white socks and trainers. As the shorts are getting shorter and shorter over in the Californian desert, model Sean O’Pry is keeping his neck toastie with a roll neck in New York. While it’s about time to wave goodbye to this winter staple for another season, O’Pry gives it one final glorious hurrah, pairing it with a slim-fitting navy pinstripe suit. Matching the brown hue of his watch strap with his brogues is another formal masterstroke in an outfit that has us wishing the sun would momentarily go away and let us look this suave again. Where: The Contenders Emmys, Los Angeles

Let star of BBC crime drama McMafia James Norton take you on a whistle-stop of how to dress casually, firstly with plain white sneakers and T-shirt (please make sure it’s clean and ironed otherwise casual becomes Netflix-bingeing-in-a-pool-of-Doritos) and a comfy cardigan thrown over the top. If that outfit sounds a little too drab, then put on some natty chalkstripe trousers like Norton. Casual done well. After years of hard graft, you’ve finally created the world’s first time machine. You decide to travel to a gentlemen’s club circa 1962. As you enter the room you’re immediately met with a familiar face standing at the roulette table – international model Johannes Huebl. How on Earth did he get here? Wasn’t he born in 1977? But not only that, he fits in effortlessly, with a dainty cravat tied nonchalantly, super-luxe cardigan and the finest thigh-length jacket you’ve ever seen. Whereas there you are in beat-up sneakers. Damn, you win again Huebl. We agree that Colman Domingo sounds like the name of a long lost knight of the realm who fights for fair maiden’s hearts with just the tip of his joust and his extremely twirly moustache. We also agree that the Fear The Walking Dead star is showcasing some serious style here, and just about getting away with those shiny Chelsea boots thanks to the jet black in the rest of his outfit. By the way, we’ll joust you for that leather jacket, Domingo. Where: The Contenders Emmys, Los Angeles

Whatever you think about his comedy chops, The Late Late Show presenter James Corden is a snappy dresser with a fine array of suits to aid his presenting duties. This is more dressed down for Corden; he pairs a loose fitting T-shirt and trousers with plain white sneakers (why do they keep propping up this week? Probably because they work with an array of looks) and a blazer with a racing green trim that helps break the outfit up a little bit. The T-shirt could be a little crisper but we’ll forgive you if you let us appear on the next Carpool Karaoke.