Style in Britain is invariably described as eclectic thanks to Brits’ melting pot attitude to personal style and our willingness to dress as a statement of personal expression. While style will come in different shades across the length and breadth of the country, nowhere is this patchwork approach to dressing more apparent than in the London, a place where dress sense is as diverse as the 300 languages spoken in the capital and the endless choice of cuisine.

Just as London’s districts can be demarcated by their architectural character and landscape, as you move between close neighbourhoods you’ll slowly see the style of each district’s inhabitants change in tandem. So, it’s far from surprising in London to see the pinstriped tailoring of the financial district abruptly shift to creativity-championing outfits in nearby East London or to see West London’s firmly old money look swiftly replaced by Notting Hill’s bohemian spirit.

Below, we’ve worked with premium British retailer Reiss and distilled the sartorial spirit of the city’s most stylish neighbourhoods and picked out the key pieces from the brand’s AW19 collection, designed here in the capital. No self-respecting resident of each locale would be seen without them. From edgy east London hipsters and their love of eye-catching style to the razor-sharp tailoring of the City, here are London’s landmark looks. 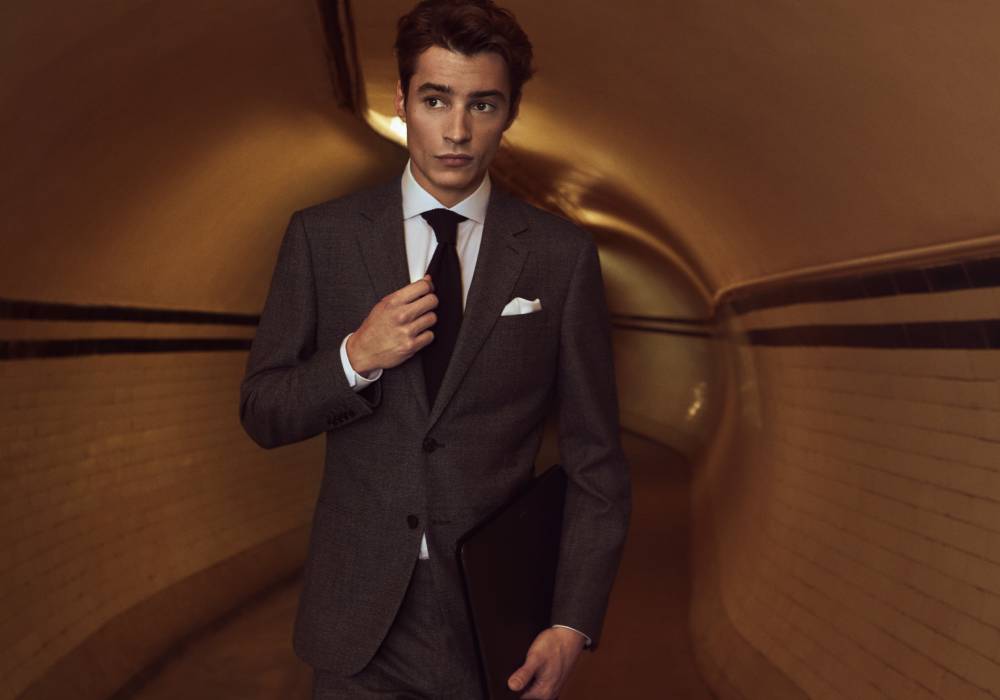 The City of London

The city of London is known as the beating financial heart of the capital, where money talks and life isn’t just fast-paced, it’s at constant break-neck speed. So, when life is as non-stop as that of the city boys, ease of style and something that communicates impeccable taste come right at the top of the list of requirements.

It’s unsuprising then that for the bleary-eyed banker, a finely tailored suit offers the most ease of wear: and when cut just so by some of the city’s finest tailors, waking up and instantly looking the business couldn’t be easier. The city of London banker values tradition above all else, so forget your suit worn with sneakers, and think double-breasted jackets, Windsor knot ties and shoes so vigorously polished their surface is almost mirror-like.

With the likes or infamously formal Goldman Sach’s dropping their compulsory tie policy though, the city boy look has loosened up a little, meaning this sharply-cut suited look can move from trading floor to trendy bar will more ease than ever. To complete the look, all you’ll need to provide is the trademark assured swagger. Britain can proudly lay claim to being at the forefront of the emergence of punk rock, and while the music movement may have peaked way back in the ‘70s, the subcultural spirit lives on in London’s Camden. This north London hotspot is best known for its market-lined streets filled with more leather, neon and studs and zips than you previously thought possible to inhabit one place.

The rocker look of north London is unsurprisingly firmly in the realm of the casual and you’ll be hard pressed to spot a suit among the leather jacketed throngs of residents who take their music loud and their lifestyle with an edge.

Unsurprisingly, the Camden rock set live predominantly in the colour black and if it feels even slightly conventional or conversative then you’ll be hard pushed to spot it in Camden. To riff of the look choose leather jackets with metallic hardwear, drainpipe black jeans and boots that look like they could easily survive years of wear in the neighbourhood’s many infamously rough and ready dive bars. For London residents, the east of the city has long been the de facto epicentre of creativity, a place filled with arthouse nightlife, designers of all persuasions and curiously ever-more artisan coffee shops and cafes. The unofficial dress code is vaguely prescribed to be ‘self-expression’ and this is perhaps most concentrated in E1’s Hackney.

For Hackney’s young creatives, a look that feels individual, off-kilter and certainly never ordinary is order of the day. Disregarding the strictures of work/play separation, the Hackney look doesn’t discriminate between work and play, with each edgy look being appropriate to wear in both the co-working space or the latest pop-up food market.

But, while style errs on the casual side, the provenance of each carefully-considered look is anything but. The streetwear on show in Hackney may appear to have been thrown together on a whim, but you can bet with some certainty that every other ensemble is an enviably hard-to-get your hands on mash up of the hypest brands known to man. Brought to worldwide attention by a certain fictional bumbling Englishman and one of the world’s best-loved carnivals, Notting Hill is a by-word for style that mixes eccentricity with old-word charm. Unlike the faster-paced parts of the city, this West London enclave is known for its vintage-filled markets, bohemian bookshops and a tranquil pace of life that feels quintessentially English.

While style in Notting Hill does indeed feel eclectic, there are certain signature pieces that confirm that you are indeed in W1. Tailoring is key, but it isn’t worn as a sharp city uniform, but rather as looser separates lean into the smart/casual divide. Trend too is shunned in favour of tradition, so houndstooth, herringbone, corduroy and all manner of traditional textural fabrics reign supreme in this well-heeled postcode.

To get yourself some of the languid sartorial charm of Notting Hill, look for outfits that look smart without trying too hard. Mixing and matching is key (as devotees of the nearby Portobello Road vintage market will attest to) so deviate away from anything that feels too matchy-matchy or brash and play with contrasting textures and colours to channel the spirit of Hugh Grant’s bookish gentleman.