There's no faulting this star's style
By Richard Jones

It’s hard to get a read on Ansel Elgort. The actor first came to our attention while breaking teenage hearts with a role in A Fault In Our Stars, before a mini-reinvention as a super slick getaway driver in one of the most stylish films of 2017, Baby Driver. Since then, he’s also developed a sideline as an EDM-playing, air-punching DJ under the name Ansølo (not to be confused with any members of the Star Wars franchise), then hitting the junket circuit to refer to himself as “the most threatening guy ever”, whatever that means.

So while Elgort flits between cutesy teen heart-throb and hubristic Hollywood have-it-all, one thing we are able to get a read on like a Walt Disney book in size 16 font is the 24-year-old’s undoubted knack for dressing himself with a rare finesse for someone of his age.

It’s hard to ignore the fact that most Hollywood young guns all have stylists now, but there is a flair to Elgort’s look that can’t all have been handpicked for him. His tailoring choices are classy and timeless, yet he isn’t afraid to play around with cuts and colours while mixing up traditional styles.

More casual looks will see sporty jackets come into the mix, but far from playing ball with the baggy streetwear crowd, Elgort keeps his silhouette slim, tapered and undeniably well put together.

There are so many shades of blue that you’d be a fool to stick with bog-standard navy. Make like Elgort and explore different hues, like this tidy teal number. The vibrant tone works well with more neutral brown (most blues do), and everywhere else he makes sure his style is on point – doing the top button of his suit up and getting all matchy-matchy with the jumper and shoes. 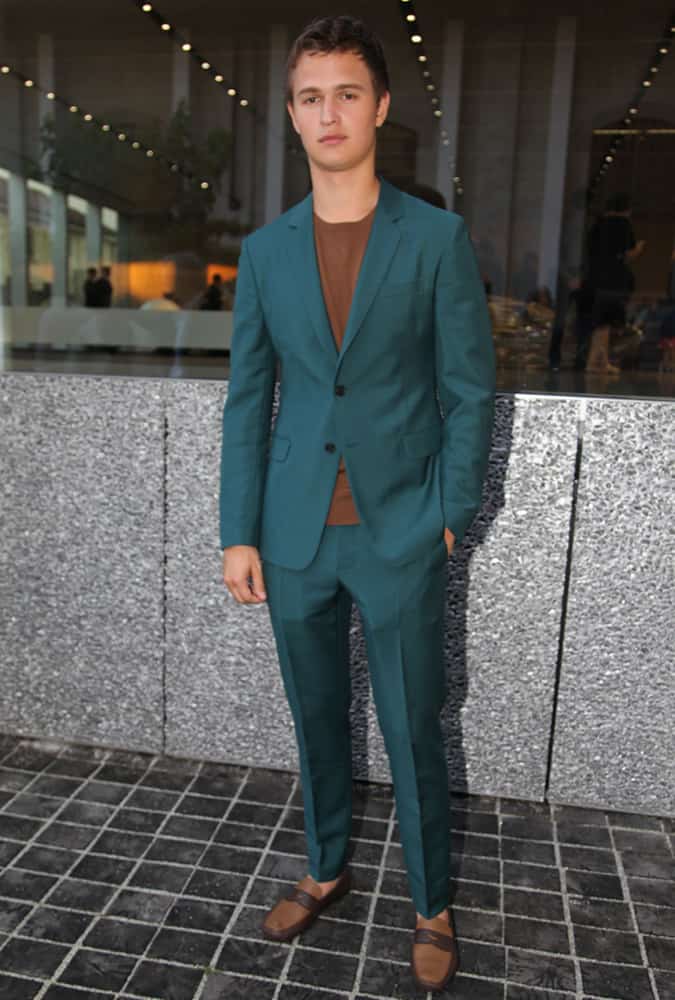 The pinstripe suit was long overdue a shake-up from its cringe-inducing links with 1980s Gordon Gecko types. Elgort’s modernised take here replaces the traditional boxy fit with a slim double-breasted jacket and trousers with a minimal break at the hem. Rather than let the suit take centre stage, he’s gone one further and slid a patterned shirt underneath in a tonal colour to tie it all together. A suede jacket isn’t the most practical piece in a man’s wardrobe, but we’ll be damned if it isn’t the most covetable. It’s a timeless luxury item, and we’re particularly fond of Elgort’s midnight blue version with gold detailing. Dark blue and yellow is a combination capable of making canary birds sing, while a pair of black jeans is always an excellent base to build a look on. Mr Elgort Will See You Now

Despite the numerous re-inventions of the suit, here’s proof that a classic style can still be used to devastating effect. Charcoal grey is more formal than lighter shades but not as stuffy as black, so is perfect as an ace up your sartorial sleeve when dressing to impress. Unless you’re just going to wear it for job interviews, opt for a medium weight wool cloth to give you the durability to repeatedly peacock in around the office. Elgort knows that any young style icon worth his salt needs to nail their sportier looks just as well as their tailoring. Here, a cropped jacket with racing stripes has the sporty side covered, while a smart, dark polo shirt, black jeans and Chelsea boots stops him from looking the part of the typical high school movie jock. The roll neck has been used as a tailoring game changer so much in recent years that we wonder whether it’s now just part of the game. Classic fine gauge knits like Elgort’s are the most formal and slip easily under a suit without distorting the jacket’s shape, which would make you appear bulky. Colour-wise, neutrals work best, so stock up on navy, black and grey for a failsafe selection to draw up your winter style battle plan. Though there will always be space in the male wardrobe for conventional colours, modern tailoring of recent seasons has strayed into a pigment blowout where no shade is off limits. Pair that with the revival of double-breasted cuts and wide lapels that was all over the latest fashion month like a rash and you have this look. Pastel perfection. Get the books out because you’re about to be schooled in how to do winter preppiness. A classic shirt under a simple knit is a good base, followed by a scarf to fly behind you as you rush between Ivy League lectures – and of course, brogued footwear is a must. When the chill bites, a grey herringbone overcoat is the ideal top layer and also helpfully works some texture into the overall look. The long-sleeved Henley top is a solid option when looking for an alternative to casual crew neck tees and oft-used button-down Oxford shirts. For an additional switch, opt for grey instead of white for a flattering shade that, as is the case here, works expertly with dark raw denim and black Chelsea boots. There was a time when the sight of a short-sleeve shirt was usually accompanied by the click-click of a tourist’s camera, but now even homebodies are getting in on the style. Oftentimes the shirt says enough by itself without the need for something to scream down below so simply pair yours with some chinos or Elgort’s favoured black jeans and boots combination instead. Elgort’s red carpet posing might be as awkward as Dwayne Johnson forever fastening his cufflinks, but this outfit at least is an example we’d suggest you follow. The star of the show is the four-by-one double-breasted jacket, cut to a flattering silhouette and designed to wrap around and be buttoned at the bottom, subverting our notions of traditional tailoring and looking damn cool while doing so. NB he does however get points deducted for the jacket sleeves, which are slightly too long. Not that the already trim actor needs any help, but dark colours like black and weirdly-darker-than-black-but-not-actually-black midnight blue have a spot-on reputation for slimming their wearer down. A dinner jacket should technically have contrast silk details, but Elgort gets around this with the heightened formality of a shawl lapel while also keeping his flecks of flair to a minimum. The idea of a statement hoodie would have most running for the hills on any given Sunday, but this bulky, leather option isn’t your typical streetwear staple. Hanging on Elgort’s shoulders, it lends the Manhattan native the look of an urban astronaut, hit home by some rocket fuelled statement knitwear. Elsewhere, the chunky trainers might have been one statement piece too far if it wasn’t for the look’s overall muted colour palette, keeping things in check. It’s hard to tweak the standard black tie uniform and not come off try-hard. However, if there’s any piece worth contradicting that advice for it’s the velvet jacket. It’s time-honoured enough to stand the rigours of the dress code while injecting a smidgen of fun into the never-ending vortex of made-up penguin suits. Just the jacket, mind; the trousers and shirt should stick to their traditional bedrock for the top half to be its most potent. Jump In My Car

Standing next to the granddaddy of American muscle cars, the Ford Mustang, Elgort himself flexes some serious style in a preppy boating-style blazer. Once again sticking to his black jeans, up top Elgort opts for the air tie which keeps the look modern and refined, while he sports every man’s best friend on the shoe rack down below – the ever-versatile white sneaker. What To Wear On Valentine’s Day
9

How To Get Justin Bieber's Best Hairstyles
10