The Best Air Jordan Sneakers Of All Time

From OG models to Supreme collaborations
By Paddy Maddison

Here’s a strange-but-true fact about sneakerheads: they really know their Roman numerals. Why? Is there some unspoken pact by which they all adhere to a redundant numerical system? No. The real reason lies, somewhat less surprisingly, with a particular line of trainers. More specifically, the most important, influential and genre-defining line of sports footwear ever created – one that also happens to use numerals with each new release.

We’re talking, of course, about the lovechild of sportswear giant Nike and NBA superstar Michael Jordan: the Air Jordan brand. Since 1985, 33 Air Jordan models have acted as the vertebrae that form sneaker culture’s backbone.

Here’s every sneakerhead’s primer on the brand that started it all, and the best Jordan shoes ever made.

It’s hard to state the impact the Jordan brand has had on sportswear. A lot of the shoe’s success can be attributed to the fact they were created for a purpose. In the same vein as military clothing or diving watches, which served a function first and foremost, Air Jordans were, and are, created for performance on the basketball court.

Design came a close second place behind function though, and the early Jordans have a distinctive look, which today, screams nineties. There was always a luxurious element too – shoes were often made from suede and tumbled leather with robust rubber soles that appealed to casual wearers.

Many of the early designs are truly timeless. The Jordan III, for example, was first introduced in 1988, over 30 years ago, but it still looks decidedly modern today. Some have accused the Jordan brand of watering itself down over the years, and this is true to some extent. There are numerous, cheaper styles available that take inspiration from original Air Jordan models, but lack the performance, overall appeal and rarity. Jordan’s line of clothing essentially makes it a fashion brand, but all the shoes with ‘Air’ and numerals in the name are the ones to take note of.

Air Jordans have always been highly sought after and, thanks to carefully timed, limited run releases, they still are. Every year the brand will turn to its archives and re-release old models in new and ‘OG’ colour ways. The latter nearly always sell out, and values can soar when sneakers are re-sold on sites like eBay and StockX.

Take the Jordan IV Retro ‘White Cement’ released in 2016 at £165. Today, the lowest asking price on StockX is £265. Collaborations are often more extreme. The recently released Jordan I Retro ‘Travis Scott’ retailed at £165 and sold out immediately. At the time of writing you can pick up a pair for no less than £617 on StockX.

So, if you want to make some easy money, queue up and then re-sell online.

A Brief History Of Air Jordans

The Air Jordan franchise is the fertile soil in which the roots of the sneakerhead movement took hold. This was the birthplace of collector culture and the shoe that cemented the place of the ‘pro model’ trainer in sportswear. Today, the Jordan ‘Jumpman’ logo is every bit as iconic as Nike’s Swoosh or Adidas’ Trefoil. Logic would dictate that the brand’s story began with Michael Jordan’s first pro model: 1985’s Air Jordan I. However, it was actually a different shoe that paved the way for the hype, the Nike Air Ship, a mysterious precursor to the first official Jordan sneaker and one for which myths and legends abound.

The story goes that, in the mid 1980s, Michael Jordan was being fined $5,000 per game for wearing a certain pair of black and red basketball shoes. These unconventionally coloured kicks broke the NBA’s ‘uniform of uniformity’ rule and so then-commissioner David Stern “threw them out of the game”. Legend has it that MJ continued to wear the sneakers anyway, with Nike picking up the bill.

It’s often mistakenly understood that this shoe was the black and red – or ‘bred’, as they’re known by collectors – Air Jordan I. In fact, it was the Air Ship. Still, the error certainly didn’t harm Nike’s sales. The Air Jordan I was a runaway success and the first sneaker in a 33-year chain of annual releases – each one just as sought-after as the last.

Buzz around sneaker releases is nothing new these days, but before Air Jordan came along, it was. This is a brand that didn’t fuel the hype so much as actively create it. As a result, Jordans were and are some of the most coveted sneakers on the face of the Earth – something which has, in the past, led to problems. And we’re not just talking about the long queues on drop day.

At times, Jordans have been known to whip up kick-hungry crooks into such a frenzy that people have lost their lives over pairs. A 2015 documentary estimated that over 1,000 people die every year as a result of fatal muggings for sneakers, and Air Jordan has been repeatedly pointed to, by news media, law enforcement and NBA stars alike, as the brand at the centre of the madness.

The Best Jordans Of All Time

Released in 1995, the XI carried Michael Jordan through one of his most memorable sporting years. It was on his feet when he won MVP, All-Star MVP and Finals MVP. It even made an appearance in basketball blockbuster Space Jam – something that didn’t exactly harm sales.

The sneaker featured a sleek, aerodynamic design, backed up by hits of patent leather. It was sporty and modern, but also classy and elegant. An instant favourite among players and sneaker enthusiasts alike, the XI remains one of the most popular Air Jordan models and a sporting stalwart through and through.

The release of the IV marked a pivotal point in the history of Air Jordan. This was the brand’s first global-market release, sowing the seeds for a future as one of the most recognised and respected sports label’s on the planet. It was also the second Air Jordan sneaker to be designed by designer, architect and Nike legend Tinker Hatfield, further solidifying the unique look that would become emblematic of the franchise.

Sports fans, however, will remember it for a different reason. This is the shoe in which Michael Jordan made “The Shot”: an epic, buzzer-beating, series-winning basket hit in the last three seconds against the Cavaliers in 1989. The stuff of sporting legend and another important step on the road to greatness for both MJ and his sneakers. It’s hard to believe now, but legend has it that when Michael Jordan set eyes on his first pro model, he wasn’t a fan. “I’m not wearing that shoe. I’ll look like a clown,” he’s rumoured to have said.

With time, the shoe slowly grew on him, and everyone else. Today, the Air Jordan 1 is nothing short of a design icon. The precursor to the most lauded line of sports shoes ever produced, its NBA-banned colours and simple styling remain favourite talking points among both sneakerheads and design enthusiasts alike. 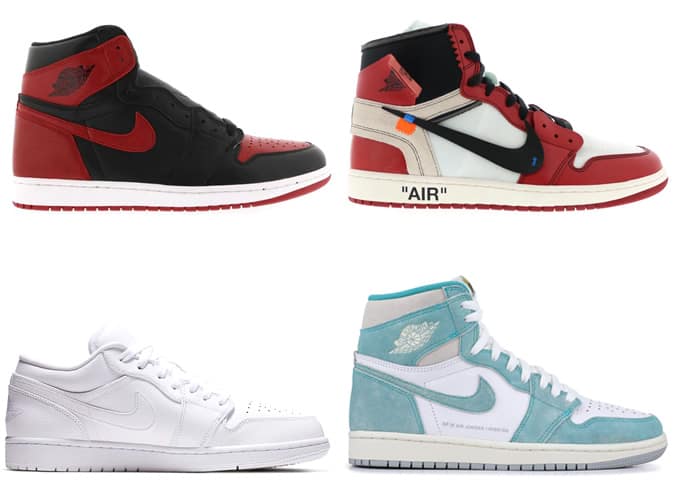 It’s a little-known fact that the Air Jordan III was originally designed with a Swoosh to the side. This was the first model for which Nike enlisted the help of Tinker Hatfield – a man who would go on to create more than two-dozen shoes for the franchise. He had other ideas, and elected to take the logo off.

“I realised very early on that it would really piss off all the people at Nike, which I loved doing, to be honest,” Hatfield said in an interview with Sole Collector. “That usually means that I’m doing something different, so I really wanted to shake people up.” Originally released in 1990, the Air Jordan V was something of a trendsetter in terms of nineties sneaker design. Tinker Hatfield (him again) took inspiration from the shark-tooth nose art often found on World War II American fighter jets. He used similar shapes to decorate the midsole, in reference to Jordan’s “biting style” on the basketball court.

In more recent years, the V has enjoyed unprecedented levels of hype, thanks in no small part to a makeover by transcendent skate wear label Supreme in 2015. This made it the first ever Air Jordan shoe to receive the Supreme treatment and cemented its place as both a both a sporting classic and a streetwear staple. As Michael Jordan took steps towards becoming a global sporting icon, the Air Jordan VII kept him surefooted along the way. As well as winning the 1992 NBA championship (and Finals MVP for the second year running), MJ also led the USA to a gold medal at the Olympics in Barcelona.

In design terms, the VII marked another important milestone in the Air Jordan’s journey to becoming the force it is today. For the first time, Hatfield felt the franchise was strong enough in its own right to lose the Nike branding entirely. In order to achieve this, he did away with any exterior Nike logos and the visible Air window to the sole. This was the first time Air Jordan was marketed separately from Nike and Nike Basketball, helping to distinguish it as a separate entity. Even by his standards, 1993 was a crazy year for Michael Jordan. He became the first player in basketball history to clinch Finals MVP for three consecutive seasons and led the Chicago Bulls to a third straight title. With achievements like that it’d be difficult to remain grounded, so it’s a good thing he had his Air Jordan VIIIs to strap himself into.

The eighth Jordan pro model whipped sneakerheads up into a frenzy almost immediately. The strappy design was out of this world and unlike anything else around at the time. Meanwhile, the colourways were spattered with more nineties neon vibrancy than the inside of Mr Motivator’s wardrobe. Today it remains a collectors’ favourite and one of the defining shoes of the decade. How Can You Tell If Your Clothes Are Good Quality?
2

The Health Benefits Of Green Tea
3