From Devon to the South Pacific, this is your new bucket (and spade) list
By Rebecca May

Get your manscaping finished because these are the ultimate beaches to spend your hard earned holiday time on. From the most beautiful beach in Hawaii, to the paradise of Tahiti and even the British seaside for a UK getaway, these are the best beaches we could find, anywhere in the world.

You’ll never be so happy to have sand in every crevice.

This beach is famed for its big-wave surfing during the winter season, and when the waves go flat in summer, it makes for an ideal snorkelling spot. Most excitingly, the clue’s in the name: this beach on Hawaii’s laidback North Shore offers the most gorgeous sunset on an island of knockout viewpoints.

Stay at the nearby Turtle Bay Resort for the ideal, luxury base to explore the North Shore from. The hotel will also score bonus points with pop culture fans – epic 2000s mystery drama Lost was filmed on the resort, with the unique banyan trees on the property making several appearances throughout the series. Pack your most colourful Hawaiian shirt.

By night, the high-end restaurants and glam nightclubs of Mykonos are the places to be seen on this lively Greek island, but by day, head to the small, secluded Psarou beach. It’s surrounded by mountains, which means the crystal clear water is always calm: perfect for taking a dip, and for enjoying the water sports on offer.

When you’re ready for a lazy lunch, this A-lister hotspot is lined with the most high-end of beachside restaurants, but be sure to book ahead to get a reservation. If you’re so inclined, there’s also plenty of space to dock your yacht. There is no shortage of luxurious white sand and turquoise blue sea in the idyllic holiday destination of Tahiti’s Bora Bora. But while most of the island’s sandy stretches are privately owned by high-end resorts such as the luxe lagoon-set St Regis Bora Bora Resort, there is one public beach which offers the Instagram-gold to rival the five-star hotels: Matira beach.

Powdery white sand stretches for a mile along the south of the island, and the warm, shallow water is so blue it looks Photoshopped. With waterfront restaurants, bars to stroll to and tropical snorkelling to splash around with, it’s the perfect beach to spend a day at lounging under the coconut palms. No filter required. Swim shorts most definitely are. So-called because of the fizz in the water that appears at low tide which is caused by gas escaping from volcanic rocks, Champagne Beach on the Vanuatu island of Espiritu Santo is renowned as one of the most beautiful beaches in the South Pacific, and it’s clear to see why.

Not only does this natural beach offer year-round warm water, stunning blue sea and white sand, but you’re also likely to share the beautiful beach with turtles who frequent the bay and local cows, who roam freely near the beach. We can’t say we blame them. No, this isn’t the Amalfi Coast: it’s unassuming Devon – one of the best seaside destinations in the UK. This award-winning beach is part of the designated South Devon Area of Outstanding Natural Beauty, and is a haven for surfers both experienced and beginner.

Don’t forget your bucket and spade: as well as offering sandy stretches to relax on, for the perfect family day out, the rock pools which litter the beach are just crying out to be explored. 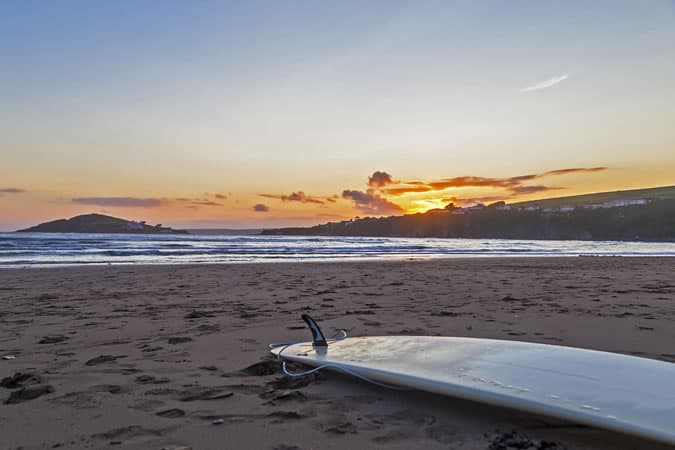 Even though it’s not actually four miles long, but rather, four kilometres, this is the perfect landing spot for your beach break to then go snorkelling around the Great Barrier Reef. The beach itself is beautiful, lined by picturesque palm trees, and offers a prime location for wind surfing, too.

The location is the real gem here: take one of the many local boat tours from Port Douglas to the Great Barrier Reef to see the planet’s largest reef system, with more than a thousand species of spectacular fish. It may not be what comes to mind when you think “beach paradise”, but the black sands of Reynisfjara on the south coast of Iceland have to be seen to be believed. Created from lava flowing into the ocean which has then cooled, this is perhaps the coolest-looking beach in the world. Its Icelandic locale, rugged stones and roaring waves mean it isn’t a sunbathing hotspot, but it is certainly beautiful.

The beach is situated right by the small fishing village of Vík í Mýrdal. Spend a night in one of the charming hotels and stop by the quaint local restaurants for fresher-than-fresh fish. Don’t miss the local specialty, grilled Arctic Char. Many beaches claim to be the best in the world – and when you’re sunbathing lazily with nothing but the sound of waves gently washing up on the shore, you’d be hard pressed not to think it the greatest place on earth. But this secluded Brazilian beach can make the claim officially, thanks to taking the first place spot in 2019 in the TripAdvisor Travellers’ Choice Awards for beaches.

Baia do Sancho is part of Parque Nacional Marinho de Fernando de Noronha National Park, and as such means you pay an entrance fee, and also means that it hits the perfect sweet spot of sandy beaches surrounded by nature. It’s also quite a challenge to get to (a flight to an island off mainland Brazil, for one) so is often empty. The Most Stylish Travel Destinations Of 2020
9

Manscaping: The Right Way To Groom All Your Body Hair
10

The Best Smartwatches To Buy In 2020