Forget going under the radar, this is your next statement piece
By Tayler Willson

Camo print has become something of a staple in menswear over the years. It’s a pattern that has come out of hiding, figuratively and literally, from its military origins to its infiltration of the streetwear scene. Originally designed to go unnoticed, wearing camouflage today is all about standing out.

The print itself is thought to have been designed by French painter Lucien-Victor Guirand de Scevola at the beginning of the First World War to help disguise the French military during combat. It caught on quickly, and soon after, both the British and US military replicated the design, putting their own spins on it.

Now over 100 years later, despite its intentions to help its wearers blend in, its purpose in fashion is for anything but. As a statement, camo is no longer solely a military reference, either – it brings to mind subcultures as diverse as skinheads, Pitti peacocks and hip hop, as well as the wider streetwear community and the high fashion world.

In fact, everyone from The Notorious B.I.G. to Pharrell and Kanye West made the print their signature at one stage or another, and established houses such as Louis Vuitton, Prada and Burberry have made use of it in various collections.

But how to wear it best? We’ve picked out some of our favourite camouflage jackets that are available to buy now, with a little advice on how and where to wear them too.

One of the greatest things about a camouflage jacket is its unique ability to bring to life almost any outfit in need of personality. Whether you’re looking to inject some life into a pleated trouser and tee combo, or to add a little colour to a smarter outfit, the camo jacket has you covered.

Japanese streetwear brands like BAPE and WTAPS famously adopted camo print in their jacket designs, mostly thanks to its aforementioned versatility. It also created a signature for them – BAPE in particular is instantly recognisable thanks to its unique camo design. You needn’t drop hundreds on a limited run jacket though, there are plenty of high street camo jacket bargains that can be deployed in a streetwear-inspired look.

Few other patterns can so easily alter an entire outfit. Whether paired with some artfully faded denim jeans, some loose-fitting joggers or even some block coloured shorts, the camo jacket’s versatile nature allows it to blend in to a variety of looks with ease.

When you think of camo, smart attire won’t be the first thing that comes to mind. Camouflage has always had somewhat off-beat, counter-cultural connotations, but that doesn’t mean it can’t be adapted. While it’s never going to fit into a black tie event, the right camo jacket can often be a great way to finish off a smart casual rig – but in a more individual, stylistic way.

As long as you don’t have any other prints going on (a striped or patterned shirt, for example) a camo jacket might just be the way to ensure you stand out from the crowd. Bonus tip: when aiming for a smarter take, go for a more subdued pattern and colourway – think tonal, muted shades of deep green, black or grey which reference military looks but in a more contemporary, wearable way.

While it depends on the designer, men’s work jackets tend to share some connotations with the camouflage print. Both are seen as raw and rugged, but both are also thought of as durable, hard wearing pieces that’ll stand the test of time.

Worn with a pair of roughed-up denim jeans and a pair of chunky-soled, waterproof boots and you’ll find the camo workwear jacket is in its absolute element. This is perhaps the easiest way to wear camo and, in chore jacket form, is the ideal layering piece to pair in-between a T-shirt and heavier overcoat. Perfect for those who are vertically challenged, TOPMAN’s camouflaged parka features a shorter length than usual, so it won’t dwarf the wearer. It’s ideal for breezy spring weather, with a quilted lining for both comfort and warmth and a zip fastening that allows you to adapt as the temperature changes. This parka will look mint either fastened or undone paired with a plain white tee and a dark pair of trousers. Ideal for battle in the colder months of the year, Criminal Damage’s padded camo jacket might boast the versatility you’re looking for. With warmth assured thanks to its padded fabric and the classic parka hood, plus a little more length than most, this classic style has got your six when inclement weather is out to ambush you. 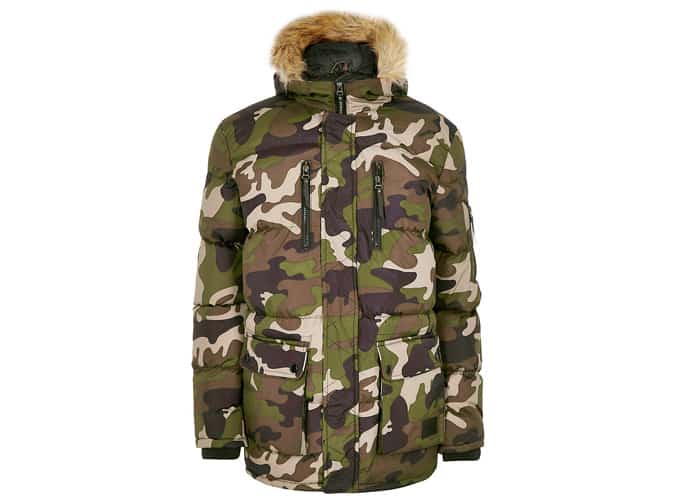 Superdry has a long-standing reputation for making durable, comfy parkas, and this military edition is no different. With half a fleece lining and adjustable popper cuffs that ensure the heat is kept in, this military jacket would work as well in a snowstorm as it would popping round your nan’s for some midweek snacks. Canada Goose makes big, expensive coats, everyone knows that, but they’re costly for a reason. They’re incredibly well made using high-grade nylon, unbreakable hardware and real down feather insulation. This Bromley bomber jacket is no exception. Whether skiing Val Thorens with the wind in your hair or trudging through town on a Sunday morning, the brand’s remained focus on functionality and versatility means it’ll do the job perfectly. Coming in a subdued grey-green mix, Zara’s camo bomber is for the simple-but-purposeful dresser. With a stand-up buttoned collar, front pockets and zip-up fastening, this Zara classic would work as well with a block colour underneath as it would zipped up with a plain Oxford shirt peeking out of the brim. A bomber for the more formal occasion, River Island’s almost gold and black bomber would be perfect for date night. Styled with a dark turtleneck base layer for suaveness, or just a simple T-shirt or a merino knit jumper, the bomber is an extremely adaptable item of clothing will see it fit most occasions. Barbour has been designing excellent menswear for 125 years, and the brand’s camo print overshirt lives up to its great heritage. Featuring a load of outer pockets (as well as a button-down chest pocket for the more valuable items) this would make the ideal middle layer for brisk temperatures, as well as an excellent outer-layer for when it’s a little warmer. Featuring the lesser-seen black and grey camo, this All Saints shirt is an alternative to more traditional prints. Its combination of both zip and button fastening means you can opt for either the undone cape look or the zipped-up, tidier appearance, while its lightweight fabric means it would work as both a middle or an outer layer too.

With a more modern, graphic camo print, this jacket from Nudie is cut from organic cotton-canvas, such are the brand’s eco-friendly production methods. Featuring oversized open pockets and a more boxy look than others, this would be an excellent choice for the more forward-thinking camo wearer that’s going for something slightly alternative. Male Pattern Baldness: Everything You Need To Know
9

The All White Outfit Guide For Men
10

The Best Vintage Watches And Where To Buy Them