The Best Chore Coats You Can Buy In 2020

This trans-seasonal workwear staple should be in every man's outerwear rotation
Image: H&M
By Paddy Maddison

If you’d told a weather-beaten, American scaffolder from the 1920s that in 100 years time he’d be a style icon to men of the future, he’d probably have spat his chewing tobacco out at you in disbelief. Yet here we are, writing about his coat.

The chore coat (also referred to as a chore jacket) perfectly encapsulates everything that makes workwear great: it’s functional, comfortable and rugged. Plus, like denim jeans or the best men’s boots, the people who designed it weren’t concerned about whether it became the next runway phenomenon or not, so you’ll still be able to pull it out of the wardrobe in 20 years without cringing so hard you give yourself a hernia.

As a heritage workwear staple, this utilitarian classic ticks all the boxes. But what makes it different from any old grease-stained coat hanging up in the workshop?

What Is A Chore Coat?

If its name hadn’t already given the game away, the chore jacket was designed to be worn while carrying out, well, chores.

A thick construction and large patch pockets made it a firm favourite among labourers, mechanics, farmers and basically anyone whose job meant their clothes needed to withstand a hammering – no doubt literally, in some cases.

“For functionality purposes, the chore coat usually comes with two large front pockets located at the bottom of the jacket and also two large breast pockets,” explains Rudy Budhdeo, owner of renowned London workwear and denim shop Son Of A Stag. “It normally had a large collar that could be flipped up to protect the wearer from the elements.”

Traditionally, chore jackets were deliberately oversized to allow for freedom of movement and also for alterations to be made. However, these days they tend to be made more fitted, as the manufacturers are well aware that men are more likely to be using them to nip to Starbucks for a triple, venti, soy, no foam latte than for doing sheet metal work in the pouring rain.

The History Of The Chore Coat

The chore coat’s legacy stretches back well over a century, to a time when Starbucks weren’t even a thing. But as difficult as that may be to picture, it’s what made the chore jacket the functional favourite it is today.

1917 marked the first print advertisement for what American workwear label Carhartt then referred to as the ‘Engineer Sack Coat’. Admittedly, the name’s not quite as snappy, but it did boast a lot of the same features as today’s chore coats, paving the way for future greatness. Think patch pockets, a classic collar and a construction that early ads aptly described as having ‘substantial weight’. Carhartt’s ‘Engineer Sack Coat’, from a catalogue circa 1925

“The preferred fabrics for construction were either denim or heavy duck canvas so that they would be more durable but also protect the wearer from the elements,” says Budhdeo.

This sturdy build made the coats a hit with workers and as the years progressed, features such as blanket linings and bi-swing shoulders for added manoeuvrability began to make appearances.

It wasn’t long before the general public got wise to the fact that this style of outerwear worked nicely as a casual top layer, thanks to its comfort construction, versatility and timeless looks. Designers then got hold of the silhouette and we began to see slimmer fits, a reduction in the number of pockets, smaller collars and all other sorts of fluctuating details.

Yet no matter how many changes, the chore jacket’s foundation remains the same.

How To Style A Chore Jacket

Adding a dash of heritage and personality to your outfit needn’t be a chore when you’ve got one of these at your disposal. For some expert tips on how to make your jacket work for you, we spoke to personal stylist Daniel Johnson to glean his pearls of workwear wisdom.

Unless you’re a real fashion free spirit, chances are you wouldn’t pair a blazer with a pair of carpenter jeans, so wearing your chore jacket as part of a smart casual ensemble may seem a little counterintuitive. But it can be done, and done right, it looks great.

Just imagine your chore jacket as an unstructured blazer and that will give you a pretty solid starting point to build your look around.

“Flannel trousers and white sneakers would work great here,” says Johnson. “I’d avoid jeans to keep some level of formality and just keep it simple with a crew neck jumper and a T-shirt underneath. A nice mix of formal and casual.” It may have been built with practical applications in mind, but the style makes for a top-notch casual jacket. The chore coat was made to be worn with jeans and when you pop one on with a pair you can tell. To take things to the next level style-wise, Johnson suggests experimenting with texture such as twill, denim or wool.

“Always use a texture in the coat rather than something flat, otherwise the look can just blend into the background,” he says. “I’d style this with jeans or twill chinos and sneakers.” Simple. The Best Chore Jackets You Can Buy Right Now

You can’t talk about workwear without mentioning Carhartt. The US brand is one of the oldest names in the game and has built a reputation for itself as one of the premier purveyors of rugged, utilitarian garments.

The chore coat has one of the longest legacies of any of Carhartt’s products and through its streetwear-infused Work In Progress (WIP) line, the brand has brought it fully up to date without sacrificing any of its authentic charms. Levi’s has been kitting men – working and otherwise – out with durable denim for well over 150 years, which is a pretty exemplary run by anyone’s standards. But it’s not just jeans that the American heritage brand crafts to perfection, its chore jackets aren’t half bad either.

Boasting the same rugged build quality that its denim has become famous for, a chore coat from Levi’s makes for a welcome addition to the wardrobe of any self-respecting workwear addict. Cult UK label Albam has been bubbling away under the surface since 2006. Working with the UK’s best craftsmen and factories, the London-born brand produces some of the slickest, stripped-back and functional clothes around.

This breezy, cool jacket in ecru is crafted from 100 per cent cotton, making it perfect as a stylish, transitional layer. Spanish high-street chain Mango may be named after a fruit, but its uncluttered, timeless menswear collection doesn’t feature any bad apples. Free from slogans and obnoxious branding, Mango Man’s refined offerings are some of the most simple and stylish to be found.

In an airy linen blend, this earthy worker jacket may not be much good for laying railroad sleepers in torrential rain, but it will certainly look the business with a pair of chino shorts and some canvas trainers. A fetishisation of work clobber in Japanese menswear is certainly nothing new, but it’s something that laid-back Nippon brand orSlow has managed to build an identity around. Set up by a compulsive clothes hoarder with a taste for vintage, orSlow’s clothing takes its cues from the military, industry and all things Americana.

This pink version might would probably not have worked for yesterday’s workshops, but for turning heads on the street, it’s a real grafter. While it’s definitely not a workwear brand by any stretch of the imagination, what Jean Touitou’s Parisian label does do incredibly well is simplicity and refinement. A.P.C. is great at putting its own signature twist on the classics and its chore jackets are no different.

This denim number is a contemporary take on a workaday classic, with worn Japanese denim, in-seam pockets and unpicked stitch detailing. Since its humble beginnings in 1922, Dickies has prided itself on the build quality and toughness of its products – kitting out workers all around the globe with sturdy gear that can stand up to a thrashing.

Woven from a heavy-duty cotton canvas, the Brookview Jacket is a true workwear classic and modern menswear essential all rolled into one. After spending 10 years at Paul Smith and a further five at Maharishi, David Keyte made the decision to start his own clothing line. Inspired by the idea of creating well-made, easy-to-wear clothes for men and eschewing trends in favour of timeless style, he set up Universal Works.

The chore jacket – or Baker’s Jacket as UW calls it – has long been one of the label’s signature pieces. In an orange, Scottish wax cotton, this vibrant option is a subtle nod to road worker styles, fortunately without the glow-in-the-dark patches. 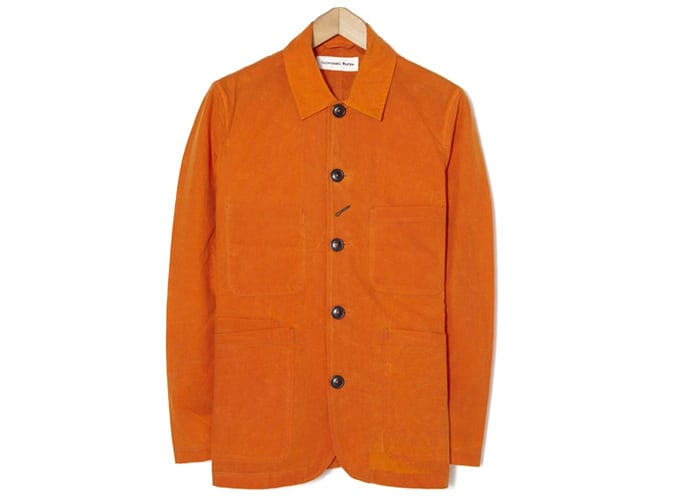 Originally established to cater for prospectors passing through the northwestern states during the Klondike Gold Rush, Filson has been churning out some of the finest outdoor gear around since 1897.

With a grand total of nine pockets and woven from naturally water-repellent virgin wool, the Mackinaw Cruiser jacket from this heritage US label is the ultimate in durable style. If you’re recruiting up-to-the-minute styles at price points that won’t leave you eating instant noodles for the remainder of the month, then independent e-tailer The Idle Man should be your first port of call. With an ever-changing range, spanning everything from trend-led, seasonal pieces to bona fide wardrobe essentials, this online retail mecca is the perfect place to get yourself equipped.

Look out for its signature chore jackets with classic detailing at a fraction of the price of the competition. If you like making extravagant purchases but aren’t a fan of the guilt that goes with them then Apolis might be right up your street. The American brand prides itself on going above and beyond to meet the highest possible standards in terms of social and environmental responsibility, working with traders and suppliers to ensure everything they use is fairly sourced and of the highest quality.

It just so happens they make some pretty nice chore coats too. In fact, they’re one of the brand’s key items. Woven in California from Italian cotton wool and then overdyed with indigo, Apolis’ chore jackets will behave like a pair of raw denim jeans, moulding to the wearer and fading at points of wear for the ultimate lived-in look. How To Dress Well: The 15 Rules All Men Should Learn
6

HIIT Workouts To Burn Fat And Boost Your Fitness