The term ‘classic’ is bandied around like a fashionable hot potato when it comes to describing most pieces inside men’s wardrobes. But few were so perfect the first time around that they haven’t been refined over time.

The peacoat, however, is one piece to which such words can truly be applied. From deck to dock, this compact casual winter coat has seen it all.

First worn by sailors during the 1800s, the cropped, double-breasted style, also known as a ‘reefer jacket’ or ‘officer’s coat’, is anchored in naval heritage, but came ashore in the decades that followed and stayed here.

Worn by everyone from James Dean to Robert Redford to Daniel Craig’s Bond, the peacoat has firmly shaken off the salty sea-dog vibes and is an ideal choice for winter walks or post-work pints.

Traditionally rendered in navy-coloured Melton wool, it’s warm, easy to style and endlessly versatile thanks to its neat, tapered silhouette that leaves just enough room for a solid piece of knitwear to slot underneath.

If you want to survive the colder months in style, finding your perfect peacoat is, um, quay.

The Peacoat: Centuries Of Style

Like so much of the best outerwear for men, the peacoat is a decorated military veteran. “It was invented by the Camplin family to supply the British Royal Navy,” says designer Julian Fuller, former head of menswear design at Debenhams. “It was originally the uniform of the petty officer, but following World War II, surplus jackets found their way into the average man’s wardrobe. The style was embraced thanks to its timeless styling and practicality.”

There is an ongoing debate among menswear buffs about the exact origins of the name. While some say it’s an abbreviation of ‘petty officers coat’, others believe it derives from the Dutch word ‘pijjekker‘, which describes a naval jacket that dates back to the 16th century.

To complicate things further, the word ‘Reefer’ came into use after the American Navy also began using the style. The term referred to the sailors who would climb a ship’s rigging, protected from the elements by their trusty coat. Whatever alias it goes by, it’s essentially the same good-looking garment. 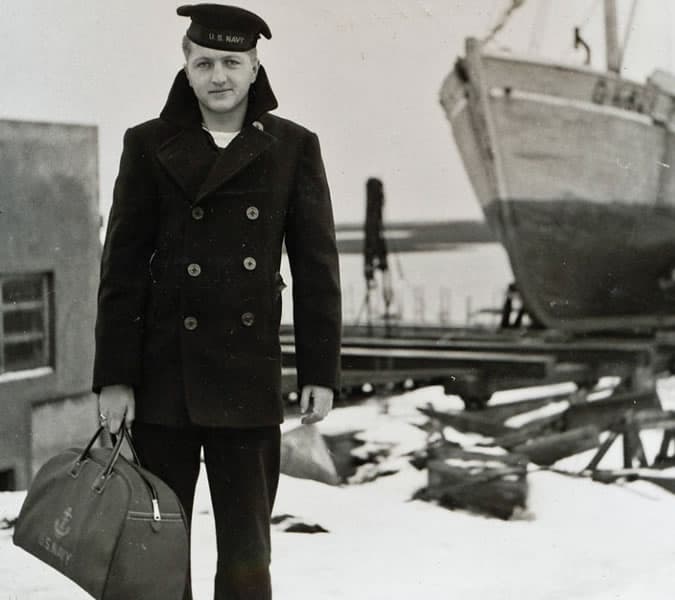 Though the overall construction of the peacoat remains unaltered to this day, a handful of its original finishing touches are steered away from in today’s civilian designs. The buttons, for example, once comprised of six-to-eight brass fastenings, are now more commonly made from rigid plastic or horn. “The term ‘top brass’ [which refers to someone in a high position] comes from the brass-buttoned reefer jacket, as it was worn only by officers above decks and not by seamen below decks,” says Clare Baumfield, a designer at outerwear specialists Gloverall.

Other details commonly found on the original peacoat considered overboard in the modern day include a rope-like ‘cordage’ connecting the top two buttons, which are more likely to earn seamen and poop-deck jokes than style points in the pub.

The most common style of peacoat features a cropped, double-breasted cut that flairs slightly at the hips. This gives the wearer room to move, whether that’s climbing some rigging or just manoeuvring your way to the bar. The large collar is designed to keep the wind off your neck and usually features a notch lapel, but occasionally you’ll see a shawl version that gives a looser shape around the shoulders. Originally designed for officers stationed on the bridge of a ship, the key difference here is length. The large collar and double-breasted cut remain intact, but the coat reaches thigh- or even knee-length, crossing over slightly with an overcoat. This is also one of the few versions where brass buttons are sometimes still used, lending it to more dressed-up looks. Although the classic peacoat comes double-breasted, there are examples (both current and historical) without the overlapping flaps and just a single row of buttons. This style is slightly more casual, sharing elements with some styles of worker jacket. How To Wear A Peacoat

The nautical theme is a good starting point for styling this coat. “A peacoat paired with a Breton jumper – the traditional blue and white striped French sailor’s sweater – and jeans or chinos is a timeless outfit whether on the seaside or in the city,” says Jacqueline Petipas, head of collections at Saint James.

Fisherman rib knitwear is another way to keep the look aquatic. “You can go traditional with a winter white chunky roll neck, but a navy version will give you a more iconic James Dean or Serge Gainsbourg look,” says Fuller.

Navy is the natural choice for a peacoat, but don’t discount the other colours available. Black and grey are comparably formal options, while khaki green gives off a military vibe. To avoid Captain Birdseye jokes altogether, try rustic, autumnal tones like camel or burgundy.

Below, the peacoat’s most natural allies are pinrolled jeans and wool trousers, but it can also work with more formal styles or other tactile fabrics like corduroy. Depending on your surrounding pieces, a sturdy boot, brogue or minimalist sneaker can all complete your look without clashing with what is a supremely versatile coat. A Note On Fit

The peacoat was designed for warmth, so it’s a close-fitting coat that has the added benefit of a flattering shape. From the high, wide collar, it should naturally taper to your waist before flaring out slightly at the hips. “A traditional style should sit just below the hip to allow for easy movement,” says Baumfield.

That said, as with most types of outerwear, it’s a good idea to try one a size larger than normal – especially if you plan to wear your coat over chunky knitwear or multiple layers.

When doing it up, remember to keep the bottom button unfastened like you would a double-breasted blazer. And on cold days, leave your scarf behind and pop the generous collar for a Redford-approved way to look great in the winter.

In 1160, William the Conqueror established the village of Saint-James on the Mont Saint-Michel bay in France. The sheep farmed in the local salt marshes provided the ideal strain of wool for knitting nautical gear to keep the local sailors and fishermen warm. Fast forward to today and still proudly made in France, the brand produces some of the finest and most authentic peacoats around. Founded as a mail-order business in Chicago during the 1960s, Lands’ End initially specialised in yachting gear. Inspired by the sea and the coast, it’s only natural the brand would eventually create a decent peacoat. Expect luxurious brushed wool and wool-blend options with welted hand-warmer pockets and lightweight PrimaLoft insulation for added ballast. Premium retailer Reiss is well known and rightly regarded for its selection of smart coats. Built to last, using better quality wools than most others in its price range, everything from contemporary herringbone versions to classic weather-beating options will slot seamlessly into any wardrobe. Steadfastly British, Gloverall’s heritage within outerwear stems from the 1950s when it sold thousands of surplus military coats after World War II. The brand’s ‘Churchill’ Reefer is crafted from 100 per cent English Melton wool and is ready to fight on the seas thanks to strong naval details including embossed buttons and an anchor motif.

Marlon Brando’s outerwear label of choice, American specialist Schott uses the natural properties of wool as the starting point for its numerous peacoats. As well as being breathable, the fabric can also absorb 35 per cent of its own weight in moisture without feeling wet, making it the perfect choice for the brand’s classically styled options. London Tradition may be a newcomer to the outerwear game, but the business founded in 2001 has already received a Queen’s Award for its lineup. Made in England, the brand’s peacoats add structured lapels and a rear vent to a quality wool construction, making it a great coat both on- and off-duty. Private Jack White V.C. was awarded the UK’s highest military honour during World War I, but that wasn’t his only achievement. He also founded a clothing factory in Manchester, England, which still thrives today, producing heritage menswear with a particularly good line of outerwear. The brand’s thick wool peacoat is detailed with a shearling-trimmed collar for added warmth and a luxurious finish. Though Mackintosh is best known for turning out excellent rain macs, it’s also a dab hand at peacoats too. Crafted in the UK from hard-wearing wool for optimal warmth, they are designed to fall at the hips for a contemporary silhouette that’s finished with wide wrap-over lapels for a dramatic collar-pop when the wind blows. Probably the most reliable place to get well-made heritage items at high-street prices, Marks & Spencer offers peacoats that faithfully recapture the feel of the naval original. Think vertical pockets, wide collars and a coarse, wool-blend feel. As well as classic navy, keep an eye out for more contemporary colours like camel. A genuine icon of British outerwear, Crombie has been making coats worthy of generals for more than 200 years. Buying a peacoat here will cost more, but you can guarantee high-end touches such as soft 100 per cent virgin wool and quilted linings, alongside a meticulous construction that makes it worth the outlay.