The Best Military Watches To Buy In 2020

These tough timepiece are built for action but win on the style front, too
Image: Charlie Thomas
By Laura McCreddie-Doak

“War, huh, good god. What is it good for?” once asked Edwin Starr. Well, watches for a start, Edwin. Conflict has long been an accelerator of technology and timepieces are no different. The need to make watches more resilient, more water resistant and more convenient led to numerous leaps in development that arguably wouldn’t have happened in peace time. But what exactly makes a military watch?

“Most military men and women need a watch that is both tough and accurate,” explains retired Air Force Colonel Richard “Nemo” Sweeten who now works on Bremont’s military and special projects.

“It needs to be able to withstand extreme environments and rough treatment. It should be able to withstand shock and vibration, temperature and pressure extremes and not be susceptible to magnetic and electro-static forces. From a soldier in the field to a pilot in a fighter cockpit, the traditional wrist watch is still important. Even though technology and systems like GPS and smartphones put the exact time at our fingertips, a watch is always a useful back up, and it’s always with you.”

But, off the field, military watches are just plain cool, and can carry a kudos and simplicity of design that other watches lack. Even if the only battle you’ve fought is the supermarket checkout queue, a military watch is a desirable bit of kit that will improve your style credentials tenfold.

What Is A Military Watch?

Broadly speaking military watches are round, have large, legible superluminescent numerals, a 24-hour track for all-night operations and matte or bead-blasted cases because shiny surfaces reflect light and could give away your position. NATO or G10 watch straps – the fabric strap specially designed by the MoD to be easily adjustable and with a looping construction that would keep the watch on the wrist even if the spring bar broke – aren’t a must but they do add some extra authenticity. The styles are also divided into three categories – ‘field’, which are basic, usually cheap, three-handers; ‘pilots‘ which have more accurate movements, bigger dials and extra complications such as a chronograph or details such as tachymeter scales, and finally ‘diving watches‘. These are the most expensive and the most robust with all the elements you’d expect on a diving watch – unidirectional bezel, lume, possibly a helium escape valve and water resistance varying from 200m to 1000m+.

The Best Military Watches For Men

This is a brand born because of the armed forces. In 1989, the US military approached asked mb-microtec, the company founded by inventor Oskar Thüler in 1969, to create a mil-spec watch using trigalight – the self-illumination technology Thüler had invented.

Since then its rugged no-nonsense design has become popular with the British military and is one of the few brands servicemen and women buy for themselves. And it’s easy to see why. The case is robust, the dial is easy to read, is good to 300m and the trigalight technology means that it is luminescent 24 hours a day without the need for external light. Perfect for night ops. 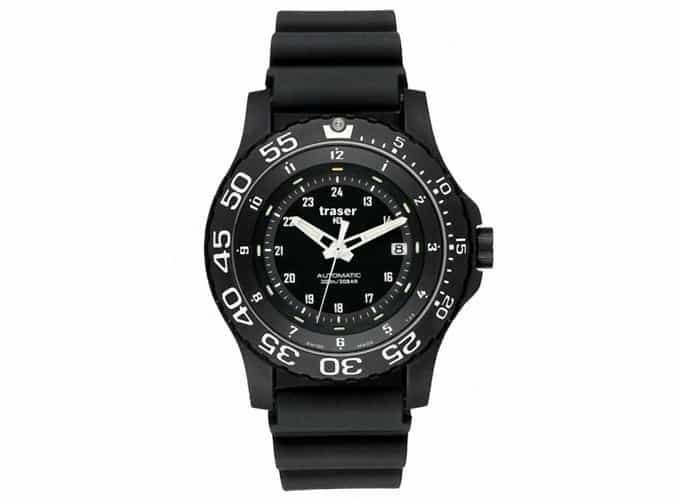 The military’s love of Bremont has never been a secret, but the pair have finally made it official with the Ministry of Defence (MoD) recently announcing it as its luxury watch partner. Alongside the Broadsword for the Army and the Arrow for the RAF, there’s this gorgeous slice of retro diver cool for the Navy – the aptly named Argonaut.

Rather than a chunky outer bezel, it has an inner rotating one, which keeps its case more streamlined, while the black dial with custom Superluminova in a mint shade is straight out of the Dirty Dozen (the name given to a small battalion of watches commissioned by the British Army during World War II – not the Lee Marvin D-Day romp). Despite being a tool watch, this feels like a timepiece more for a gentleman than officer. Naval dress whites optional. This might seem like a strange inclusion but, as well as being worn by everyone’s favourite double 0, the Omega Seamaster 300 has military provenance. The first generation – the ref.CK2913-1– was originally launched in two versions – date and no date.

The British armed forces took a shine to the former and, between 1967 and 1971 the Ministry of Defence took delivery of Seamasters that had been mil-specced with different hands and a screw-down crown and distributed them among the Royal Navy and the Army. So, strap on a Seamaster and imagine that whatever you do while wearing it is for Queen and country. Although it tends to opt for the phrase “military inspired” in its descriptions, a quick Google search reveals that Timex was issued to the US Army back in the 1990s and even today the brand is seen on the wrists of serving personnel.

This Expedition is particularly popular because it is hard-wearing, solar-powered so no worries about the battery running out when you’re out on ops in the middle of nowhere, and reasonably priced, so you won’t be precious about it getting knocked about. All that and it’s stylish enough to wear on Civvy Street too. While brands such as IWC, Jaeger-LeCoultre and Omega were supplying watches to the British Forces, in the US it was all about Hamilton. During World War II, the Pennsylvania-based brand made nearly 10,000 marine chronometers for the US Navy and supplied over one million of its Hack watches to servicemen.

Mud, rain, snow, tropical humidity – nothing could stop these resilient timepieces and the Khaki is the Hack’s direct descendent. The 21st century version is still just as basic and functional, and the addition of the NATO-style strap gives it a bit of on-trend, yet historically accurate flair. 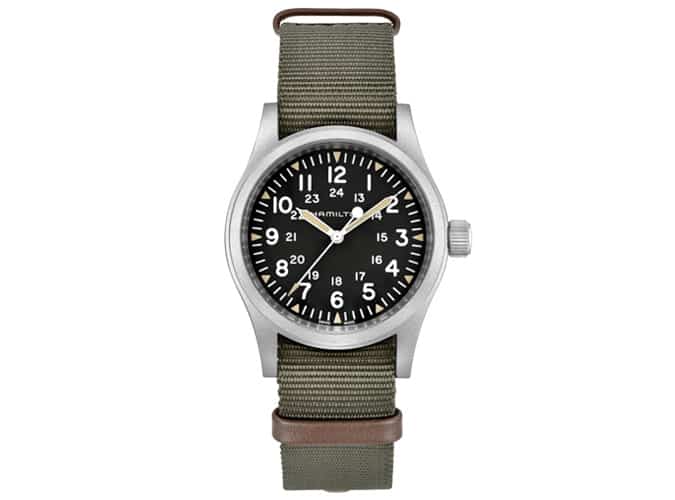 Despite being one of the Dirty Dozen, not everything Vertex made for the military was a success. In 1945, the company was asked by the War Office to make an Ordinance timing watch. Vertex worked with movement maker Lemania to fulfil the brief but rationing created a supply issue and the project was shelved. Now that the brand has been revived under the leadership Don Cochrane – the original founder’s great grandson – this monopusher chronograph has been put into production for the first time. And what a good thing too.

Available in either hand-wound or automatic and powered by an entirely new movement by Sellita, this is a watch that ticks all those military reissue boxes but still manages to look contemporary rather than slavishly retro. It’s also has a bit more of a dress feel, so maybe leave the M65 field jacket at home. Based on a watch that was apparently issued to British paratroopers during World War II, there’s so much to love about this Longines. Because they are based on specifications dictated by a country’s military, watches of this ilk can all look rather similar, but this offers something a bit different.

There’s the colour pop from the red, 24-hour inner track numerals, the details of contrast white stitching on the black alligator leather strap and the perfectly proportioned 40mm stainless steel case. It’s obviously a military watch but one that is more suited to the mess hall than the trenches. Calculators, fuses for torpedoes, depth meters, compasses – these were what Panerai originally supplied to the Italian Navy until its frogmen, divers who attached explosives to enemy warships during World War II, decided they needed watertight watches. The Radiomir was delivered to the Italian Admiralty in 1936 and by 1938 they were strapped to the havoc-causing wrists of the incursori.

Panerai and California dials (Roman numerals up top, Arabic below) have form and here it is combined with an eight-day power reserve and a black DLC-coated case. This watch has been accused of being a “Panerai greatest hits” but when your back catalogue is this strong, who cares if everyone already knows all the words? Also in the “watches service people buy themselves” category is the ever-reliable G-Shock. And that is not surprising – these watches were created specifically to withstand a 10m fall onto hard concrete. This G-Shock also features the brand’s patented Hollow Core Guard Structure to protect the quartz movement inside against impact and vibration including from heavy duty operations, the case has been specially mounted to be shielded from magnetic fields and it has a 200m water resistance so you can scuba in it.

There are all the other bells and whistles too such as countdown timer functions, world time and the option to set five daily alarms. More than enough to keep you amused while awaiting orders to ambush the enemy. First launched in 1985, the Aerospace Evo has become one of the most popular watches with the British military with many squadrons commissioning watches with their insignia on the dial. It easy to see why it is so popular; it’s a watch that says, “I do important things and I need a precision piece of kit to help me do them.”

Powering it is Breitling’s chronometer-certified SuperQuartz calibre, which is 10 times more accurate than ordinary quartz, is really easy to use, thanks to the ability to activate functions such as 1/100th of a second chronograph and countdown timer with the crown. At 43mm, it’s not as much of a beast as some Breitlings, but that just means it will still look good even when you take off your bomber jacket. Behind The Wheel: The Bentley Continental GT
9

How A Man Should Dress In His 30s