The Best Teeth Whitening Products You Can Buy In 2020

You can drive around in a gold-plated Bentley, wear a suit tailored by Jesus Christ himself and have abs with more definition than the Oxford English Dictionary, but if you curl your mouth to reveal a set of sweetcorn tusks, it will all be for nothing.

Hey, we know it sounds harsh, but it’s a cruel old world out there – especially for blokes with a demonstrably slender grasp on oral hygiene.

So, what can you do? From the glaringly obvious to the intriguingly lesser-known, the dentist-recommended to the seriously ill-advised, there are a variety of ways to whiten your teeth. But in the interest of safety and because our lawyers say so, let’s focus on the ones that won’t result in a trip to the hospital.

While in some countries it’s relatively easy to buy dangerous, corrosive chemicals and slather them all over the inside of your mouth, in most, there are rules and regulations to prevent such a thing from happening.

“EU law states that the percentage of hydrogen peroxide allowed in tooth whitening or bleaching products should be no more than 6 per cent,” says Dr Peta Leigh, a whitening specialist at London-based Elleven Dental and Orthodontics. “Products that use higher levels of bleach can cause [permanent] damage to your teeth.”

That’s EU law, though. Presumably when Brexit kicks in, we’ll all be allowed to gargle radioactive toilet bleach until our gnashers are glowing and our throats are bleeding. But for now, we’ll have to stick to the rules. (Disclaimer: do not gargle toilet bleach – even after Brexit.)

To get your smile up to scratch, these are the teeth whitening products you’ll need to make it happen, without poisoning yourself or ending up looking like Ross Gellar in that one Friends episode.

Hold the front page, this just in: you need a toothbrush to clean your teeth. It may seem obvious, but you’d be surprised at how many guys are quite content ‘cleaning’ their gnashers with a scabby old scrubber.

Granted, if you went back a little over a century and told the Edwardians that in the future a toothbrush would cost upwards of £100, they’d probably have had you lobotomised. But now we know that an electronic toothbrush with a rotating head is a modern grooming essential because it can remove up to 10 times more plaque for your pegs and gunk from your gums, too. It’s no good just brushing your teeth with plain water, nor should you experiment with shampoo, soap or the aforementioned bleach. What you’ll need instead is a reliable everyday toothpaste to get the job done properly.

There are thousands on the market, many of which claim to be able to give you teeth so white they can’t dance. To whittle them down, look for something with gentle whitening properties, a nice minty scent and low abrasion to keep that precious enamel intact. As well as fluoride, look for products that contain sodium bicarbonate that gently scrubs away at stains. Darkening teeth is a natural, albeit terrible, part of ageing. However, the process is sped up by stain-causing foods and beverages like coffee and acidic fruits, requiring more heavy-duty kit.

Most premium toothpastes focus on delivering targeted results such as whitening or fixing issues like sensitivity – so always check the box. Some whitening ingredients, including sodium bicarbonate, work because they’re abrasive, but that can also damage the enamel on your teeth. This paste opts for a natural, gentler active ingredient – arctic lichen – which can also prevent the build-up of bacteria. On the one hand, getting food stuck between your teeth is a great way to carry around a snack for later while keeping your hands free to Tinder. On the other, it’s an open invitation to all sorts of dental nasties; if the food is acidic, it will literally sit there rotting your teeth. Which means you may get a first date, but you certainly won’t get a second.

A fluoride-based mouthwash helps rinse out all those disgusting food particles that your toothbrush missed, and also combats the effects of a high-acid meal. Meanwhile, added hydrogen peroxide improves whiteness. When attempting to whiten your teeth, it may seem counterintuitive to brush them with a jet-black powder that tastes like bonfires, but there is some science behind it.

Activated charcoal has been celebrated for centuries for its ability to cleanse because it’s highly absorbent – the idea is that it sucks up the stain causing molecules on and around your teeth.

We should add that there has been precious little research into it, and some dentists warn that it could damage your enamel. But if you decide to try it (and many people have reported good results), wet your toothbrush, dip it in the powder and get to work. Oh, then clean your sink, which will most certainly look like the bottom of a BBQ. Everyone wants a Hollywood smile. It’s just that not many people want to pay the Hollywood prices. When it comes to at-home treatments, whitening strips are one of the most popular options. You lay the strips over your teeth and the whitening gel they’re coated with works to steadily remove stains.

They’re simple to use, reasonably priced and, depending on how badly discoloured your choppers are, can provide visible results in as little as seven days. It may sound too good to be true, but these are the facts. Tooth fairy’s honour. Have you ever looked at a pot of corrective fluid and wondered if it could be used to make your teeth whiter? Well, apparently someone in the world of oral hygiene did, and they came up with whitening pens.

These pocket-sized tools house a whitening gel that can be applied throughout the day to mask and lift stains quickly and effectively without causing tooth erosion (like corrective fluid probably, definitely, would). Always fancied being a dentist but didn’t make it past high school science class? At-home whitening kits are the next best thing, and they deliver some of the most noticeable results.

Generally, you’ll need to insert the whitening gel into a mouth tray, pop it in your mouth and sit around looking like a rugby player for 20 minutes or so. Once the course is complete (usually at least two weeks), you’ll be staring back at a glistening white set of grills. To get the million dollar smile of a Saudi Sheikh, you have to look after your teeth like one. Although we should add that oil pulling doesn’t involve actual crude petroleum.

This type of oil usually comes from coconuts, which, when swilled around your mouth, effectively ‘pulls’ away impurities. It’s a natural tooth whitening method that people have been using for years and the ‘airy-fairy, holistic remedies, granola and yoga’ lot swear blind by it. One of the most important (and most affordable) teeth whitening tools at your disposal, floss is boss.

Twice daily flossing removes bits of trapped debris, which (aside from being generally unattractive) can cause plaque to build up, helping protect against gum disease and giving teeth a shinier, healthier appearance in the process. 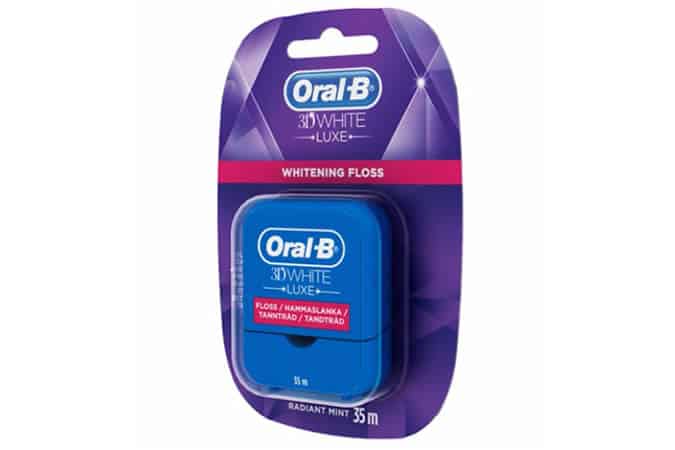