How To Get Chris Hemsworth’s Greatest Hairstyles

God-like styles from Thor himself
By Cassie Herbert

Only a few men in the world have locks worthy enough to be granted God-like status, and as an actor who has had to play an actual Norse god for the best part of a decade, maintaining that status has been kind of a pre-requisite for Chris Hemsworth.

The Aussie leading man is lucky that his character Thor has gone through a hair-changing regime similar to his own in that time. In the first film of the franchise he carried off long hair down to his shoulders, but by the third Thor: Ragnorak, Hemsworth was sporting a more practical, short, messy crop.

It’s an experimental hair arc most men go through in their 20s and 30s, while the hair is bountiful and you’re still young enough to be able to pull off most looks.

Here we take a look at Chris Hemsworth’s best hairstyles through the years and ask top hairdresser Bradley Smith, creative director at Bradley Smith Hair, how to get them yourself. You may not have the body of a god, but the hair is a lot less work.

One of the issues with flitting between short and long is you’re bound to get an overgrown mid-length in between. The key here is to keep going to your barber for regular trims along the way and using the right products at home to control it.

“Allow for roughly 4 inches on the top to allow the hair to be pushed over on the sides and top swept over with the fringe,” says Smith. “Ask for a scissor cut to create a softer and natural look. Be sure to leave enough hair in front in order to style, however too much length and you will struggle when styling.

“At home, apply a hair tonic to towel-dried hair and work throughout focusing on the roots, which will keep your hair hydrated whilst creating a natural hold through the day. Use a light shine pomade as this will provide some hold but maintain that natural look with a light shine to leave the hair looking healthy.” An eternal classic, this messy short back and sides will suit most hair types and face shapes but especially those with rounder faces where the style can take attention away from the roundness. Slightly thinner hair may also work better as thicker hair will require more maintenance to take the weight out of it and leave it easy to stick up when styling.

“Ask for a scissor cut over a comb on the back and sides leaving less than half an inch. You then want to create a disheveled look by point cutting hair on top to create the shape whilst working with your hair’s movement. To style, add a dash of sea salt spray and work from the base of your roots to create added volume and hold to the style. On a low-heat blow dry your hair and use your hands to create the basic shape of the hairstyle.

“With the outline of the style created, apply a coin-sized amount of matte paste into your palms and let it heat up before running through your hair.” 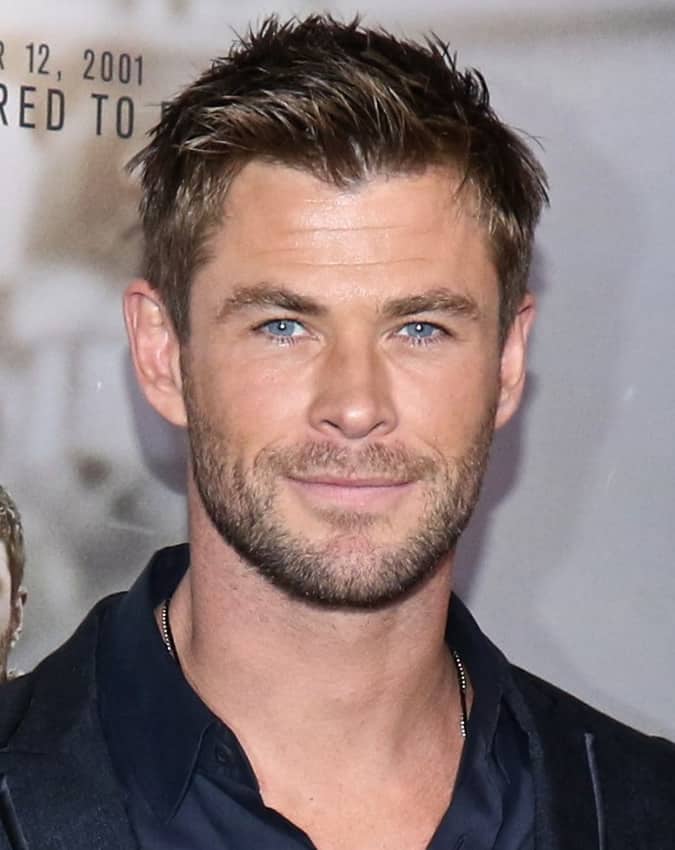 Caught In The Middle

Moving a bit further along, and down, from the last cut, this slightly longer, medium-length hairstyle only serves to further highlight Hemsworth’s mega-watt mug, especially those cheekbones, all while reducing the size of his forehead.

“Ask your barber for a layered cut with around 10 inches for the back,” says Smith. “A layered cut will create movement and texture throughout. With this style, there is an emphasis on the back, with it almost straying into mullet territory with the sides graduated over the ears. Finish up with a pointcut which will remove weight in bulky areas and create a textured finished.”

Too much washing will create dryness for hair this long. Natural oils are essential for keeping the hair refreshed but do also condition your hair at least once a week to keep the hair soft and nourished. “To add some shine try a light pomade for some shine,” says Smith. “Sea salt spray can be used to give a natural wavy feel to the hair.” A combination of the return of grunge and ’90s style with a welcome loosening of workplace dress codes means you don’t have to be from Asgard to wear long hair these days. The growing out process can be a pain, one Smith recommends you ease by going to see your hairdresser every six weeks, even if it’s just to cut off the split ends and remove weight.

“I would also say wavy hair is best suited to this shoulder length hairstyle as you can use the natural kink of the wave to your advantage when styling. For said styling use a few sprays of sea salt spray to complement your hair’s natural movement creating texture with added volume but still maintaining a natural look.

“To finish you may wish to add a pomade as this will give your hair a slight shine leaving your hair looking revitalised.” The ponytail has been a popular addition to men’s hair since the latter half of the 17th century. Back then these hairy appendages were tied with a silk ribbon. We’d say that’s a little extra for today’s tastes, especially when you can just use your other half’s hair tie like Hemsworth here, and tie the tail back round for neat and tidy low man bun.

You’ll have to have shoulder length hair if you want to tie it up as such, roughly 14 inches, says Smith. “I would avoid using elastic bands though,” he warns. “These will just break. Invest in some hair bands.”

You also have to take a bit more care when you get out of the shower. “You want to slick back towel-dry hair as this is easier to style compared to dry hair. With your fingers push from your forehead back to the crown. You then want to tie the knot around two inches above the nape of the neck, however, you can play around with this and see what is comfortable for you.” Okay, not as long as Odin’s but the same short, messy crop as before gets a little more gruff with the addition of some facial hair. To get your own beard Hemsworth-handsome you’ll need to trim it every two to three days on approximately a five-point guard on your beard trimmer, says Smith.

“For trimming the neckline, use the two-finger method, place your first two fingers on near the top of your Adam’s apple, and using the top of your index finger [as the marker]. Shave off everything below it. Then connect that point above your fingers to the backs of your ears, creating a ‘U’ shape.” Wearable Luggage: The Best Chest Rigs And Holsters To Buy In 2020
9