Curtains Hairstyles: Why They Work And Which Style Will Suit You

Every decade has a signature haircut. The fifties had a neat short, back and sides, the seventies had long hair and sideburns, the eighties had mullets. In the nineties, it was all about the curtain hairstyle, aka an eboy haircut. Worn by everyone from David Beckham and Brad Pitt to countless boyband members and that guy from Dawson’s Creek, it was the style for would-be heartthrobs and a generation of men getting more and more comfortable with the idea of grooming.

The curtains hairstyle should you have missed it or forgotten, is a style where hair on the top of the head is grown into a fringe and defined by a strong middle parting along the centre. It’s floppy, it’s quite high maintenance, and it’s very much back.

A quick glance at the spring collections from any number of brands will confirm the nineties fashion revival is still going strong, and with it is the haircut that defined the decade. But it wouldn’t be the first comeback, because the history of curtains goes back a lot further than the turn of this century.

“It was a hugely popular haircut with men at the end of the 19th century,” explains Josh Gibson, principal at the Sassoon Academy, “with famous icons like the writer Oscar Wilde and artist Aubrey Beardsley sporting the look. The trend continues among working-class men until the end of the 1920s, and then returns briefly when hippie culture spreads from America in the 1960s.”

The 1990s revival of the eboy haircut came with the rise of grunge and home-grown indie bands. Happy Mondays frontman Shaun Ryder, Placebo singer Brian Molko and Blur bassist Alex James were notable champions of curtains. Then the boy bands took over; Take That wore them (apart from Gary, who was still in his awkward phase) and Westlife, along with every teen TV star (see Jared Leto, straight out of the test tube, in My So-Called Life) and the look subsequently filtered down to the teenagers and beyond.

How To Wear a Curtain Haircut Today

Back in the nineties, this middle part men’s cut looked best on people with poker straight fine hair, and is typically what people think of when eboy style comes up. This type of hair emphasises the strong parting that defined the look, but not everyone had the right kind of hair or cut (see Olly Murs). It didn’t stop them for pursuing an eboy haircut, and neither should it stop you, because modern curtains have evolved. In fact, that floppy look with a rigid parting didn’t really do anyone any favours, and now, a bit of texture is your friend. 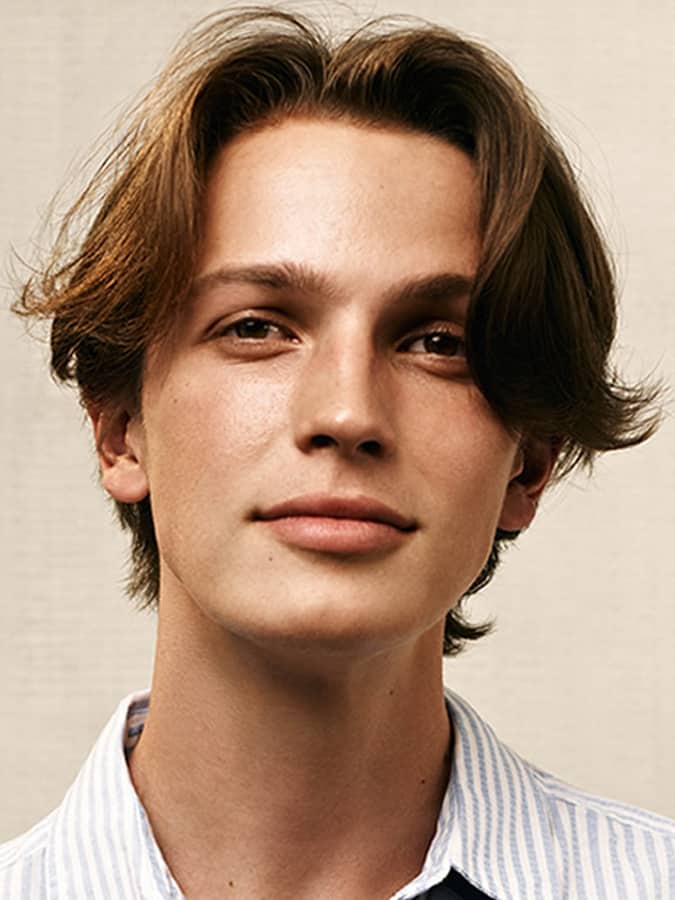 “The eboy look can be updated by making it more personalised to you,” says Gibson. “It tends to suit narrower, boyish face shapes but can be undercut to make it look slimmer on the face. Essentially, this haircut works best on someone with a natural middle or offset parting.” The hidden bonus of our recent love affair with quiff haircuts means that some of us probably have some length left at the top. Simply stop slicking it back and let it flop apart and voilà you’ve got the foundations for curtains.

What To Ask For

First, identify your favourite curtains role model (see below) and ask yourself if you have similar hair types. There’s not much point adopting a style if it doesn’t work for your hair. It just means more hassle and time spent styling it (unless you want to embrace a more radical option like an undercut or permanent relaxing treatment, which can make hitherto impossible looks achievable). “If your hair is curly or wavy, it might be better to go for a slightly longer version to avoid getting a really thatched look,” advises Gibson. The thatch he refers to happens when very thick hair is given a wedge shape underneath or isn’t styled properly on top. There’s a case here for an undercut if you want the look but your hair is super thick.

“With straighter hair, it’s probably best to ask your stylist to keep the length at the cheekbones, as this will frame the face,” says Gibson. You can leave it long and layered at the back, or take the lengths to just above the ears and keep it tight at the sides for a classic look.

For anyone currently shuddering at the memory of frizzy thatch-like curtains, take heart from the fact that today’s hair products are about million times better than they were back then, when salt sprays, matte wax, hair oils and straightening irons didn’t exist. In fact, in the nineties there wasn’t much apart from wet look gel, crunchy mousse and hair spray on the go. Men with curly hair especially had it rough, says Gibson, who recommends “leaving curly and wavy hair to dry naturally and using a generous amount of Illuminating Oil by Sassoon Professional, or Sassoon Curl Form to get that grungy lived-in look.” We’ve talked about co-washing before (forgoing the shampoo every other day to wash with conditioner instead), and it can help dial down the frizz and give curls definition.

For straight hair, it’s easiest to take it polished: “Use less product and dry downwards and forwards using a vent brush to keep the follicles flat and to stop flyaway hairs,” says Gibson. Visit your barber as often as you normally would, even if you’re growing it out. And never, ever use gel, or risk looking like Peter Andre.

Take some inspiration from these celebrities, who rock curtain hairstyles in a variety of ways. You can see this nineties favorite in action and have a reference point for your own cut. It’s hard to believe, but before he discovered cheese, the Cotswolds and the Conservative Party, Alex James from Blur was cool. Damon Albarn might have had more stage presence, but as bassist for one of the biggest bands of the nineties and with enviably pliable hair that drew attention to his good looks it’s not surprising he had as many fans. The godfather of grunge is also the king of the bed head. Nirvana frontman Cobain sported long, bleached curtains that hovered around his collar with dirty looking roots at the top. More like a West Coast surf bum than a true curtains devotee, he made unwashed, skanky hair the epitome of cool. He might babble incoherently at times, but Shaun Ryder made genius music with the Happy Mondays and Black Grape. During the peak Happy Mondays Pills ‘n’ Thrills and Bellyaches moment, Ryder sported a rounded mod bowl with a strong centre parting. The world lost an incredible acting talent when River Phoenix died prematurely in 1993; it also lost a fine head of hair. During his short but dazzling time in the spotlight, Phoenix never put a follicle wrong in a variety of looks including a perfect example of long dishevelled curtains.

Reeves has dabbled with different lengths over the years, but his ultimate curtains moment came as Ted in Bill and Ted’s Bogus Journey. His hair has the optimum thickness and texture to make a perfect example of nineties curtains. Bringing it back to the present, Charles Melton, American Riverdale actor, (no, we’ve never seen it either) recently got caught out by some gossip website for ‘fat-shaming’ (never good) or something. We can learn to forgive that on account of the excellent short curly curtains he’s wearing. The best example of a modern eboy haircut is also our haircut of the year.  Timothée Chalamet’s hair is now the stuff of legend, all the proof you need that this once-controversial style is right for the times. TC prefers an offset parting with his natural texture.

Summer has arrived. Beer gardens and barbecues beckon, and finally the time has come to hang up your woolly hat. The...

7 Common Men’s Hair Mistakes (And How To Fix Them)

Hair. How difficult can it really be? Quite, it turns out. From using the wrong products to using too much of the right product...