Not since Michael Jackson and his iconic Thriller has a public been so entranced by a music video. But in four minutes Donald Glover under his musical moniker Childish Gambino stopped the world on its axis and (for a brief period) stole the mantle of most talked about Donald. A slot hosting Saturday Night Live followed the ‘This Is America’ vid, as did the release of blockbuster Solo: A Star Wars Story in which Glover had a starring role as beloved fan favorite Lando Calrissian. For a good couple of months, you couldn’t load YouTube or take a gander at Instagram without seeing Glover boogying around a warehouse topless in sharp grey slacks or charming his way through an interview.

Glover is a Renaissance Man who mixes acting, music, comedy, and activism into the working week. And as his career has matured, his style has evolved accordingly. Breaking into the public consciousness as fresh-faced Troy Barnes in gawky comedy Community, Glover was all bright tees and ill-fitting jeans. Now there’s a distinguished beard to frame his face and an array of super-luxe tailoring options (try and catch him without his beloved ) to adorn the shoulders of a man who has become one of the biggest and most current entertainers around. Oh, and in 2017, we named him the best-dressed man on the planet.

For an artist who tackles such profound and serious conversations like racial politics and police brutality, Glover in contrast doesn’t take his style too seriously. You’re not going to see any pouty red carpet poses in all-black turtleneck and suit combos here.

That’s not to say that Glover is a slob living in ketchup stained sweats. Instead, Childish Gambino’s style is done with a knowing wink, using a wide ranging and nostalgic color palette with tailored suits in the earthy orange and brown tones of 1970s fashion or the lurid purple and reds of the 1980s. The choices would look comical were it not for the details – contrasting lapels to break up a suit, tapered fits, pinch rolls on trouser hems to show off a bounty of plush loafers.

Jeans are strictly off the menu, as Glover much prefers a pair of pleated trousers or some slightly tapered chinos worn with slip-ons minus socks. Knitted polos are also worn on the regular, as are a couple of gold chains. Think Alain Delon, if the French new wave star was a whisky-doused second saxophonist for Funkadelic with a penchant for sultry love making and even saucier saxophone solos.

A jet-setting life flitting between headlining festivals and meetings with studio execs is a far cry from a youth spent in suburban Atlanta. And when everyone wants a slice of you, it’s time to buy a suit befitting your man-in-his-prime stature. A double-breasted suit tends to fit this bill but Glover is a creative – the slicked back city boy DB won’t work here. Instead of pinstripes, he goes textured in a lighter shade than navy. Wear with a crisp white shirt and some fancy, yet understated shoes and you’ll be the talk of (tinsel) town. You Talking To Me?

While Glover’s facial expression might look a little fazed by all those red carpet camera flashes, his outfit knows exactly what it is doing here. While it’s quite a muted piece of tailoring for Glover, again the texture running through adds some sophisticated interest. Wear with a flouncy, printed shirt for another way of making the look appear more debonair (John Legend is the master of this) while deep brown shoes work well with pretty much every suit color. A Thumbs Up From Donald

Donald has been getting a bit of a bad rap lately but let’s not forget the OG – Mr. Duck – who is getting some lovin’ from his namesake here. But just how do you get away with adorning your wares with a kid’s cartoon when you yourself are well into your thirties? Well, the 100 percent wool cardigan by helps, especially because it utilizes an opulent and grown-up shade of red. Also don’t fight fire with fire when a neutral black tee will cool that cardigan down, while some beat-up, retro sneakers keep the quirkiness running through the outfit without compromising on style. 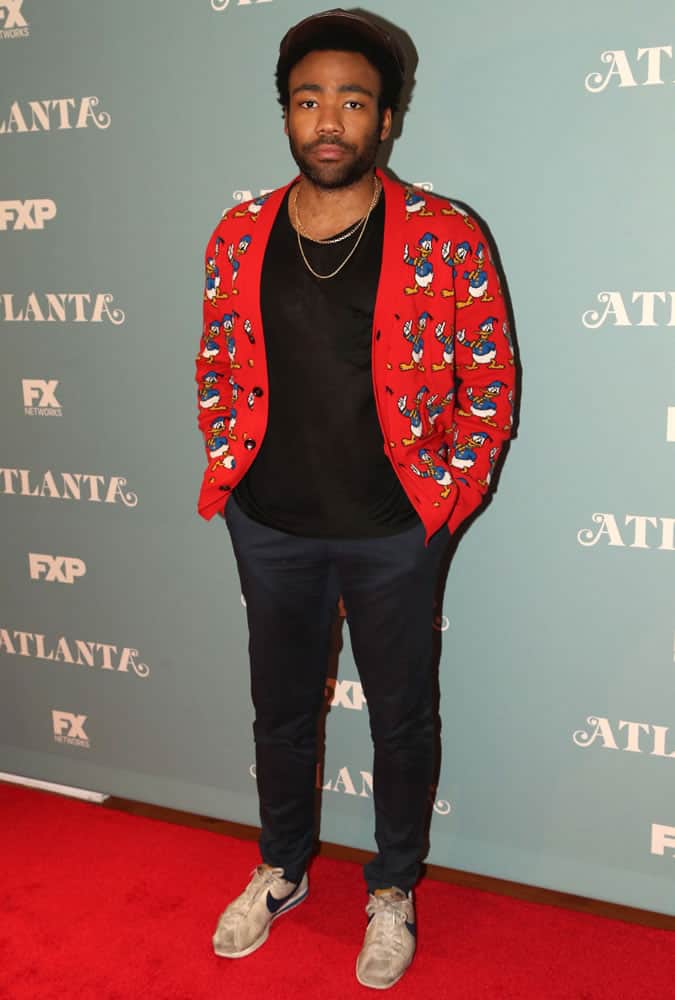 Yes, there is something troublingly Austin Powers about Glover’s get-up here but take out the blouse that looks like a doily, trim the cut around the waist and shoulders and break things up with a classy contrast peak lapel and you can actually look groovy in a purple suit. It’s also proof that there’s a great deal of power when you keep everything neat and tidy. Note how exquisitely tied the bow tie is, how delightfully shiny the shoes are, how the suit is pressed to perfection. Mum was right you know – you won’t get anywhere in mucky clothes. If you’re looking for a gateway into statement menswear, an extravagantly patterned shirt is the easiest way to go. Pair with smart chinos or tailored trousers and a laissez-faire shirt tuck, for a look that lets the shirt do all the soapbox shouting. Although, we would suggest having the trousers cut a little tighter and with a crop, if only so you could see Glover’s beloved horsebit loafers more readily. The knitted polo shirt and tailored chinos look is the perfect outfit choice for the after-work beer garden with the boys, even if their self-care game ain’t quite up to yours. (Chewy we’re talking about you here – ever heard of tweezers, mate?) Unless you’re the Pope or playing at Wimbledon (and Donald Glover, it seems) you’ve probably never thought about wearing all-white. To pull it off it requires you to play by some rules. Confidence is required and shrinking violets need not apply. Also bear in mind the need to mix the white up with different patterns, shades and fabrics like Glover has done with a herringbone pattern in the off-white jacket paired nicely with the screamingly white, flowing trousers. And finally, if you yourself have the complexion of a whiteboard perhaps give this look a swerve – it works much better on gents with a darker skin tone. The Prince Of Orange

Dare we say it, but orange is probably the trickiest color in menswear to get right. The true test of this tonal dressing nightmare is picking the perfect color accent to go with it, lest you end up full pumpkin and someone tries to make you into soup. Black is best in this situation, providing a stark change-up from the vibrant brashness of the orange. Also, may we applaud the cut of Glover’s suit – there’s not an unwelcome fold insight, especially around those difficult-to-cut shoulders. It takes a brave man to wear a statement Dolce & Gabbana jacket to an event sponsored by Hugo Boss, but are you going to tell the greatest maverick in Hollywood right now to take a trip to the cloakroom? We’re not. You don’t mess around with a man’s outfit when it’s working this well. Bomber jackets are (still) hugely on-trend but they have perhaps got into the rut of all looking quite similar. A leather version is a good way of changing that, paired with simple black trousers and stylish black loafers down below. Will You Go To Prom With Me?

While Glover’s style may have evolved from his Community days into something altogether more sophisticated, he’s still privy to some geeky style choices, only now they take the form of exaggerated high fashion. Eighties-styled tailoring is making a run for next year’s summer season, so while you might still associate the prom suit with awkward throwback photos, the look is very much in tune with what the fashion world is thinking. The black accents in the lapels, pockets and on the ribbon down the trousers sharpen and break up the look as the cream bow-tie and loafers match top with bottom. It’s flamboyant, of course, but the color seeks to complement rather than grab attention away from the suit. If the devil was into making politically inflected rap and music to make babies to (see the seductive slow jam of ‘Redbone’ for starters) this is what we’d get – a red hot, kinda sleazy, but definitely fire-emoji outfit. It’s a look and one that if you go for you have to just jump into and so we get three buttons undone and double gold chains and white shoes. Further proof that Gambino likes a knitted polo, here it channels true Alain Delon style paired with soft pleated trousers for an outfit that made us crack out the iPhone and check it wasn’t 1959. It’s an enduring look, proved by the sheer amount of style icons that came out of the decade, and other than the leather collar and a contemporary taper in the pleated trousers, Glover doesn’t seek to modernize it. You don’t mess with the classics. Nothing says 1970s tailoring like a brown suit that matches your grandmother’s couch. But brown suits have been going since the dawn of tailoring time and still don’t feel overdone when compared to grey or navy. Elsewhere, the V-neck jumper came back into fashion last year after a lengthy hiatus and while nine times out of 10 we would pick a more basic and plain jumper to sit under a suit jacket, a number is always going to draw some admiring glances. Sing It In Suede

When you’re certain it’s not going to rain (suede and moisture is a match made in hair frizz) you can’t go wrong with plucking out an overshirt in the fabric for a luxurious option that stands above admittedly cheaper cotton rivals. A tight, military tuck on the white tee underneath leaves no sloppy folds and neatens the look, contrasting well with the looser overshirt on top. Camel and black is a failsafe combo, too. 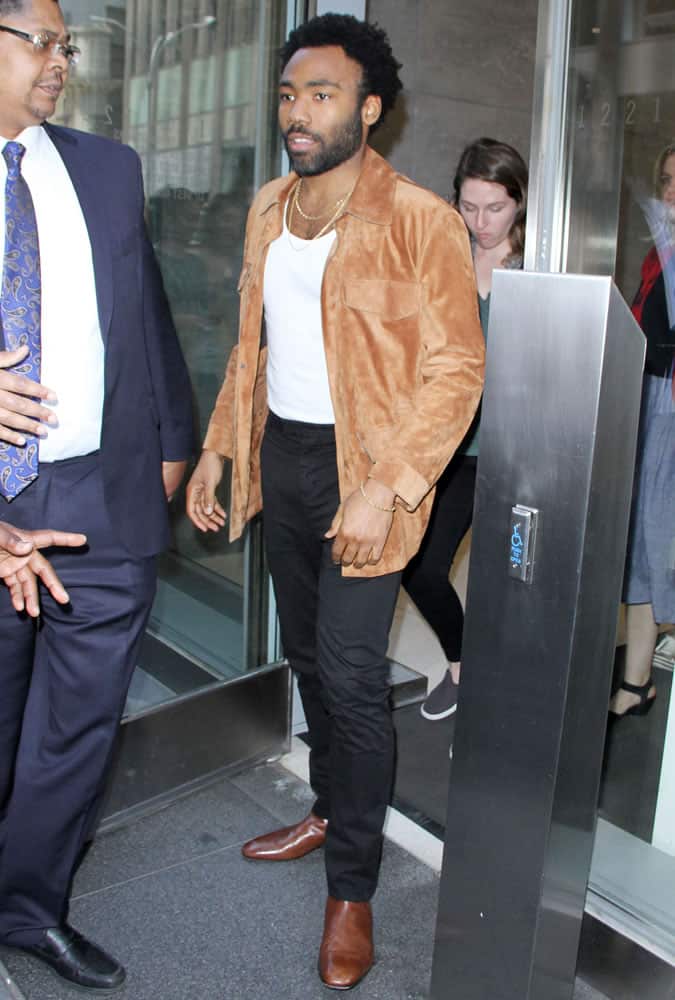 As we have seen with Glover’s mastery of red and white tailoring, he is a bit of a pro when it comes to tonal dressing and slotting different shades of the same color in with each other. If red’s a bit much for you, try the same trick in a muted color – the shades of blue Glover sports here are ideal. White, as shown by Glover’s sneakers, is also the safest color to bring to a tonal outfit and can make the whole fear of dressing in one color less daunting.