How To Match Your Sneakers To Your Outfit

What to wear with everything from minimalist sneakers to retro running shoes
Image: Burton
By Luke Sampson 08 February 2018

It seems unbelievable that trainers were once only appropriate for gym-goers, shoplifters and rappers with enough swag to pull off full streetwear looks all day, every day. Right now, though, the sneaker market is booming. The relaxing of dress codes means you can wear your kicks to almost any occasion – and who doesn’t love shoes that are less likely to leave your feet in ribbons of skin after a day’s wear? That’s right, nobody.

There’s a lot of choice, but unfortunately it’s not that easy to slip into something more comfortable. There are rules for wearing trainers well – which we take very, very seriously. Sure, minimalist designs go with most things in your wardrobe, but what about the trend for chunky, ugly sneakers? Or retro runners? Or skater-style slip-ons?

Helpfully, we’ve written them all down here so you never put a foot wrong.

Luxury, minimalist sneakers may be the shoes that convinced men to do the unthinkable (wear sports shoes with a suit) but right now, rumblings of a mutiny are afoot and big, bold trainers are on the march. Oversized soles, clashing colours, larger-than-life logos and – dare we say it – downright garish designs are having their day. There’s a new breed of trainer in town that DGAF about clean lines.

With all that attention seeking going on, you’ll need to tell the rest of your look to chill out a bit. The Guardian’s menswear editor, Helen Seamons, says: “The trick to styling statement trainers is to play down the rest of your outfit. Think Balenciaga’s dad-core look – straight-fit jeans and a very regular-looking shirt or sweatshirt will do.

“You’ll [also] need to stick to plain colours and avoid big logos and prints, or you risk an outfit that becomes too shouty.” Easy does it guys, easy does it. 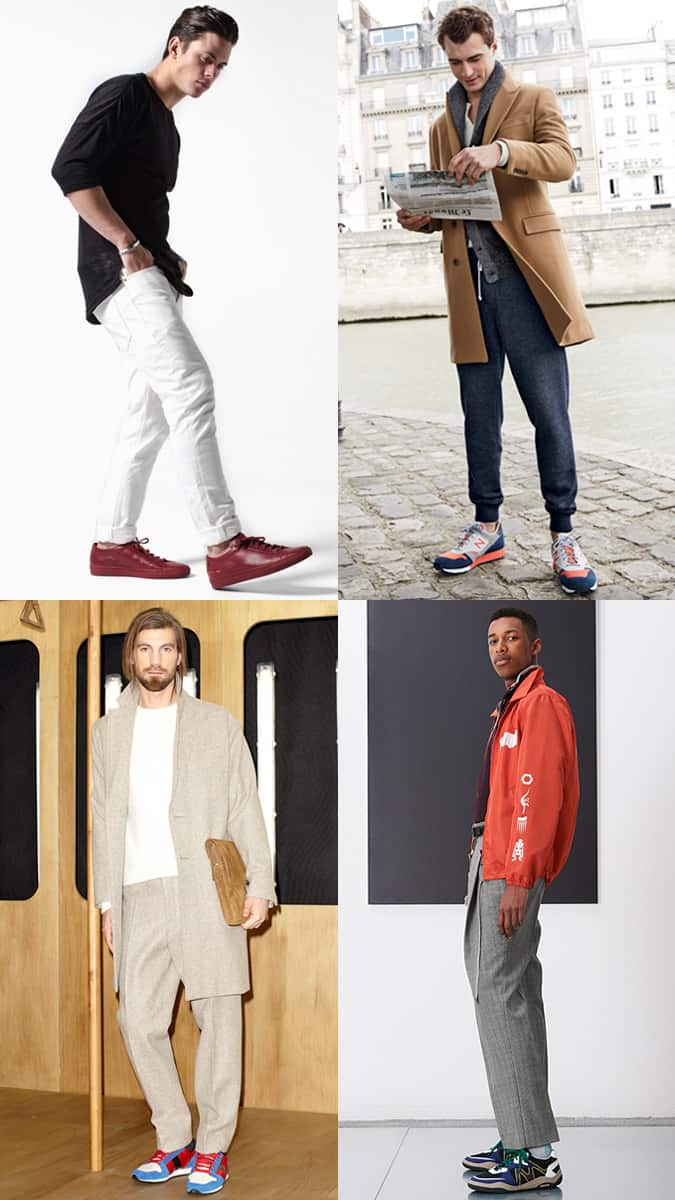 The Rule: Wear With Modern Pieces

In an age of global uncertainty and bizarre daily political developments, is it any surprise that we’re getting all misty eyed and nostalgic for times gone by? Retro trainers are the footwear equivalent of battening down the hatches, sticking on some Britpop and mentally blocking out the utter chaos of the 21st century.

Throwback trainers aren’t an excuse to crack out a highly flammable pastel tracksuit though. They should nod to the past but be firmly planted in the present. “Reinventing retro trainers can be difficult,” says George Nicholson, deputy editor at The Idle Man. “Cropped trousers, however, are perfect for giving your shoes a new look. Team with an overcoat and a simple T-shirt [or sweatshirt] and you’ve got a contemporary spin.”

Another style switch up you can make is to pair them with luxurious wool trousers for an eye-catching high-low combination. Trainers on their own are already conducive to happy feet, but take away the faff of lacing up and you’ve got a genuine feat of human ingenuity. Until fairly recently, only skaters ‘got it’, but now slip-ons are for anyone in favour of kicking their shoes off: i.e. everyone.

It’s not the noughties though, and (presumably) you’re not desperately hoping that Avril Lavigne will notice you, so steer clear of anything that’s textbook ‘Sk8er Boi’. “The classic Vans silhouette was everywhere this season, but the style went high-end: Tom Ford, Common Projects and Givenchy are just a few of the brands [which produced their own take],” says Paul Higgins, brand stylist for Reiss. The Rule: Wear With Smart-Casual Pieces

America, you can keep your basketball high-tops because quite frankly, when it comes to true sports footwear icons, the terrace trainer (popularised on England’s football terraces) is untouchable. Okay, we may be – slightly – biased but there’s a reason that the terrace trainer’s gum soles have been pounding the pavement for decades; they’re truly classic kicks.

As such a ubiquitous shoe, however, there’s every danger of being mistaken for a rain-sodden teenager chilling at the shopping centre on Saturday. “Terrace trainers provide an instant way to add a dash of vintage to a outfit,” says Phill Tarling, a menswear stylist who has worked with the likes of Tom Hardy and John Hurt. “When it comes to styling, try getting smart.”

That means swerving the joggers and keeping it classy by teaming with heritage pieces like wool trousers, macs and houndstooth coats, or contemporary staples like cropped trousers and chambray shirts. Leave the football scarf at home, too. Cast your mind back 10 or so years, if you will. Minimal trainers weren’t a ‘thing’ and the closest you’d get to inconspicuous was a pair of Converse Chuck Taylors, which (though admittedly great) are pretty standard issue. Then came the minimal movement, when everything got a Scandinavian dose of good taste and designers began to rein in the crazy.

Minimal trainers are really, really, ridiculously good looking, so you’ll need to keep the surrounding pieces simple and the lines of your outfit sleek to do them justice. Think tailored separates, pared-back normcore or something a little more formal. “Styling a sharp suit with trainers is one of my favourite looks for the office,” says Seamons.

“A pair of plain leather lace-ups from Common Projects or Eytys will look smart and modern, though the high street has lots of versions from as little as £25. The most important point is to keep them pristine by investing in some shoe wipes to restore the box-fresh look for every outing.” It’s not just the cut of your clothes that should be clean. Technology without pulse-quickening design is never satisfactory. Case in point? Tablets that aren’t iPads. We don’t care what they can do if they’re not wrapped in cool-to-the-touch curved aluminium. Thankfully, high-tech trainers have finally figured this out. So, alongside jargony materials and cushion technology, lifestyle runners now have beauty to match the brains.

When styling, you shouldn’t completely shy away from their sporting credentials, but you don’t want to look like you’re en route to the gym either. Sporty but sharp is the aim, says Nicholson. “Nike Flyknits and Adidas Ultra Boosts are perfect for adding an element of streetwear to your look.” He recommends tailored overcoats or distressed denim to counterbalance the gym vibe, but you need an athletic element somewhere in your look, so consider a hoodie or luxe slimline joggers. Rather than, say, a sweatband. The Rule: Wear With Casual Pieces

Chances are, your first encounter with high-tops was as an awkward teen, rebelling against ‘the man’ by conforming to the perennial shoe choice of angry adolescents everywhere. We’re optimistic sorts, so we’re assuming that you’ve ditched the me-against-the-world mentality, which means it’s now time to reconsider this trainer style – and how to wear it post-high school.

“When wearing high-tops, think more smart-casual, less student union,” says Higgins. He recommends slim selvedge jeans, a flannel shirt and worker jacket for a classic dose of Americana, but they also work with everything from tailored chinos to combat pants, patterned knitwear to minimalist bombers. If it’s casual but not sloppy, you’ve got an all-star look every time. The Ultimate Guide To The IWC Portugieser
3

Wearable Luggage: The Best Chest Rigs And Holsters To Buy In 2020