Isaac Carew Interview: Lessons In Food And Style From A Man With Very Good Taste

There’s a growing appetite for Isaac Carew. As an in-demand male model, he’s no stranger to international campaigns and catwalk shows, but he’s fast becoming as known for his gastronomic chops as his cheekbones.

Classically trained, the 32-year-old has his own YouTube cookery show, The Dirty Dishes. He has a cookbook of the same name. He even has his own chilli sauce, which is almost as hot (right now) as he is. A regular on the London party circuit and pages, he’s tailed by paparazzi around town and by 600,000 followers on Instagram – some of them in real life too.

Meeting him IRL, you can understand why. Decked out in on-point partywear for FashionBeans’ photoshoot with premium British label Reiss, he radiates the magnetism of the professionally good-looking, along with a slight aura of hyperreality – perhaps because you’ve seen him so many times before, or perhaps because he’s bloody tall.

A man-about-London-town with impeccable taste, we’ve joined him in the British capital because who better to rustle up tips on the city’s best nightspots, or pointers on what to wear to them?

Carew was born and raised in London and began honing his taste buds on a stool watching his chef dad cook at Covent Garden restaurant Joe Allen. He decided, age seven, to follow suit. At eight, he was earning £20 every Saturday by picking spinach and cleaned mussels for his old man and godfather (also a chef) at La Bouchée in Kensington.

Having graduated catering college, Carew plied his culinary trade first at House Hotel in Hampstead then the Junction Tavern in Kentish Town, where his colleagues, unbeknownst to him, submitted an application to the Gordon Ramsay Group. He withstood the heat and fiery language at Michelin-starred Angela Hartnett at The Connaught in Mayfair.

Aged 22, he was scouted by a model agent outside Selfridges on Oxford Street and became the face (and hair) of a veritable department store directory’s worth of brands, from commercial to catwalk.

Today, he’s strutting around the Kimpton Fitzroy Hotel in Russell Square in a brand that gave him some of his first work. Carew shot for Reiss early in his career – “I think it was the first year I started modelling” – and has fronted the brand’s campaign and look book multiple times. 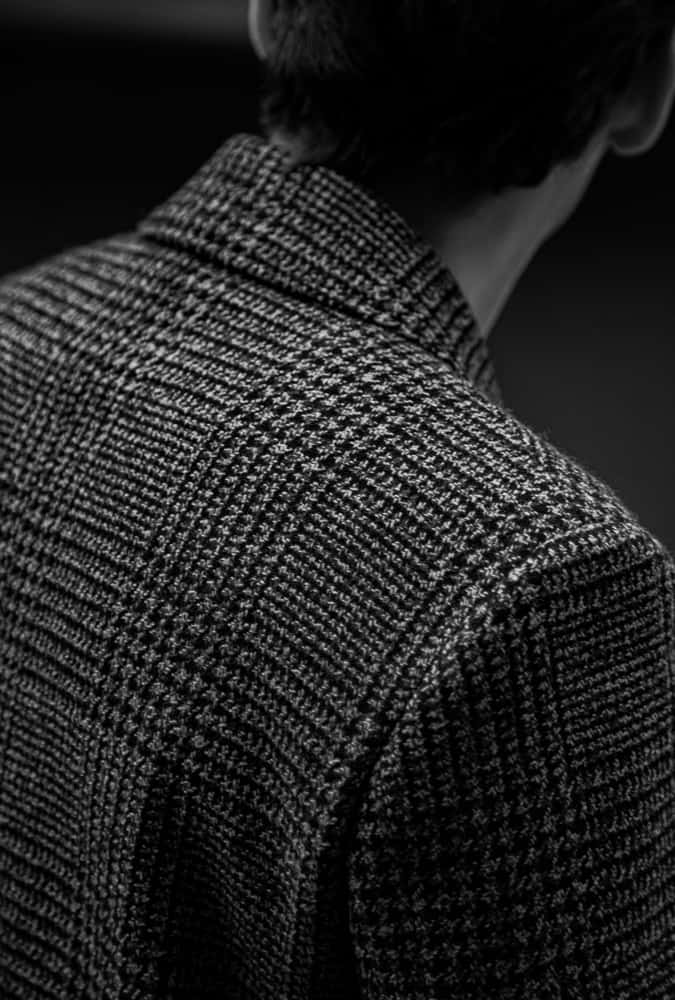 These days he can also be seen on the cover of his own cookbook, which as Gizzi Erskine blurbs, is “full of easy-to-follow dishes that look as tasty as he is.”

Spun off from his YouTube channel and website of the same name, which began as Instagram photos of meals he’d cooked, it’s a piquant counterpoint to clean eating, and the myth that models only subsist on salad, or Diet Coke and cigarettes. “I eat tons of pasta and burgers and whatever,” he says. “I enjoy my food.”

He used to work it off by cycling and boxing several times a week but is recovering from surgery on a slipped disc so he goes on hour-long walks daily, “a bit like a grandad.”

Not content with preparing pumpkin and tarragon soup for the hosts of breakfast show This Morning, Carew has co-hosted a TV show on Channel Four, Tried And Tasted: The Ultimate Shopping List, with Michel Roux Jr. And he’s been followed on Instagram by Gordon Ramsay himself. Carew encountered his boss’ boss just once during his stint at The Connaught. Filming for TV, Ramsay said he should be playing basketball rather than cooking a risotto (which he did compliment). They’ve since talked about joint projects.

You don’t have to be a model scout to spot Carew, who thought that the woman who ran up to him was a scammer: he’s officially listed as 6’2”, which seems an underestimate. He’s often compared to a young Elvis Presley, or occasionally the actor Jonathan Rhys Myers, although a shop assistant did once liken him, inexplicably, to 6’7” footballer Peter Crouch. 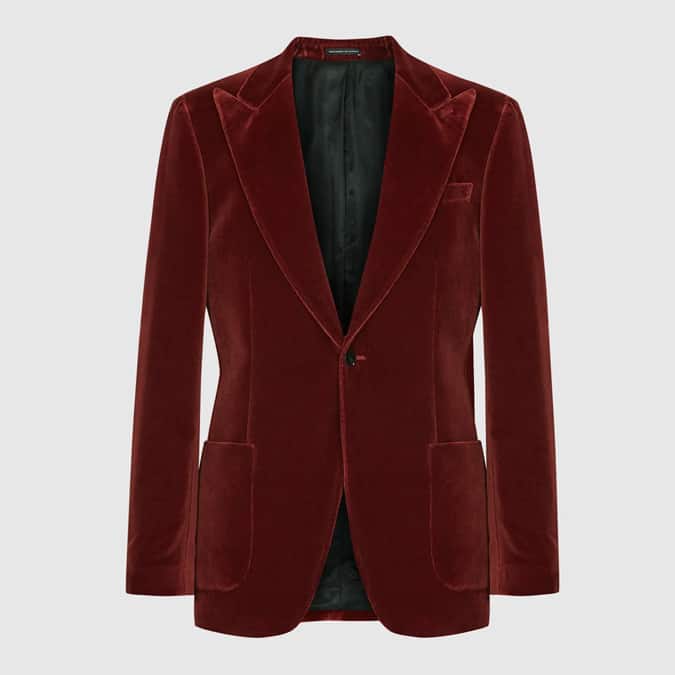 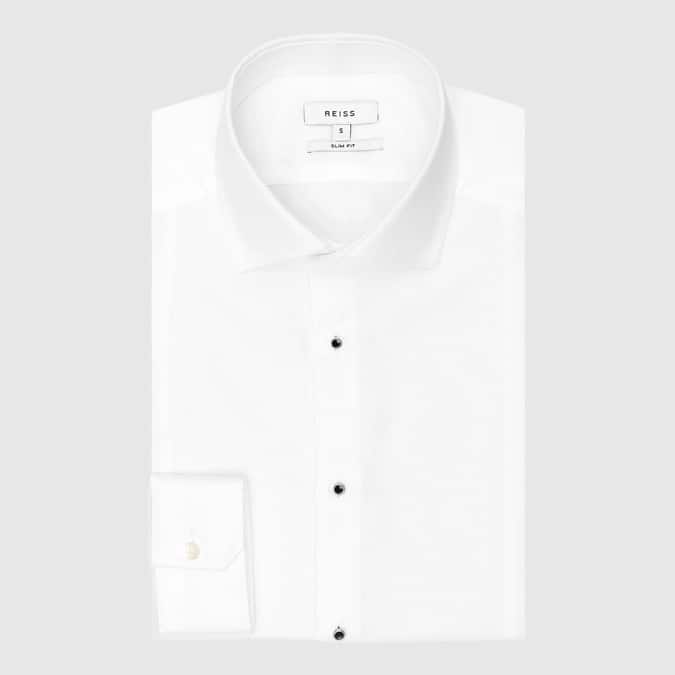 Carew’s personal style has taken some unexpected turns. He used to go to Camden with his mum to buy surplus military clothing – “I was obsessed by the streamlined look” – until that uniform fatigued in year six. When he was 13, he watched a new gangster film – The Long Good Friday, Lock, Stock & Two Smoking Barrels, Snatch – every weekend with, appropriately, his godfather.

“I basically wanted to look like a Cockney gangster,” says Carew. That meant roll necks, like the black one he’s wearing now, and Del Boy outerwear, like the model’s own brown alpaca coat he wore to the shoot, which comes out every winter. He puts on the character of a proper East End geezer so he doesn’t get eaten alive by the sharks when trawling Billingsgate fish market.

Then there was his baggy hip-hop phase. (He even sized his trainers up from his usual 11.) Then the “bit surfer-y” phase after three months travelling in Argentina and a year working at Hartnett’s restaurant Cielo in Miami, just before he got scouted. Then when he entered the fashion industry, he adopted “model style”: T-shirts cut into vests, skinny jeans, boots, chains, give-a-fuck attitude.

Having trotted the globe as a clotheshorse, he’s observed British style, or more accurately “British styles”, traditional tailoring and teddy boys, exported as far afield as Japan: “You can go to different parts of the world and see British style stand out.” Even if it’s hard to define as one thing.

These days, his uniform is black, unless he’s going to an event, in which case he’ll add something that stands out, like a pink blazer or a “party shirt”. Not in the naff sense: “Just something which is a bright colour, or maybe a nice pattern.” He doesn’t wear skinny fit anymore: it’s either tailored or baggy, but in a more stylised way than his 50 Cent period. Right now, he’s got his eye on the micro-check suit he’s currently wearing. 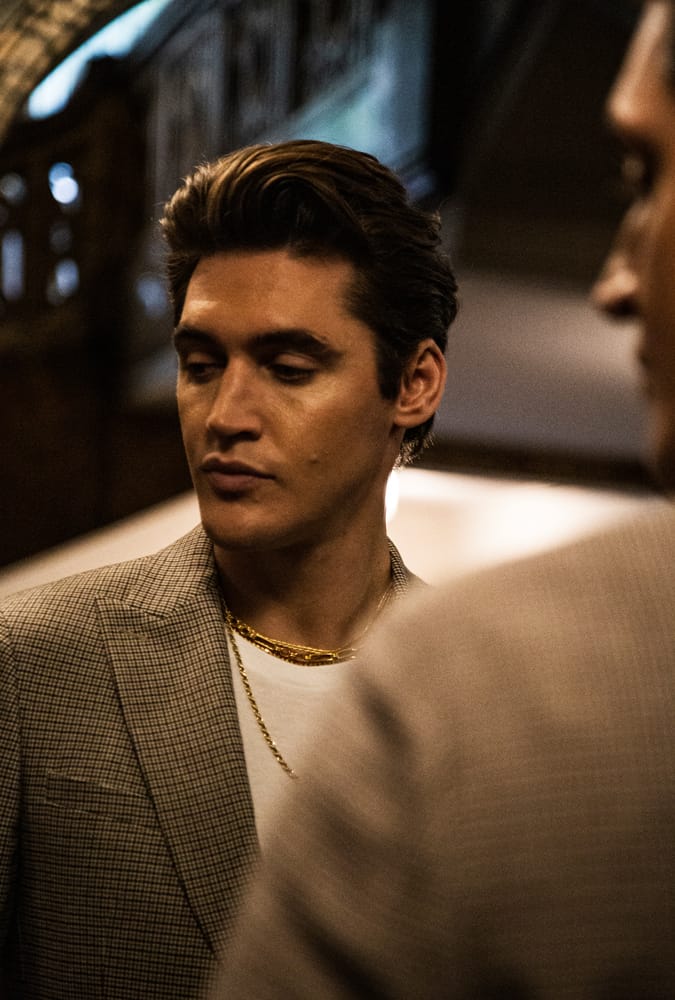 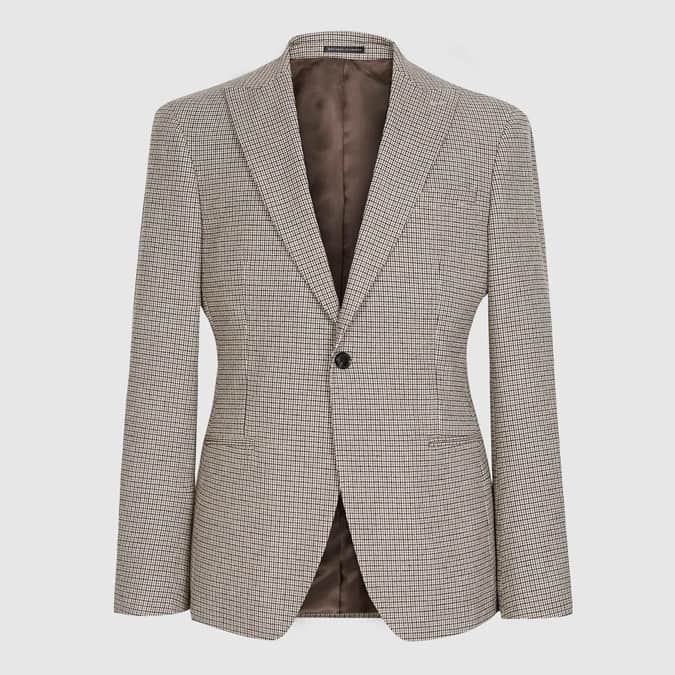 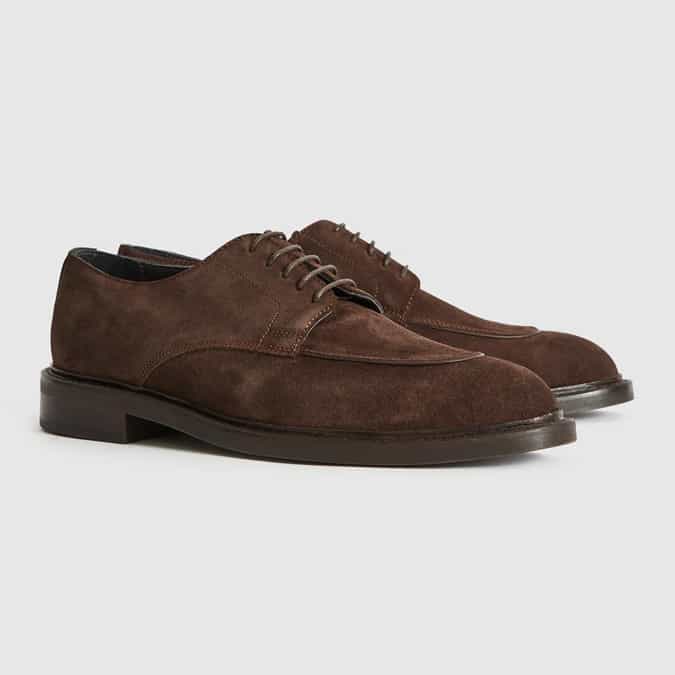 If Carew is going “out out”, then he normally gives himself 20 minutes in total to get ready. “But I’m always a bit late, so I’d say half an hour.” His skincare regime is “really hot shower”, moisturiser, lip balm. “And that’s it”. Only a fraction of those 20-30 minutes is allocated to the quiff: if there’s one thing he hates, it’s “having perfect hair” (don’t we all), by which he means “styled too pristinely”.

Outside of shoots, he doesn’t even use a hairdryer: he simply “whacks in” some matte paste then pushes it up as high as it’ll go. If he forgets to apply fragrance though then he feels “a bit naked”, like his outfit is incomplete, for the whole night: “Like if you’ve left the iron on, or you forgot your key.”

Stopped in the street for selfies now and again, “especially in central London”, Carew is increasingly recognised in his own right and not, say, “Dua Lipa’s hunky Elvis lookalike boyfriend”, as a Daily Mail headline defined him in relation to his pop star ex. He’s fairly sanguine about “what women have had to put up with for decades”.

More annoying is the presumption that he’s just another pretty face with a sizeable Instagram following who’s written a cookbook when in fact he’s a classically trained, legit chef. (Even more impressively, he’s also dyslexic.) He waits an hour before posting his location on Insta, or a couple of days while he’s on holiday. “Otherwise some people randomly show up. It’s quite strange.” And of course he gets weird DMs on a daily basis. “That’s just life.” 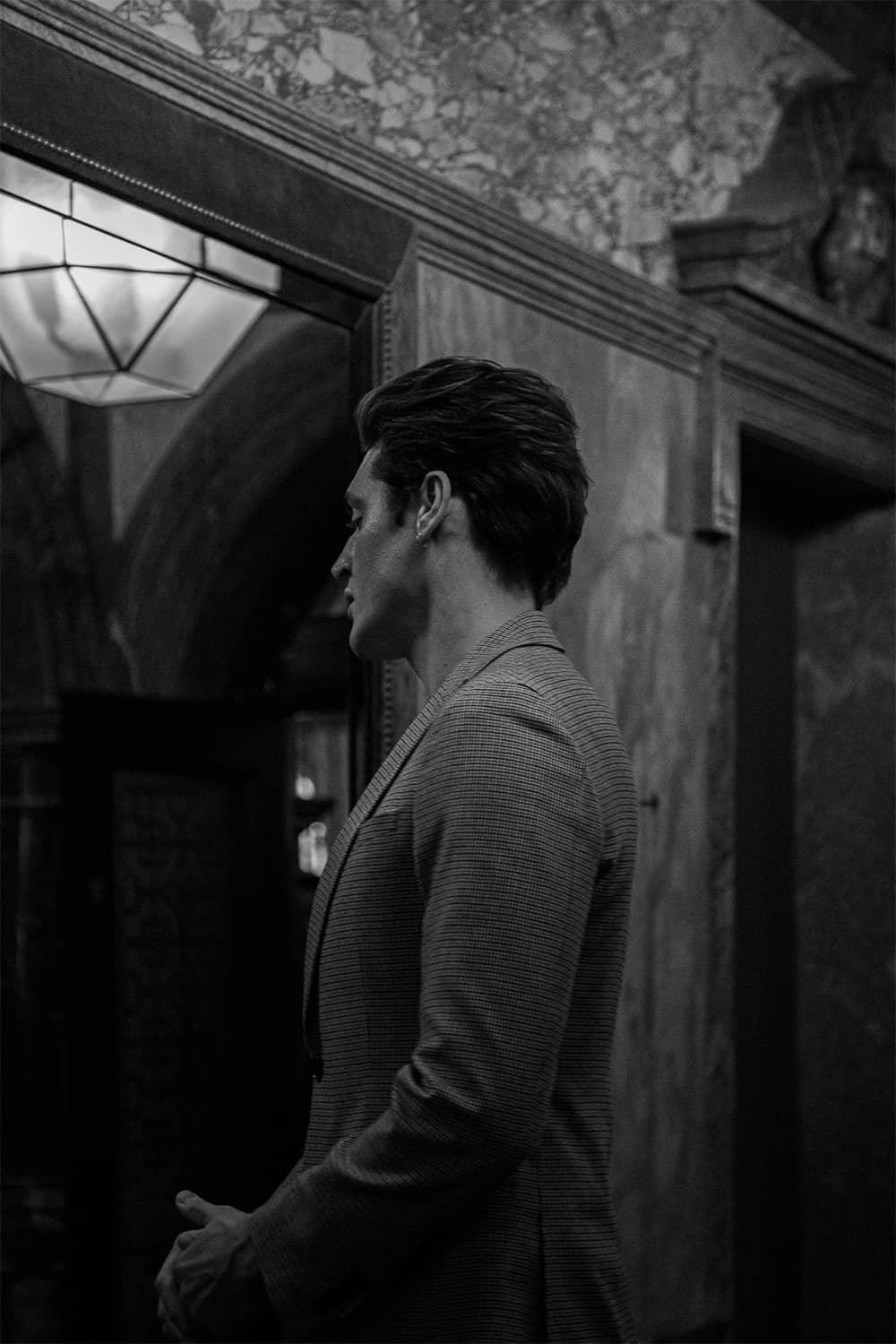 His career has given him ample opportunities to travel and even live abroad, but London is home for Carew, and not just because of family and friends. “There’s just something about this city,” he says. “You can go to the theatre, you can go clubbing…” Not that he really goes clubbing anymore: he’s going to the theatre tonight. If he does go for a drink, it’s to one of the Soho Houses, or maybe someone might take him to a new cocktail bar. “Generally I just like having dinners, you know?”

“So many to choose from. Ducksoup in Soho is amazing. I also just recently went to 10 Heddon Street. The best dish there was this kind of slow pork terrine with what they called ‘apple ketchup.’ The chef Nieves Barrigan has a restaurant called Sabor that’s actually also on Heddon Street. They’re my top ones at the moment.”

“I have to have a Sunday roast. I’d recommend The Rising Sun in Highgate for a nice local pub vibe, and then Blacklock – there’s one in Shoreditch and one in Soho [plus the City]. Apart from my mum’s, obviously, it’s the best roast I’ve ever had in my entire life. Every week I’ve gone, the food’s always good. The cauliflower cheese is banging, the meat is amazing, service is great, they have their own beer that’s really nice and hoppy.” “Lina Stores and Padella are two favourite spots. From Lina Stores you’re going to get the green truffle agnolotti – incredible, in like a butter sauce, loads of truffle and ricotta – and the classic ragu pappardelle. Then from Padella, their nduja fettuccine is amazing, and they also have really good pici cacio e pepe.”

“I hate McDonald’s. If you want a McDonald’s-esque burger, fast food, but still good – better-quality meat, lettuce, tomatoes, pickles –  I’d say Shake Shack. It’s a bit more expensive, but you’re paying for what you get. I absolutely adore Patty & Bun, too. They’ve got a burger with sobrassada, which is a bit like nduja. Where else does a good burger? Bleecker Burger, and they also do these amazing ‘Angry fries’: basically, normal French fries doused in hot sauce, with melted blue cheese.

“Pizza Pilgrims, amazing. Right now, I have a little problem: anything with nduja, I’ll order it. I think they do an nduja pizza there. There’s an amazing pizza place in Queen’s Park, it’s so traditional and so tasty… Let me quickly search for it because I want to give you the name. It’s called Sacro Cuore. Mindblowing. They have a truffle pizza: just the base, the flavour in the actual dough.”