You’d have to have been living under some large and particularly cumbersome rock to have missed the Marmite TV phenomenon of our time: Love Island. And, whichever side of the national divide you found yourself on this summer, it’s impossible to deny the show’s impact. Best known for its endless supply of photogenic contestants (for whom there exists no such thing as a bad angle) the TV show’s wardrobe was mostly modesty-preserving swim shorts and not a lot else. Model Eyal Booker was one of the 2018 season’s quintessential contestants: a mix of starry-eyed optimism, boy-band hair and fitness-model abs that amped up the escapism quota for those of us marooned in pre-Brexit Britain. And, much like his castmates, he spent his duration in the villa clad in swimwear, swimwear and more swimwear. Away from the glare of that Majorcan sun and back on more familiar soil in London, we took the man best known for his gravity-defying mane and megawatt smile and transformed him into a lesser-seen version of himself. We straightened his hair, binned the spray-on jeans and gave him a man-about-town transformation that will be (almost) unrecognisable to his 900,000 Instagram followers. And in between shots, Eyal told us how he achieves those majestic locks, what work goes into keeping the six-pack and what he thinks of those accusations that Love Island has a diversity problem. FashionBeans: How would you describe your personal style?

Eyal Booker: My personal style changes all the time to be honest, it depends what mood I wake up in. It all depends on where I’m going or what I’m doing, if I’m just having a casual day then it’s laid-back street style: a T-shirt, jeans and trainers. But, if I’m off to an event, then I’ll dress things up with some tailored trousers to go more formal.

It’s a cool change to have straight hair for the day, so thanks to the team at Aveda. It’s the perfect fit for the vibe of the shoot. I do think I’ll be sticking with the signature curls on a daily basis though – they are a lot quicker to style in the morning! Your hair is your trademark. How do you keep it looking its best?

Well, it’s all pretty natural, so I suppose it’s good genes: thanks to my mum and dad. I try not to wash it too often though: only when it needs it and I use minimal product because people like to touch curly hair and nobody wants a handful of product. I do often use curl cream, it’s pretty simple but it does the job. Then I’ll add some anti-frizz leave-in conditioner then just let my hair dry naturally.

What’s your routine for getting ready in the morning?

I get ready pretty quickly in the morning because I really like my sleep, so it doesn’t take me too long. The longest part of it is actually choosing something to wear for the day. My hair’s pretty easy to do, I just let it dry naturally so, I spend about fifteen minutes choosing and mixing what I’m going to wear: all simple and quick. What about your grooming regime?

I use manuka honey face scrub every now and again and I use aloe vera gel to moisturise. Besides that I like to have a bit of stubble, so will just run a pair of clippers through my facial hair to keep that neat.

You’re a professional model by trade. What are your top tips for looking good in a photograph?

Learn which angle works best for you, whether that’s straight on or to one side and lean into the shot slightly, keeping your chin down rather than lifting your head to the camera. 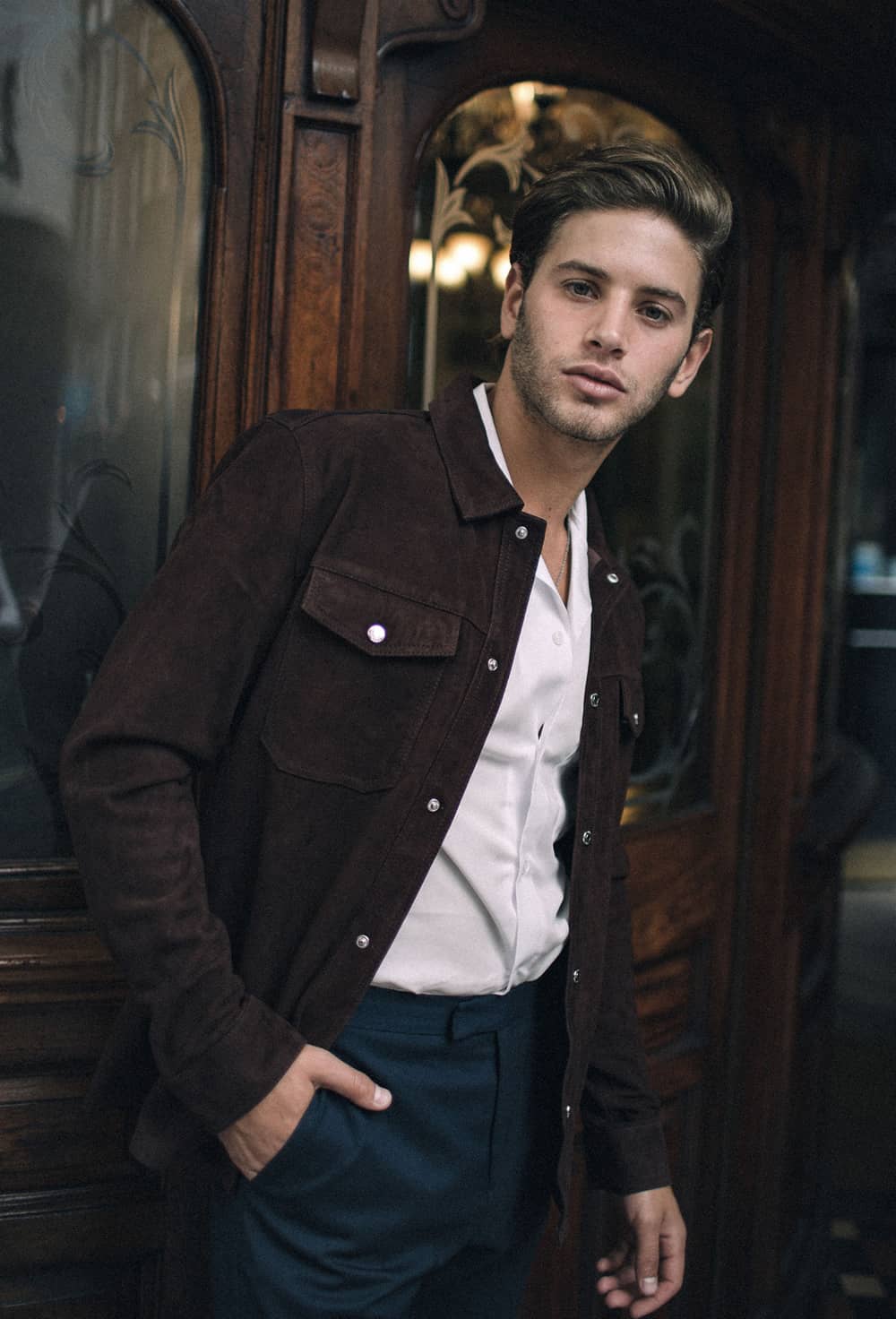 Who is your personal style hero?

That’s a difficult one. There’s no one person, I think it really depends what day it is: I don’t have one set style. I really like the style of David Gandy though. He wears tailoring so well, and that’s something I’d like to get more into at some point.

Excluding yourself, whose style did you admire in the Love Island villa?

On balance, I think Jack [Fincham]. Jack has his typical South London style and I like that, he’s always wearing a sick pair of shoes and he loves a good shirt with tailored shorts and I think on the right person that works really, really well.

What is your go-to look for a night out?

My go-to look for a night out would be a pair of cropped trousers with a simple T-shirt either tucked in or out, although I’m a fan of a free-flowing shirt with a few buttons undone at the moment. What is the one item of clothing that you wear the most?

Probably a denim jacket: I love a good denim jacket, although I haven’t really been able to get into one in a while as it’s been too hot recently.

Which menswear trends are you currently into? 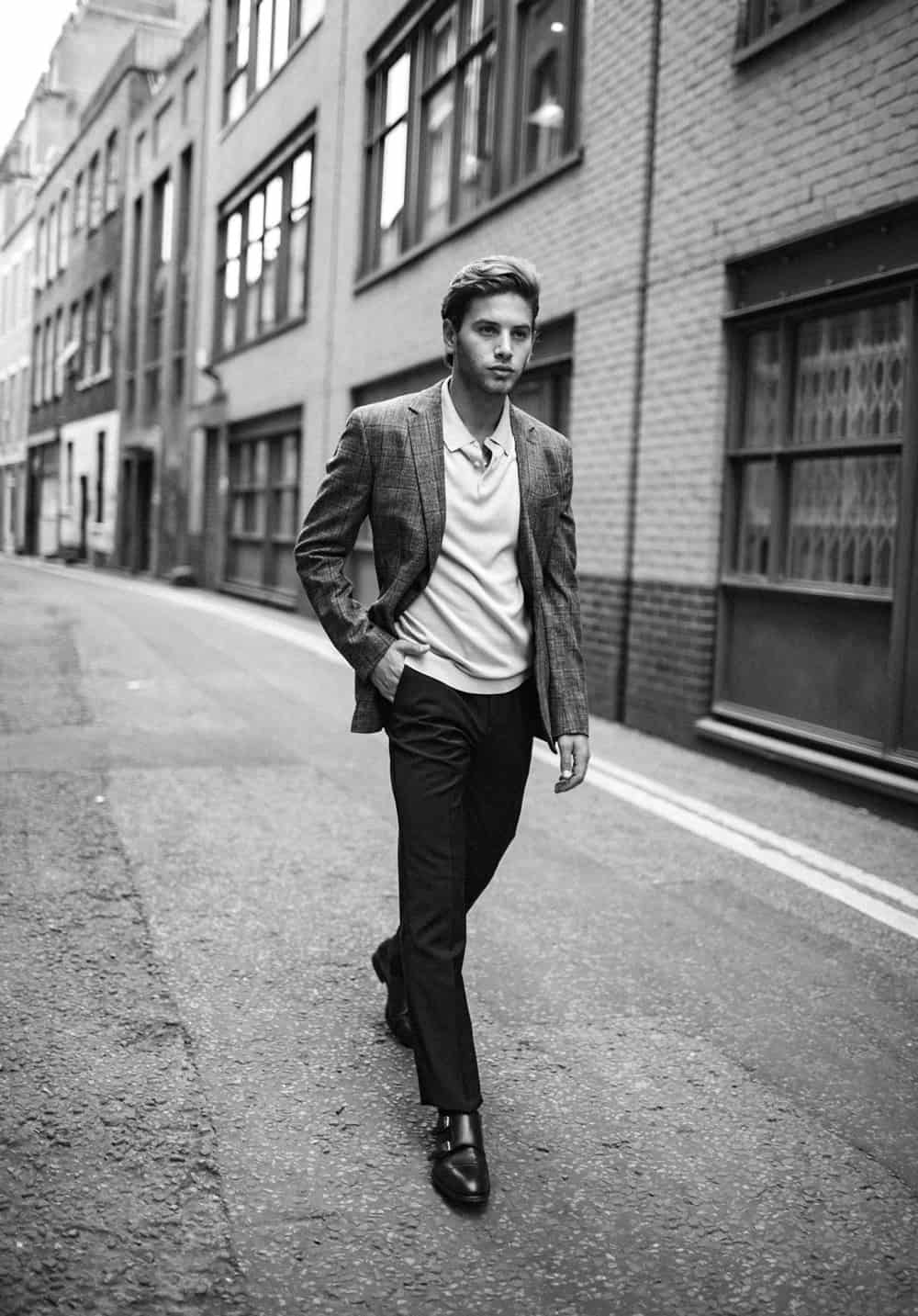 What is your fitness regime, how do you stay in good shape?

My fitness regime has slowed down slightly now my lifestyle is so crazy but I like to do a class called F45 which is a high intensity circuit-based workout that combines cardio and weight training. It’s 45 minutes of pushing yourself to the limit, then you’re done.

Love Island has been criticised for not showing enough diversity. What’s your take on that?

I think that there has been quite a bit of diversity on Love Island, however I do understand that in terms of body image everyone had what would be widely considered to be a good body in there. This was the result of everyone inside the villa leading a quite healthy, active lifestyle to maintain that though, which I think is quite a positive thing. I think there were a quite a lot of different body shapes and heights too, which goes to show that anyone can work on getting into a healthy shape for them. What does the future hold for Eyal Booker?

I’m currently filming a new TV show, Celebs Go Dating, but eventually I’d like to go into documentary-making of some kind, which appeals to millennials specifically. I would also like to get into lots of charity work and continue with my modelling. You can follow Eyal Booker on Instagram —

Get Eyal’s Look: The Grey Suit Get Eyal’s Look: The Suede Jacket