The Complete Guide To Mod Fashion

Nowhere in Absolute Beginners is the word “mod” mentioned, but MacInnes’ Dean Swift embodies the ethos, from the look (sharp, clean, outward-looking), to the milieu (the jazz clubs and coffee shops of late ‘50s Soho), to the attitude (aspirational, smart, in-the-know). But what’s also striking about MacInnes’ anatomisation of Swift’s outfit is that, over half a century on, it still feels very, well, modern. Despite being some half a century old, mod style is very much relevant today.

What Is Mod Style?

While fellow youth subcultures – the teddy boys, the rockers, the punks, the new romantics – have either fallen by the wayside, become a hardcore cult, or dwindled into costume-party irrelevance, the original principles of the mod look are still playing out in men’s fashion. The sharp tailoring, the knitted polos, the jacquard and paisley accents, the Clarks Desert Boots – these are all still stylish pieces that resonate with the man of today.

There’s the brands still flying the flag – Ben Sherman and John Smedley (and their descendants, such as Liam Gallagher’s Pretty Green) as well as the influence of mod-borrowing musical movements like 2-Tone and Britpop.

And let’s not forget contemporary clean-cut modfathers such as Paul Weller, Martin Freeman and Bradley Wiggins, and younger bucks like Miles Kane, Jake Bugg, and The Strypes. So why has mod style retained such traction while the other looks have crashed and burned? It’s all about the clothes themselves. 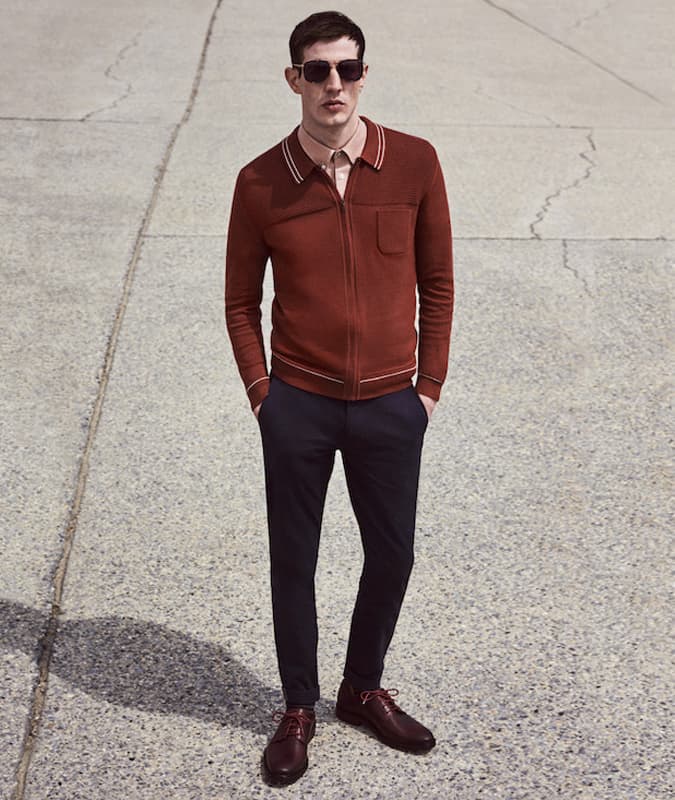 “You’ve got to remember that the word ‘mod’ is derived from ‘modernist’, and that the key thing about the look is that, yes, it’s clean-cut and smart, but that it’s open to all kinds of influences, and it constantly evolves,” says the tailor Mark Powell.

We’re talking in his Soho atelier, just a winklepicker’s throw from Carnaby Street, ground zero of the original mod detonation in the late fifties and early sixties, and Powell is guiding me through his rogue’s gallery of mod-con clients: Paul Weller in a double-breasted grey pinstripe suit, based on a ’60s style; Martin Freeman in an Ivy League-inspired short-jacketed, slim-trousered pinstripe suit; Bradley Wiggins in a velvet double-breasted jacket, accepting his Sports Personality of the Year Award. And here’s Powell himself, looking equal parts Edwardian gent and East End gangster on the set of 1986’s Absolute Beginners – the movie. “Paul, Martin and Bradley are basically following the philosophy of the early mods,” says Powell in his gruff geezer accent. “Men were all wearing suits back in the late fifties, but the mods tweaked the look by taking inspiration from jazz, the Ivy League, and Italian tailoring. Guys like Miles Davis had been through the zoot suits and bebop flamboyance, but then they went the other way, and embraced the preppy, conservative Ivy League look – slim suits, knitwear, loafers – and made it look really contemporary and slick.

“The Italian thing then came in with the boxier jackets and slimmer flat-fronted trousers. It was very aspirational – a way to stand apart from your parents and peers, and to align yourself with this new Britain that embraced immigration, that looked to Europe, with the tailoring and the scooters, and that was starting to break down class distinctions. But the true mod look was never generic; it was always changing, always evolving. “The jazz thing is a good analogy – you have a solid, sharp baseline, but lots of room to improvise on top of that. I would argue that the flamboyant, late-sixties dandy looks of guys like Terence Stamp, Justin de Villeneuve and Lord Lichfield – the crushed velvet, the white suits, the paisley ruffs – were more in the mod spirit than any number of fishtail parka jackets you might see in Quadrophenia.” 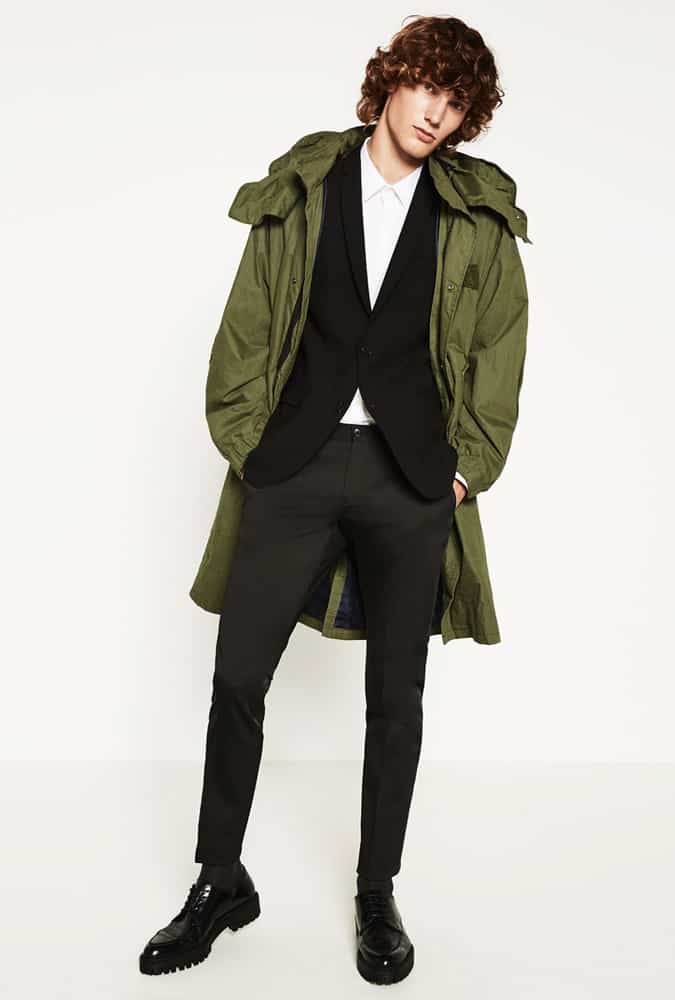 It was Phil Daniels’ Jimmy in the 1979 film of The Who’s mod opera who uttered what might be the movement’s mission statement – “I don’t wanna be the same as everybody else. That’s why I became a mod, see? I mean you gotta be somebody, ain’t ya, or you might as well jump in the sea and drown” – so it was ironic that the movie did much to establish the enduring cliché of mods as scooter-riding, parka-sporting clones.

Any overview of mod worth its salt would have to fold in some essentials: the Harrington jacket (the Baracuta G9 golf jacket, re-christened in honour of Rodney Harrington, Ryan O’Neal’s proto-mod character in the sixties US soap Peyton Place, by John Simons, an early Ivy League adopter who sold the jacket at his legendary mod store in London); the Crombie coat (adopted by the ska-loving suedeheads, part of mod’s extended family); the John Smedley knit polo (a still-smart alternative to a collar and tie, and logo-less, which is crucial to the mod aesthetic); and the Ben Sherman button-down (Sherman built his business by capitalising on the mods’ love of imported Oxford shirt. 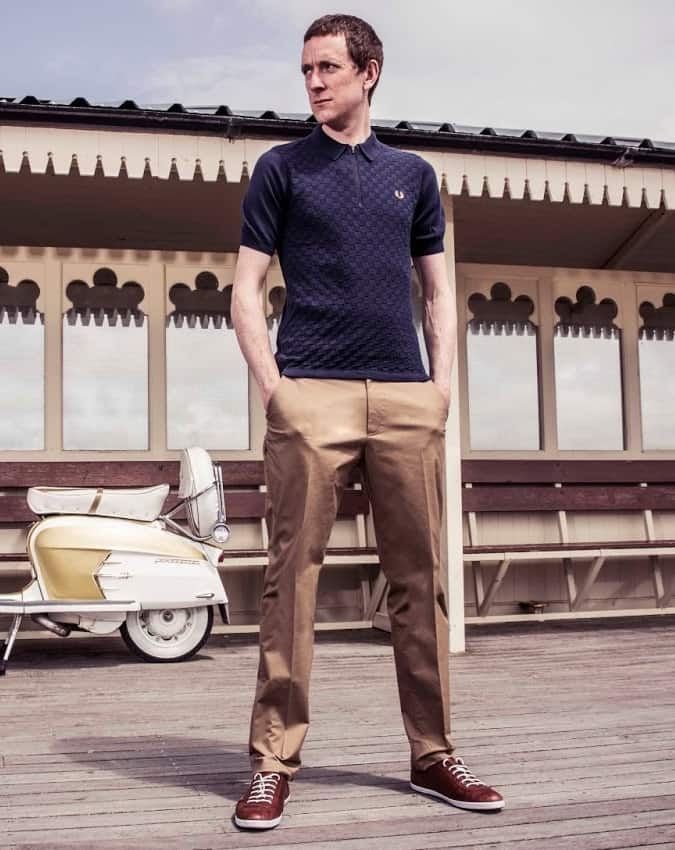 Sherman produced his own, scrupulously sourcing US cloth, in hot-button colours like pink and mint green). “There were only blue-collar or white-collar shirts around at the time, so Ben added the colour, along with stripes, a signature button at the back of the collar, and a back box pleat as his sign-off,” says Mark Williams, creative director of the Ben Sherman brand today.

“It tapped into the original mods’ obsession with detail, one that I think carries on through today. For them it was about getting the latest imported shirt, or shoe, or 7-inch R&B single. Today, it’s still about things like the right cut of suit, working cuff buttons, the way a collar hangs, raised seams, loud linings. For me, as long as you’re reinventing your look whilst paying attention to those sharp and most exacting rules of dressing, then you’re staying true to the mod spirit – even if you wouldn’t necessarily call yourself a mod.” But is the mod look still aspirational even today, when tech titans tend to have wardrobes full of grey marl hoodies and/or navy turtlenecks, and hedge-fund billionaires uniformly sport cashmere crewnecks? “It’ll be around as long as men are into cut, and fit, and detail,” says Powell. “New generations will always pick up on different aspects of the look and reinvigorate it. That’s why the mod aesthetic has endured – it can’t be pinned down to a scooter and a target roundel.”

“Ask yourself, do I stand out from the crowd in my grey hoodie?” says Williams. “Today, the idea of capturing this iconic look and offering it to a mainstream customer is still about all the things that Absolute Beginners was about: living life on your own terms rather than someone else’s; being wiser; looking sharper; digging deeper; and having a mind of your own. I mean, honestly – who wouldn’t want to buy into that?”

The knitted polo may just be the best, and most stylish way, to reference some mod panache in a contemporary look today. When executed with a sharp pattern or stripe, it harks back to the early mods of the late 1950s who turned to the continent for their inspiration – think Dicke Greenleaf in The Talented Mr Ripley and you’re on the right track.

Pair it with some tailored suit trousers – with a short break – penny loafers (the quintessential mod shoe) and some light coloured socks and you’ve got a versatile outfit ready for work or play. Dress it up with a blazer; down with a Harrington or bomber. Speaking of Harringtons, you need one. In the lightweight jacket canon it’s up there with the best – it’s an effortlessly cool piece and, with a tartan lining, is quintessentially mod. Navy or stone would be the obvious choices, but today you can pick one up in a myriad of colours and fabrics including suede or corduroy if you fancy being, well, fancy.

You can wear virtually anything with a Harrington, but for top mod points a button-down Oxford shirt, indigo selvedge denim jeans and Clarks Desert boots are the perfect complements. Keep the jeans slim, tuck the shirt in and roll the hems of the denim to show off those boots, just be careful with them in winter – suede is delicate and the crepe soles get especially slippery when wet. Think of classic mod style and you’ll most likely picture tailoring. And yet it’s so difficult to get right. The typical mod suit would feature a three button front, with slim lapels and fairly structured, roped shoulders. For a more modern (get it?) update though, turn to something more lightly structured, with two buttons and ever so slightly wider lapels. This will be comfier and will look less like a costume. Although keep it slim: “To an extent, all tapered, fitted suits are simply a nod to the mod,” says Ben Sherman’s Mark Williams. “And the more contemporary, the more mod.”

For the rest of the look, turn straight to the sixties. Few shoes finish off a suit quite so well as a pair of sharp Chelsea boots in black leather – ensure the trousers are hemmed high to allow their sleek silhouette to shine. And when it comes to shirting, try a tab collar. It’s a relatively difficult style to pick up these days but you’ll look all the sharper for it and the original mods would appreciate your savvy sourcing. To complete the look a knitted tie is essential – aim for a darker shade than the suit to prove sufficient contrast between the two.