Forget the X-ray glasses and the Rolex Submariner that’s also a circular saw. In James Bond’s wardrobe, the tuxedo has always been his true coat of armor. Which means that when you’re deciding who to cast in the role once Daniel Craig has handed in his license to kill, style is a factor. It has to be.

Bond has always had impeccable taste. He wears Tom Ford and Sunspel. There’s usually an Omega on his wrist. So whoever might step into Craig’s shoes (which are by legendary British shoemaker Crockett & Jones, by the way) following the release of ‘Bond 25′, he’d better know how to dress.

The people most frequently tipped include Tom Hiddleston, James Norton and Idris Elba. But Harry Styles became a surprise contender recently and even David Beckham (admittedly at 500/1) has been mentioned to suit up as the suave secret agent. Whoever comes out on top, it’s clear the producers are on the hunt for the best-dressed Bond yet. So ignore the rumors, forget the bookies, here are the top 12 candidates’ real odds, according to their style credentials.

Codename: The Millennial With The Golden Gun

The latest, and surprisingly not the least likely, name to be thrown into the ring, Harry Styles is fast emerging as a credible replacement for Craig in 2019. The former One Directioner recently proved his acting chops in Christopher Nolan’s World War II drama Dunkirk and already has the backing of Spectre film editor Lee Smith.

Granted, the 24-year-old may have to subdue the more flamboyant side of his wardrobe (floral tailoring is not yet standard-issue for Her Majesty’s Secret Service) but – just like James Bond – he’s renowned for going about business his own way. Seen as the perfect candidate to bring the Bond franchise up to date, don’t bet against the bankable Styles taking on the 007 role, if not now, then some time down the line.

Secret weapon: Since ditching the skinny ties, Styles has made eveningwear his own, with a vast array of Casino Royale-worthy outfits. Codename: The TV Is Not Enough

James Norton has already played a vast sweep of primetime characters on the small screen, from vicar to violent psychopath to refined Russian prince, but it’s his latest role in BBC drama / blatant Bond audition McMafia where his true credentials shine through.

His first scene as smoldering hedge fund manager Alex Godman – son of an exiled Russian mafia boss – sees him step out of a car in a sleek dinner suit, stoking speculation that the role is the actor’s training wheels for a stint as 007. Beyond black tie, his way with a Prince of Wales check and country attire ensures he’d make a highly exportable flagbearer for the very best of British heritage.

Secret weapon: Bone structure that could be used as a close-combat weapon. And seduce a few million cinemagoers in the process. Codename: From Hackney With Love

Although he’s admitted to preferring his martinis stirred, not shaken, it’s never stopped rumors persisting that Idris Elba could be next to inherit a license to kill.

Far more than just signaling the first black agent, Elba would make an ultra-stylish Bond, with a pedigree in sharp dressing honed during stints in Luther and The Wire. An expert in tonal layering and well-cut tailoring, his muscular physique is no stranger to a tux.

Secret weapon: A wardrobe chameleon as accomplished at dressing down as he is up, Elba’s Bond would excel at incognito assignments. We’ve never had a cockney Bond, either. Codename: A View To A Kray

Like Bond himself, Tom Hardy is a complex character packing exceptional style. He’d arguably be the most interesting actor to take on the role, and with roles as not just one but both Kray twins under his belt, he certainly knows his way around British tailoring like few others.

Adding a visceral realness to all his roles, the south Londoner’s wardrobe is as masculine and uncompromising as they come – think standout shearling jackets, tracksuits and three-piece suits that would bring a gangster edge to the franchise. Not to mention his choice of an Omega RAF 1940 in Dunkirk, a very Bond choice if ever we saw one.

Secret weapon: Hardy’s large frame and Marine-trained physique would make him the most hench double-0 to date. 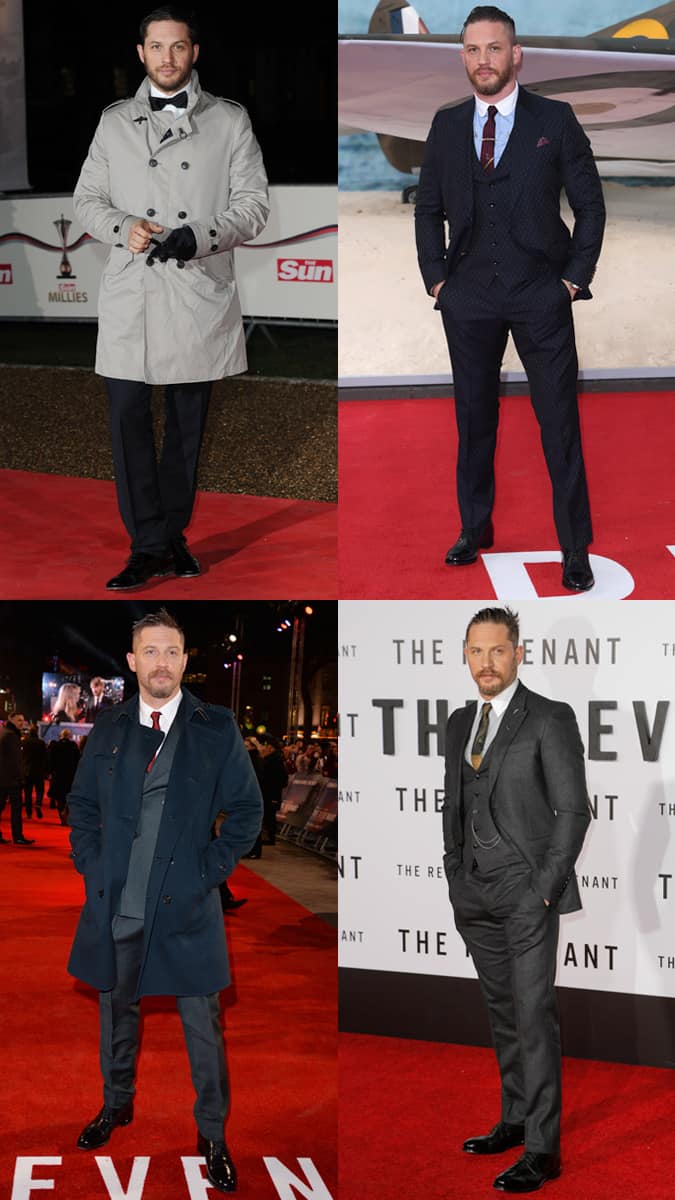 Codename: The Heartthrob Who Loved Me

The swashbuckling lead in BBC drama Poldark may have made his TV breakthrough working topless in the Cornish wilds, but Aidan Turner has also proved himself equally adept at action in The Hobbit franchise, not to mention red-carpet attire.

With Samson-like strength in those luxurious locks, the hirsute Turner has Bond’s magnetism to the opposite sex and – judging by recent appearances on the awards circuit – has even mastered Daniel Craig’s composed, cufflink-checking stance.

Secret weapon: As the face of luxury British label Dunhill, Bond’s bespoke suits and accessories would be a second skin on Turner. Tom Hiddleston might have first hit headlines as Thor’s evil half-brother, Loki, but the crisp-voiced thespian was born to wear a sleek suit. Successive turns in tailoring-heavy roles, including his multi-award-winning performance in The Night Manager, have positioned him high on the list of James Bond contenders, with an ability to pull off everything from pinstripe to polka dot.

Although his fling with Taylor Swift and misjudged vest choices may have blotted his copybook, on looks alone, Hiddleston can go toe-to-toe with anyone.

Secret weapon: His knack for second-to-none sartorialism, good enough to see sign him as the face of its tailoring range. It’s not out of the realms of possibility that Daniel Craig could reprise his role as the most badass Bond to date yet again. After all, before signing on to Bond 25 the actor said he’d rather “slash his wrists” than do another.

If he does, Craig is likely to add to his list of most stylish moments as 007 to date, which has included anything-but-basic basics courtesy of Sunspel, razor-sharp shirts by Turnbull & Asser and those memorable tailored trunks in Casino Royale.

Secret weapon: Over the last four James Bond films, Craig has ditched the one-liners and naff gadgets for serious class and a brand roster to envy. If it ain’t broke… Said to be a favorite of Bond producer Barbara Broccoli, Jack Huston – star of Ben Hur, American Hustle and Boardwalk Empire – is silver-screen royalty with grandfather John, uncle Danny and aunt Angelica having kept the family name in lights for decades.

Despite the family heritage, however, it’s his relative anonymity (compared to others on this list) that is perhaps Huston’s strong suit. Bond has never gone to a full-on A-lister. And with a CV that includes campaigns for iconic Italian brand Tod’s and eyewear firm Oliver Peoples, the 35-year-old has also got the style pedigree to match.

Secret weapon: Having performed most of his own stunts on the set of Ben Hur, Huston’s seemingly not afraid to risk his life (and tailoring) as 007. Michael Fassbender is a Hollywood big-hitter with the charisma, style and screen presence to boss it as Bond. From Magneto to Macbeth, via Steve Jobs and Spartan warriors, Fassbender’s on-screen versatility is matched by a sophisticated, masculine sense of style worthy of any secret agent.

An uncomplicated and unpretentious wardrobe in a typically pared-back palette is indicative of a man more than comfortable in his own skin, making a German-born Bond a serious possibility.

Secret weapon: His ginger beard, an accessory that – with a Facebook fan page all of its own – clearly has a license to thrill. Jamie Bell’s journey from ballet pumps to Bond contender has become a distinct possibility in recent years following a series of standout performances in the likes of Jumper, Nymphomaniac and Fantastic Four. The Billy Elliot star’s turn as an elite SAS soldier in 6 Days proved he can cut it with the big boys and that also goes for his wardrobe, too.

Since landing a gig walking in the Prada menswear show back in 2013, Bell has been snapped in Burberry at the Britannia Awards and seen sitting on the frow at Dior, upping his couture credentials in line with his film roles.

Secret weapon: Experience dancing through the streets of Newcastle will have given Bell the footwork to flummox any henchman. Codename: Too Much Of An Oddjob?

If the brains behind Bond want a name that resonates with the under-25s, Theo James is likely to be high on their to-call list. But the style-savvy British actor is far more than just a teen pin-up, appearing alongside Richard Gere in 2015’s The Benefactor and opposite Jason Isaacs and Amber Heard in the forthcoming London Fields.

Though a love of traditional tailoring, designer stubble and statement outerwear makes him a sartorially strong outside bet for the next Bond, he does lose points for practically never being spotted in a full dinner suit. Though as a fragrance ambassador for Hugo Boss, James could credibly claim to be the best-smelling Bond yet.

Secret weapon: Check out his scene-stealing villain in cop comedy War On Everyone for proof of both big-screen charisma and exemplary tailoring (but still no dinner jacket). 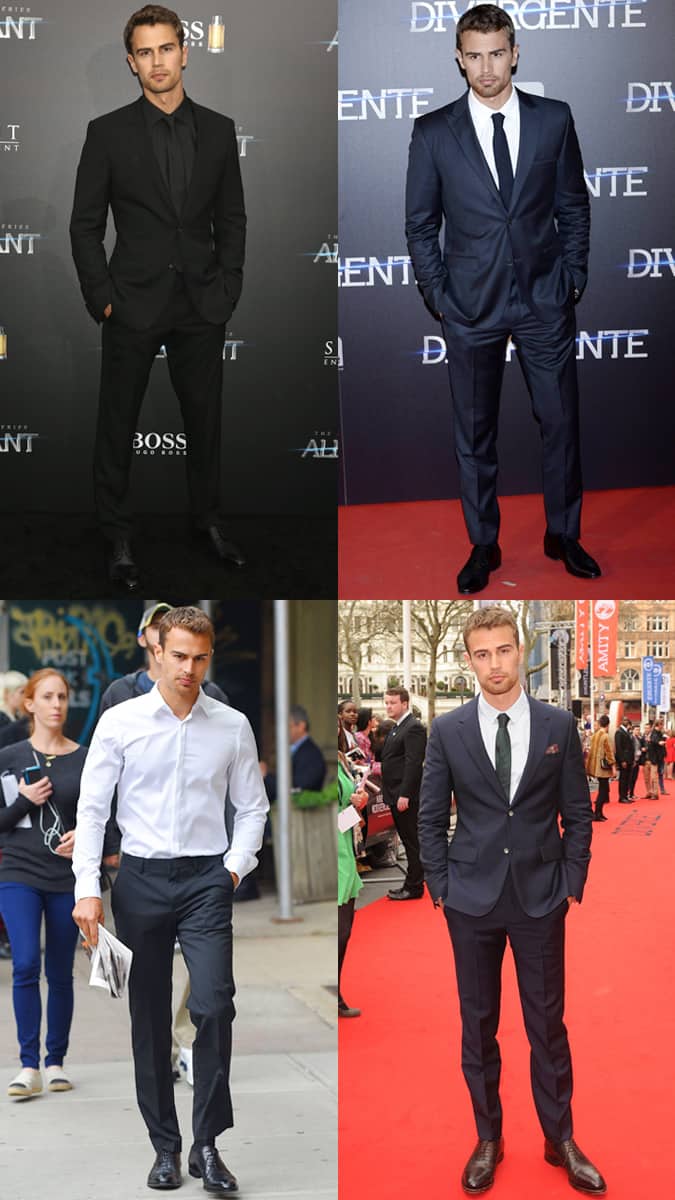 Stop sniggering, David Beckham has excelled at most things he’s touched, so what’s to stop him from becoming the next Bond? He might lack the diction of his predecessors, but if audience size and style credentials were the only factors, he’d be a frontrunner.

Along with a never-ending list of fashion endorsements including his own label Kent & Curwen, Tudor, Armani, Breitling and making him as world-famous as the secret agent himself, he has a history of modeling underwear, so he’d more than ace the Daniel Craig swimwear challenge.

But yeah, we doubt he can act.

Secret weapon: As happy in a sarong as a Savile Row suit, Beckham’s wardrobe versatility guarantees fashion plaudits wherever his Bond assignments took him.

Ben Olsen
Previous articleRevenge Of The Nerds: How Dressing Like A Dork Got Cool
Next articleHow To Wear Cargo Trousers With Surplus Style

Despite a string of big name fashion campaigns, a stint as an underwear designer (and model) and now a role reviving British heritage Kent...