You’ve seen the face, now one of Britain’s most in-demand models spills his style and grooming secrets
Men's Style By Luke Sampson

Those with even a passing interest in men’s style will recognise model Richard Biedul’s face, even if his name doesn’t instantly come to mind: if it’s a menswear tumblr worth its salt you can be certain that Biedul will be featured on it somewhere.

Named by us as one of the most influential male models in the world right now, London-born Biedul has frankly done a heroic amount of work to jettison the Zoolander expectations often levelled at professional clothes horses. His multi-hyphenated CV makes him a true Renaissance man, as busy behind the scenes as he is in front of camera.

Yes, he’s undeniably good at wearing the heck out of clothes for designers, but his involvement in London’s menswear scene has seen him extend his reach in menswear to design, styling, championing home-grown talent and consistently being one of the best dressed men that Britain has to offer.

Here Biedul talks to us about his style and grooming tips, his favourite designers and all the things that have influenced his unmistakable dress sense. 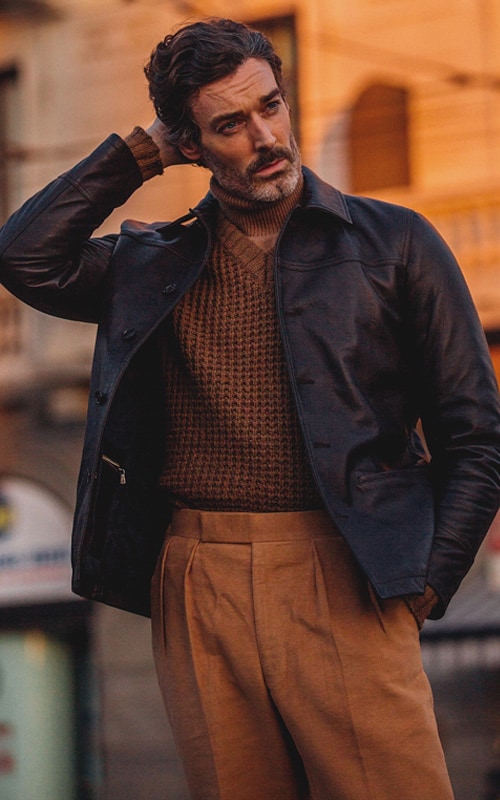 FashionBeans: How would you describe your personal style?

Richard Biedul: I would describe my style as referencing the classics but with a modern twist, that sums it up pretty well I think.

What does a typical day in your life involve?

The funny thing about working in the creative industry is that no one day is ever the same. You never really know what you’ll be doing from day to day. Work options change so quickly and with such frequency that I quite often wake up in one country and go to bed in another. When I’m at home in London and off work, I tend to get up around 7am, walk the dog and then go to the gym. What happens after that is usually something quite mundane. It’s not all glitz and glamour…

Tell us about your career path. Where did it all start?

My career path into the fashion industry wasn’t exactly what you’d call “traditional”. Before modelling I was actually working as a solicitor in London.

I was scouted at a pub outside of the office one evening after work, and to be honest I had never really considered myself “good looking” let alone model material, so it came as a bit of a surprise when it happened. But, before I knew it I was walking down the runway in London, Milan and Paris. Six months later I left my job and moved to New York: the rest as they say is history.

You’ve built your own signature look, but who’s your personal style hero?

That’s easy, my father. From his mohair suits, to his moustache, he was doing everything I’ve done and more before I was even born. What is your go-to day look?

In the current heat, I think we have all had to adopt a far more relaxed attitude dressing. For me, gone are the structured suits, starched shirts and stuffy ties: they’ve been replaced with lightweight tailoring in breathable natural fabrics with an emphasis on comfort rather than formality.

What is your go-to evening look?

Truth be told I don’t really differentiate the way I dress from day to night. I will always tend to err on the side for formality no matter what, it’s such a cliche but it really is always better to be overdressed than underdressed.

What trends are you currently into?

Trends change so rapidly that no sooner have you decided to “be into” one it’s no longer en vogue… so I really try not be trend led in my approach to fashion. That being said, I’m a huge advocate of the louche relaxed tailoring movement that has been so prevalent on runways over the last few seasons. Patrick Grant of E-Tautz is the master of this.

My favourite items of clothing at the moment are my Italian cotton pyjama tops from Budd Shirtmakers: not worn for sleeping in, but as outwear. I tend to couple them with tailored trousers or short shorts.

Which menswear designers are on your radar?

For the last few seasons I’ve really enjoyed watching Alex Mullins, Daniel W Fletcher and John Lawrence Sullivan develop as designers. They are very of-the-moment and encapsulate everything a modern British brand should be. I find the most influential social media channels are those of the fashion editors, stylists and designers. In particular I’d recommend checking out Tom Stubbs (a stylist) and Scott Fraser Simpson (a designer). They’ve cultivated their own unique style that I not only love seeing online, but that have also filtered down into my own style choices. I don’t really have a fixed routine, aside from a hot flannel every morning and evening, but the essential grooming products that I carry in my travel kit are: Mr Natty Hair Paste for my hair, Dior bronze gel and Shiseido men hydro master for my skin, Elemis Anti Fatigue for my eyes, Aesop herbal deodorant to keep fresh and my preferred fragrance is Tom Ford Soliel Blanc.

Between you and I, I also carry Tom Ford brow definer, it’s not a traditional male grooming product but once you start using it you’ll wonder how you ever lived without it. You’ve recently collaborated with young British label King & Tuckfield. Tell us how that came about

Funnily enough, the opportunity to develop this collection actually came about after Stacey Wood (the founder of the brand) read an interview where I was quoted as saying something like: “I don’t do denim”. Stacey reached out to me via social media and wanted to know the reason why I no longer wore denim. She invited me into the studio to see if she could change my mind, and of course, she did.

I stopped wearing denim because the jeans available in the market didn’t reflect my personality nor did they flatter my body shape. Stacey specialises in developing product that is sartorially inspired and uses denim in a way that I’ve never seen before. We quickly realised that we not only shared a passion for classic design but also core values surrounding sustainability and ethics. Within a matter of weeks we had started developing a small denim and knitwear collection for autumn which quickly grew into a second spring summer collection.

Both aim to strike a balance between form and functionality. We really wanted to produce something of a high quality that is aimed at the modern man who needs a uniform but no longer wants or needs to wear a business suit. Which style rules should every man live by?

Style is subjective and as we all know rules are there to be broken. So as long as every man feels good in what they are wearing, I think we should be supportive of their fashion choices.

When was the moment that you found your style?

My style really is an amalgamation of nature and nurture. Simply put, I’m a product of my environment and upbringing. I was born in London and have lived here my whole life, surrounded by some of the most talented tailors and streetwear designers on the planet. I like to think that I’ve cultivated a look that is reflective of this and that is not only unique to me but also to my place of birth.