It is instantly recognisable, ridiculously robust and versatile enough to wear with everything from joggers to dinner jackets. It is the watch every man wishes was in his wardrobe as well as being the watch forum geeks argue over, thanks to its reference numbers and unreliable history.

The Rolex Submariner is one of those watches that you lust after, even if you’re not the type of person to lust after watches. It is comfortably the most iconic diving watch ever made, maybe the most famous watch of all watches. Everyone from James Bond to James Cameron has one on their wrist and it’s said that they never depreciate in value.

Admit it, you want one.

What Makes The Rolex Submariner Great?

At the bottom of this article, you’ll find an exhaustive, nerdy list of all the changes the Submariner has undergone since it first launched, but essentially it is still the same watch. Aesthetically it has remained almost unchanged since the 1950s.

The only thing Rolex has done is slowly incorporate new technologies, such as scratch-resistant ceramic and silicon hairsprings, into the timepiece. It is incredibly hard-wearing and reliable, which is ideal when you’ve got a style that seems to go with everything, and it won’t lose its value. According to an oft-quoted anecdote, Philippe Cousteau, Jacques grandson, told Bloomberg that because everyone in the world understands the value of a Rolex it can be used as “currency” in the event of emergency should you find yourself in the kind of tight spots more associated with the Submariner’s most famous wearer, James Bond.

Before blue-eyed Brosnan defected to Omega, the British spy wore a Submariner. It was his choice in the original Flemming novels and made an appearance in 11 films starting with Sean Connery in Dr No. Just what you need on your wrist when attempting to take down SPECTRE, even if it is just on the Xbox.

It is the quintessential diving watch, with every detail geared towards underwater legibility and reliability. Unidirectional bezel hashed from 0/60 to the 15-minute mark in a colour complementary to that of the dial; crown protected by guards; large round indices in Rolex’s Chromalight, which glows blue and has up to eight hours luminescence.

The options are fairly limited – date or no date; Oystersteel, two-tone or 18ct gold; blue, black or green dial and bezel. But you don’t come to Rolex for unlimited choice, you come because you know you’re buying one of the most enduring designs in horological history.

Where To Buy Vintage Or Pre-Owned Submariners

Getting your hands on a new stainless-steel Submariner is virtually impossible – whether that is because Rolex want to limit supply to maintain hype around its steel models or to dry out the grey market is debatable. What this does mean is that pre-owned is often the way to go.

If you’re considering taking a plunge into the vintage market, then make sure you opt for a reputable dealer. Date- and model-specific details such as the correct hands or coin-edged bezels swapped out for later, larger, knurled ones are so important, you either need to have an encyclopaedic knowledge of the Submariner timeline and its various iterations or be confident that your dealer does. Here are three places you can trust:

Founded by Danny Pizzigoni, who has dedicated the last 15 years to developing his knowledge of vintage Rolexes, and backed up by a team of experts who have experience in watch restoration and luxury retail. Run by Paul Altieri, who bought the site off the eponymous Bob in 2010, Bob’s Watches has a reputation for obsessively policing fakes and having extreme attention to detail when it comes to renovating vintage pieces. 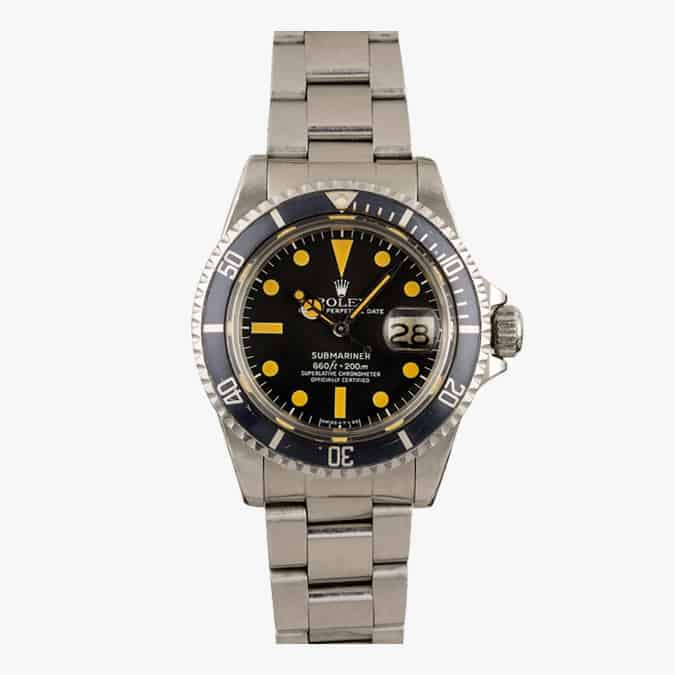 If you fancy a side of adrenalin with your watch purchase, then try an online flutter with this family-run auction house. It runs monthly timed auctions alongside physical ones so you don’t have to wait to make a bid. The Geeky History Of The Submariner’s Most Important Reference Numbers

While some elements of the Rolex Submariner story are murky, we do know where the idea came from – in the 1950s from then-director Rene P Jeanneret. He challenged the team at Rolex HQ to design a diving watch that could also be worn as an elegant timepiece as a way of building on the success of the Oyster, which, in 1926 became the world’s first-ever water-resistance watch.

Because the design is so unchanged since its first appearance, buyers get very detailed and very nerdy about which reference numbers they’re buying and what the subtle differences are between them. These are the most important moments in the Submariner’s history.

In 1953, the Submariner ref. 6204 (reference numbers are very important when talking about vintage Submariners, as you will start to see) was unveiled. The then-pencil hands, thin case and small crown delivered in the style stakes and the world-first 100m water resistance meant you didn’t have to take it off to go in the water.

The original Submariner of 1953

Although there were Subs around in 1953, the official launch was actually in 1954 with the ref. 6205. It too had pencil hands originally, though those were upgraded to Mercedes hands later that year (notice the three-pointed star on the hour hand that looks like the German carmaker’s logo).

The next big Sub launch is the ref. 6200 in 1955. Known in geek circles as the ‘King Sub’, it is considered one of the holy grails for collectors. The back-dated reference number suggests this was made before the 6204 and 6205.

It is chunky, has a 200m water resistance, bigger crown and Rolex Explorer-style 3-6-9 dial. The rumour is that founder Hans Wilsdorf didn’t think people were ready for a watch this hefty so parked it in favour of the previous references.

The Bond Watch (and another one)

Then in 1956 comes the 6536 and 6538. According to Stephen Pulvirent’s exhaustive run-down of Rolex Submariner references on Hodinkee, this was released as a double reference, the 6536 had a smaller crown than the 6538 – 6mm as opposed to 8mm – and was delineated by having 6538 crossed out on the case and 6536 engraved instead. Only a small number of these were produced before it got its own ref. 6536/1.

Using the slimmer calibre 1030 allowed Rolex to ditch the bubbleback cases. The ref. 6536/1 morphed to have the famous red triangle at 0/60 and the hash marks on the bezel between 0/60 and the 15-minute marker. A Rolex Submariner worn by Sean Connery in Goldfinger, 1964

The 6538 is, for many, the Submariner. It has a big crown, but without crown guards – those appear in 1959 – was the one worn by Sean Connery in Dr No, and, just to keep up with the geekery, has two or four lines of text on it “Officially Certified/Chronometer” being the addition for those that were certified.

And now we come to the “55” series, as no Rolex aficionado calls it. First up is the 5510 from 1958. It is the last big crown, has a hash on the bezel but the triangle changes from red to silver and, most importantly, it was the last case without crown guards.

Then there’s the 5512 in 1959 with the first of Rolex’s attempts at crown guards. Not the most elegant of additions, these had very blunt squared-off ends, which were fortunately refined later that year to a more tapered “eagle beak” shape. Other defining characteristics are the 40mm case, bevelled lugs, hash-marked dive bezel and Mercedes hands.

It is instantly recognisable as a Submariner. The crown guards didn’t stay like this, they were modified again to something approaching a point and in between 1959 and 1963 the words “Superlative Chronometer/Officially certified” were added to differentiate between the no-chronometer 5513.

In the late 1960s, the 5512 was also given the first matte dial after Rolex turned over its production from the galvanic gilt dials with their glossy sheen to making these new ones. Eventually the crown guards were changed again to something more rounded (yes, with Submariners this matters. A lot.) And finally, in 1969, the depth notation on the dial was changed to feet first.

This is essentially the 5512 but without a COSC-certified movement that launched in 1962. However, that doesn’t mean there aren’t things about it that get Sub collectors all hot under the collar, such as lines under the words “Submariner” or “Oyster Perpetual” and Swiss written twice, one on top of the other, under the six o’clock marker.

Finally, there’s 1966’s Bart Simpson. Obviously retro named and because the Rolex crown, which varies in shape, size and colour (another differentiation that people get very excited about, but which would warrant an entirely different article) looks rather like the aforementioned cartoon character.

Semi-officially the 5513 in a double reference with the 5517 was the first Mil-Sub (military Submariner). However, watch dealer and author James Dowling discovered that there was British military interest in the Submariner as far back as ref. 6204. Bureaucracy and testing setbacks meant that Rolex’s developments moved faster than the Ministry of Defence, which meant there was an A/6538 issued to the Royal Marines Special Boat Squadron before the 5517. It had 200/600 in red, an Explorer dial, larger bezel with more pronounced ridges for ease of use and big crown for which a Submariner enthusiast would (probably) sell a relative.

This model didn’t last long because it had radium as its luminescent – not great and a bit toxic. So, in 1960 the MoD withdrew all watches containing radium and replaced them with tritium, which is why you’ll see a T in a circle on certain vintage Submariner dials.

If the 5513 sits between the old and new Submariners, it is the 16610 from 1989 that heralds the modern iteration; special mention here must also go to 1969’s 1680 – the first Submariner with date and Cyclops window. The 16610 is the dawn of the five, and then six-digit reference numbers (the third or fourth denoting the bezel and the fourth or fifth the materials used). It was good to 300m and has the chunky lugs and new bracelet style recognisable today.

This was then discontinued and transformed, phoenix-like, into 2010’s 116610; upgraded replicant-style with a Cerachrom bezel, calibre 3135 movement complete with paramagnetic Parachrom Bleu hairspring and Chromalight, Rolex’s lume with a blue-greenish glow to make it more visible.