“Look at this, I’ve got two lads tying my shoelaces. Full on made it, I have.”

It’s been 10 minutes since Sam Fender bounded into The Eagle in west London like a labrador on fizzy sweets. He’s already regaled everyone in the pub about a night out he’d had the week before with comedian Jack Whitehall and six-foot-eight former England footballer Peter Crouch.

“Crouchie was on it, but he kept ruining the vibe, worrying about how angry his missus was going to be.”

The unlikely trio had been on the UK’s biggest talk show, The Graham Norton Show, that evening, with Fender performing his latest and biggest single (to date), Hypersonic Missiles.

Now he’s wriggling around on a pub stool as two stylists try and pin him down and get him in the first look of the shoot. It probably goes with the territory. He’s one of the country’s most talked-about new musicians. No wonder he’s restless. 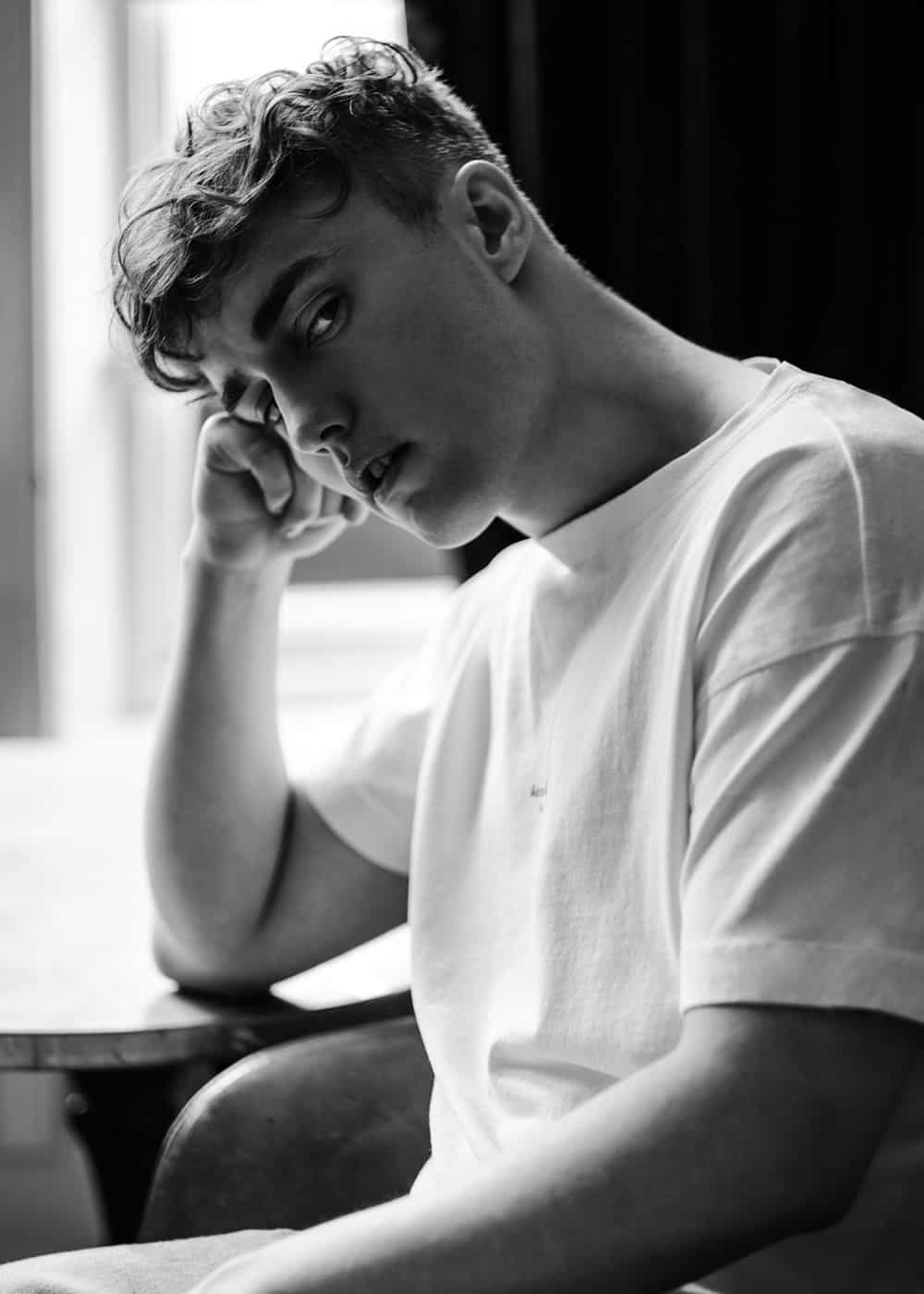 Standing at over six foot, Fender has the broad shoulders of a rugby player, the sculpted cheekbones of a male model and the arm-swinging swagger of a lad-about-town. He’s chatty and friendly, bouncing between topics like a pinball machine, punctuating particular points with a punchy, “Do you know what I mean?”. You can imagine him slinging an arm over you in the smoking area of a gloomy club and asking you how your night’s going.

But within 20 minutes, the livewire has tired. His eyes have started to dim, his shoulders have started to slump. He’s battling a sore throat but also – presumably – the kind of motion sickness that only comes when your career takes off at 100mph.

The past year has seen the 25-year-old put in a monumental shift. Just last November he was playing to 300 at the Omeara nightclub in south London, eventually playing three nights such was the demand. Non-stop touring, a Critics Choice award at the Brit Awards (past winners include Adele and Sam Smith) and down-to-earth, acerbic media appearances have since shot him into mainstream consciousness.

Oh, and the music helps, of course: tight, huge-sounding, heart-on-your-sleeve indie rock yarns inspired by Bruce Springsteen. The lyrics spun are perceptive and relatable, aptly summing up what it’s like to be a 25-year-old man in 2019 looking around in confusion and jadedness at everything around you – social media, reality TV, toxic masculinity, rising suicide rates. In November Fender will play in front of a near 10,000-strong crowd over two nights at Brixton’s O2 Academy and his debut album due to be released in early August is touted to go straight in at the top of the charts.

But the non-stop churn has taken its toll. Just last week, Fender had to pull out of the Isle of Wight festival, a massive fixture on the summer festival calendar, due to illness. Even though we met with him just before the festival season kicked off, Fender could tell something like this was on the horizon.

“I was promised a week off after our last tour, and then we got offered Graham Norton,” he tells me. “We had to take it, but I just didn’t have a week off at all. I’m trying to recover now, but I’ve committed to a week of promo so I’m talking all the time. My voice is shot, but you have to do it with the album around the corner.”

The musician was born in North Shields, about eight miles from Newcastle in the north-east of England, living there for the first 14 years of his life. His mum is a nurse and his dad an electrician, after a stint as a musician playing social clubs in the 1970s. “People just stay there. A lot of people at school just get pushed to go do degrees as a way of getting out. If you don’t, then you’ll just end up stuck there doing an odd job. There’s no industry any more. I didn’t want to be stuck working in a pub for the rest of my life.” He has a brother who is 10 years older than him and whose amp he would have to pay £20 to borrow for his first gigs at a local Turkish restaurant. “They’d pay me 150 quid though which was well mint, but then I’d spend it all on the lash that night”.

When his parents split he moved to a council estate in Chirton, an even smaller town just by Shields, with his mum. “I’m fond of all the places I’ve grown up in. I miss Chirton. I miss the crappy little flat we had.” Fender and his mum have upgraded recently to a new flat in a “nice little street” back in North Shields. It’s one of the first signs of success he’s seen. Some of the others he’s less fond of.

“I’ve had a small taste of being a celebrity, and it’s fucking shit. It’s really vacuous. You suddenly become a commodity instead of a person. A perfect example was someone walking down my street at home last week was just like, ‘Sam Fender can I get a photo with ya?’. I was like, ‘Sorry mate, in a rush’. And he was just like, ‘Fuck off you music shit.’ I giggled and walked off, but later I thought, he wanted a photo with us but doesn’t like our music. He just wanted a photo with us because I’m famous.” In contrast, when it comes to his lyrics, Fender rarely writes about himself. In Hypersonic Missiles he writes about the end of the world under the guise of nuclear missiles, because “it’s sexier” than climate change, which he really thinks will be the end of us.

Other songs, like Poundshop Kardashians and Dead Boys look closer to home. The former takes a swipe at the Geordie Shore types that sprang out of his home town at the beginning of this decade, gym-buffed boys whose muscle-fit shirts have come to define ‘big night out’ style in small towns up and down the UK.

“It’s about the Bigg Market on a Friday night [the name given to the town centre in Newcastle]. Big, plastic Action Men out there looking for action with their spray tans and fighting each other and just being general bellends. And the lasses all look like cheap versions of the Kardashians. Not that there’s owt wrong with it. I’m just ranting on.”

He’s frustrated that the song has been taken out of context by some parts of the media. “It’s only the last sorta twenty years that people have become famous for nowt. It’s the birth of reality TV and social media, you know, creating these ‘public figures’. What the fuck is a public figure? If you’re not harming anybody then that’s fine, but it does make us think, is it possible that this could be having a detrimental effect on you as a kid growing up in this world.”

In Dead Boys, Fender writes about a friend who committed suicide. The North East of England, where Fender calls home, has the highest suicide rate in the whole of England. When asking him about it, Fender takes a turn. His limbs sink into the chair as he squints into the distance.

“Sorry, my mind is fizzing. There’s just a lot going on. I lost a friend, and I was completely unaware that he was ill.”

He snaps back into the room. “I think a lot of people were and I wonder if we weren’t so self-obsessed and vacuous maybe we would start noticing each other’s problems a bit more. That is a genuine concern that I have. I do think we are more self-centred now. I see my reflection and I have to check myself out. I have to. I’m terrified of what people are thinking of me, and I’m ashamed to say that.

“Social media and reality TV is all just serving to promote this self-centredness, which is making people think about themselves more, which probably makes them depressed and more likely to kill themselves in the first place. It’s a vicious cycle with everyone just thinking about themselves. Don’t notice their friends going down and they’re going down themselves at the same time.”

He apologises for the negativity. “I try and consciously remind myself to be a positive person. I love my family and I love my friends, and I don’t like making people unhappy. I don’t like being a big bastard. I don’t like arseholes. I like people to be nice.” 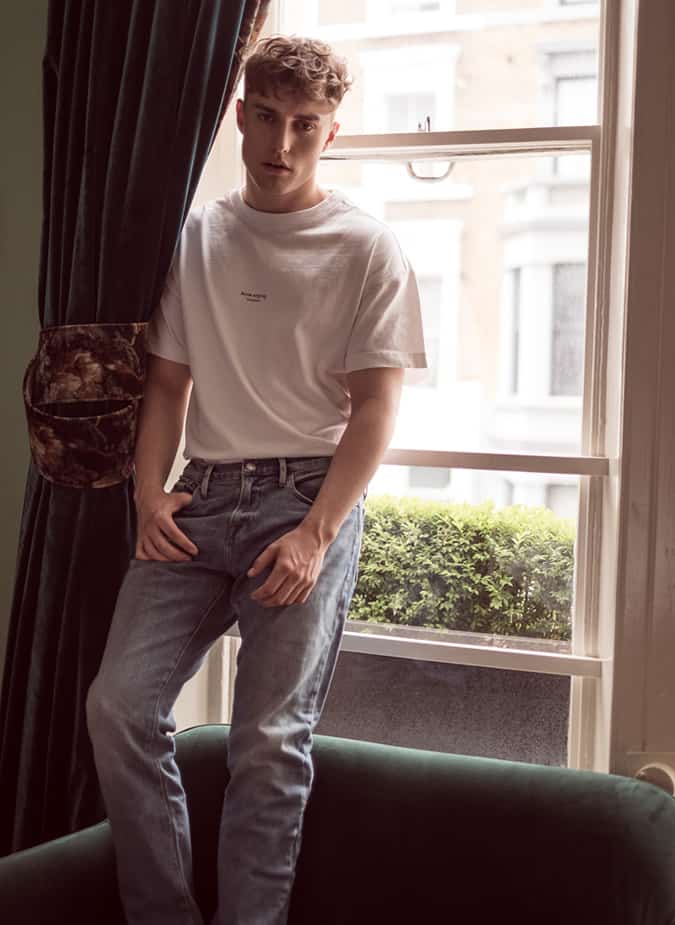 You start to wonder how fame, the full-on fame where you can’t pop to your local corner shop for a pint of milk without a whole Mongol horde of iPhone-wielding celebrity chasers pursuing you down the street, might affect him. On his current trajectory, it might be a real concern sooner rather than later.

His debut album will feature five previously released songs, and seven or eight as yet unreleased. After the festival season, he’s straight into another massive UK tour, and after that Fender wants to get straight back into the studio. It’s what all of this is for – the draining promo work, the endless social media hustle, the smile-and-wave side of fame. At the end of the day, he’s just a Geordie lad with a guitar who wants to play you a tune or two. “I’m getting an ego boost, but it’s got more clout to it than just straight-up vanity, straight-up ‘Ah he’s fit, I’ll give him a like’, do you know what I mean? They like my art, and that’s the best ego-tickling. Not some idiot on the street asking for a photo. When someone comes over to you and says, ‘I really appreciate what you’re doing’, that’s wonderful. Give them a handshake. You know, fucking sound, let’s get a photo too.”

Sam Fender’s debut album Hypersonic Missiles is due out on 9 August 2019.