In part one of our guide to the key prints you should be considering adding to your wardrobe for 2014/15, we explored classic checks and polka dots, along with more contemporary animal-inspired and geometric motifs.

Here, in part two of our round-up, we take a look at two perennial spring/summer pattern trends as well as a couple that are sure to polarise opinion.

Yet no matter whether you’re a timeless and refined dresser or like to make more of a statement, it has never been easier to individualise your warm-weather outfits…

With the Breton t-shirt an all-time classic piece of menswear, stripes should be considered a wardrobe staple rather than a trend. That said, each spring/summer season brings with it a new modern tweak or variation on this timeless motif.

For instance, Moschino took inspiration from nature and the elements for its SS14 collection, which saw garments covered in lightning bolts graphics, sandy desert scenes and images of the high seas. Interestingly, these patterns were split into horizontal panels, giving the appearance of wide block stripes, and applied to key pieces including a blazer, shirt and sweater.

Kenzo was another fashion house that took a unique approach to the trend, utilising block stripe panels complete with a ‘paint brush effect’. In fact, the paint brush pattern itself is almost reminiscent of sporadic, disjointed stripes: Those of you who prefer your stripes in a more traditional guise should look no further than E. Tautz, who applied vertical stripes to trousers, long jackets and even shoes.

Andrea Pompilio, meanwhile, utilised classic horizontal stripes on suits, t-shirts and outerwear, modernising the print through adventurous colour choices. A highlight came in the form of a two-piece suit with all-over stripes in orange and black, while other looks featured a mix of wide and micro stripes within the same item of clothing: As recently highlighted in our London Collections: Men SS15 trend round-up, vertical stripes are set to become extremely prominent in 2015.

Typically coming in bold, thick, contrast forms, the pinstripe was the motif of choice throughout many collections, including respected tailoring houses such as Casely-Hayford, Gieves & Hawkes, E.Tautz, Duchamp and Tiger of Sweden.

Away from London, Gucci were another huge advocate of the vertical stripe, applying thick black and white versions to both tailoring and separates that are designed to get you noticed.

Other key trends include the block stripe, prominent within Dior Homme’s seaside meets city showcase, and traditional horizontal stripes applied to both knitwear and blazers, which were spotted at Emporio Armani, Boglioli, Zegna and Brioni: It’s plain to see that the vertical stripe is set to become a major trend next summer, while SS14’s block stripe trend also looks set to build on its current popularity.

For those that really want to make a statement, keep your eye out for striped jackets, trousers or knits, which were all popular on the SS15 runways.

Remember, you can control the impact of this pattern through your choice of colour palette (muted or tonal stripes are easiest to wear) and the width of the stripe itself:

Camouflage print is a pattern trend that we thought would fall out of fashion quickly, but since its rise to prominence a couple of years ago the industry has continued to back it season after season. Prominent within autumn/winter collections due to its traditionally dark and earthy colour palette, the majority of men will associate the print with functional, outdoor clothing, instantly dismissing its sartorial credentials.

However, for those that like to keep their style subtle and understated, camo print offers an easy way of individualising your look and integrating pattern into your wardrobe without having to resort to making a brash or in your face statement.

Valentino was one designer that opted to use the print in its SS14 collection, applying a muted desert camo to sweatshirts and outerwear that were extremely wearable and could conceivably be worn all year round.

Ami were another staunch supporter, with the pattern offering a stark and masculine contrast to their signature floral motif for SS14. Coming in conventional shades of khaki and green, it was carried on a wide range of items including trousers, polos, backpacks, shirts, coats and tote bags.

Most of these looks were anchored by neutral staples, allowing the print to really take centre stage: Also worth mentioning is the SS14 collection from Lee Roach, who offered a more contemporary take on the print. Like Valentino, Roach utilised a traditional desert camo motif but injected a vivid orange sunset hue throughout, which complemented the beige and khaki base tones perfectly.

Applying the pattern to jackets, slim-fit trousers and accessories, it gave each garment a unique statement feel and proved that even though camouflage is designed to blend into the background, the right colour choice can have you standing out effortlessly: 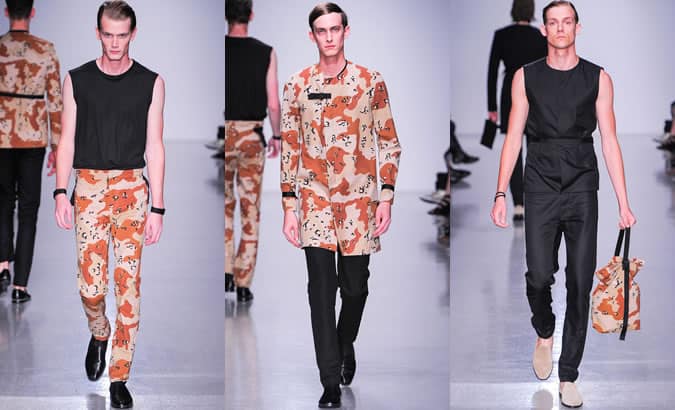 Looking to next year, camo print is set to continue its evolution with the rise of statement iterations.

For instance, Alexander Wang experimented with digital camo prints within his sports luxe collection, applying them to cropped jackets and loose-fit shorts in edgy monochrome and striking yellow colour ways.

Elsewhere, in Milan, DSquared2 produced the most vibrant camo print we have seen to date, utilising bold shades of green, yellow, pink and purple that looked great on swim shorts but became a little overwhelming on larger items like shirts and jackets. Camo print works extremely well on accents such as accessories and footwear, helping bring a touch of rugged masculinity to any ensemble.

Other key pieces to look out for over the next twelve months include those in unconventional colour palettes (such as the blue camo chambray shirt below) or desert camo patterns, which will help bring the motif bang up to date and swerve the negative connotations that traditional camo print can sometimes bring with it, especially when applied to shorts:

Undoubtedly, floral print is one of the biggest and most popular pattern trends for 2014. Already covered in depth by FashionBeans this season, florals have taken a on a slightly darker, more masculine air for SS14, with the print’s stereotypically light and delicate nature replaced by a stronger, edgier and altogether more rebellious aesthetic.

One of the biggest advocates at the SS14 shows was Dries Van Noten, whose entire collection contained a floral element of some description – ranging from floral trousers and blazers to shirts and outerwear.

Epitomising this new dark floral direction, these prints came in brooding black, navy and green palettes. Van Noten did feature some pops of brighter colour, but even these were quite bleached and bleak in their appearance: Gucci showcased several floral two-piece suits, proving that florals can successfully be applied to more formal items of clothing, too. Both single- and double-breasted suits were given the floral treatment, with the collection also demonstrating floral pattern mixing by way of separates.

Looking at the more traditional, tropical end of the floral spectrum, our favourite print came from Ami. Using tropical leaves and flowers in lush yellow, red and green tones, this vibrant summer motif was applied to bomber jackets, trousers, shirts and sweatshirts.

Interestingly, this tropical pattern was often paired with other key motifs already featured, such as camo print, geometrics and stripes: Next year, florals are set to return to their more natural form – namely bold and vibrant. A. Sauvage applied oversized tropical leaf motifs to everything from shorts and tees to cropped bomber jackets, while Topman’s psychedelic showcase saw models sent down the runway in bold daisy print clothing in shades of yellow and pink.

Elsewhere, Brioni incorporated digital floral prints in classic shades of blue, green and burgundy, which were actually extremely refined and wearable. The brand managed to take the more masculine elements of this year’s dark floral trend and give them a statement twist that is perfect for summer: This year is all about dark, muted florals that will slot seamlessly into your capsule wardrobe. However, come SS15 a slightly larger, bolder take will come to the fore – perfect for those that want to stand out from the crowd.

Key pieces to consider include floral bombers, short-sleeved shirts and even printed blazers:

Ombre is defined as ‘having tones of colour that shade into each other, graduating from light to dark’. Sometimes referred to as a gradient dip-dye effect, it’s not one of the singular standout print trends for SS14, but it is a pattern that was prevalent within some high profile collections and enables lovers of colour to effortlessly integrate tonal shades into their wardrobe.

Richard James was one designer who incorporated dip-dye into his collection, with a highlight coming in the form of an eye-catching ombre polo shirt that faded from neon pink to pale lavender.

Adopting a similar approach, Giorgio Armani and Vivienne Westwood applied ombre and dip-dye effects to t-shirts and shirts, which perfectly encapsulate the mood of summer and would be ideal for holidaying or festival season.

But our favourite examples came from Fendi, who utilised a charcoal grey tie-dye pattern that also incorporated shades of white and yellow, as well as a gradient dip-dye which faded from white to bronze. These burnt/charred hues echoed the underlying desert theme that ran throughout the collection: Ombre effects gave way to tie-dye at the SS15 fashion weeks, with Casely-Hayford kicking off proceedings in London with a grown-up take on the pattern. The father and son duo chose to stick to muted colour palettes, combining tie-dye t-shirts with neutral separates to create an altogether refined and subtle statement.

Finally, Bottega Veneta sent bleach effect knitwear down their runways, which gave the appearance of an ombre effect. These came in washed out blue hues and would make an excellent addition to any high summer wardrobe, where they can be layered over vest or tees at night once temperatures drop: 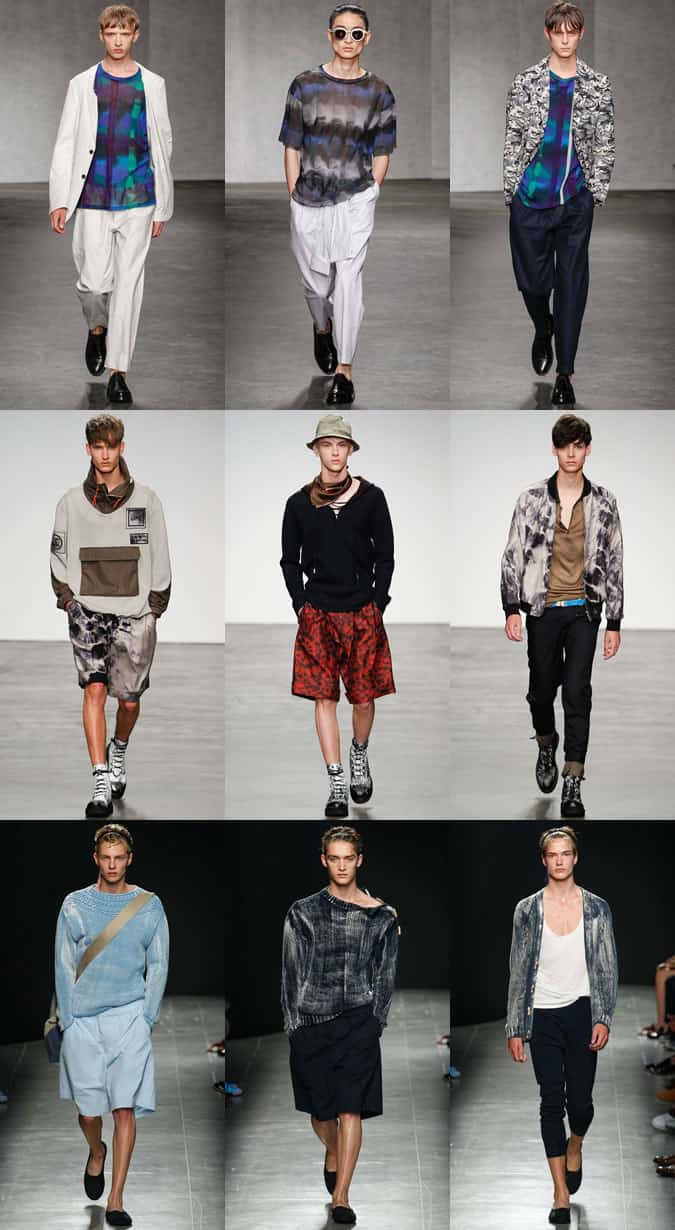 The current market offers a wealth of ombre effect garments, with affordable brands such as ASOS, Topman and Next providing core summer staples like shorts and t-shirts in seasonally-appropriate palettes.

This is a trend that is really only relevant during high summer – and we question its longevity – therefore it’s best not to spend too much. That being said, any of the pieces below would certainly add a unique and individual touch to your current looks:

With prints continuing to dominate menswear, there has never been a better time to add pattern to your summer wardrobe. As you can see, there truly is an option for every type of gent – whether you prefer classic and refined checks or want to make more of a statement with a bold tie-dye tee.

But now we want to hear what you have to say:

How To Dress For Your Height
3