Clarks has teamed up with a London-based pattern specialist to update its classic Desert Boot design. The British shoe manufacturer and high street store has picked up on the rise of print ahead of SS14 to renovate the iconic silhouette.

The source of the unveiled motif is creative consultants PATTERNITY. Started by photographer Anna Murray and product designer Grace Winteringham in 2009, the firm was founded upon the simple idea of using patterns as stimulation for design.

In its five years of operating, the unique online archive has worked with the likes of Apple, the BBC and Levi’s. Such work has led the company to be dubbed one of the ‘Top 10 Most Influential Style Blogs’ by The Daily Telegraph. Wallpaper* Magazine also highlighted the duo’s work in a countdown of the ’20 Best Things On The Web’.

Now applying its business to boots, PATTERNITY has provided a striking geometric print for the SS14 release.

Speaking on the collaboration, PATTERNITY co-founder Murray said: “With Clarks we share not only a passion for detail, but also value the same importance of brand history.”

Inspiration for the print is said to come from architecture, with rectangular and spherical structures of buildings present within the design.

Available in two colour ways, black and white multi, both are produced in a combination of leather and suede.

Each pair is priced at £89 and can be purchased on Clarks.co.uk today. 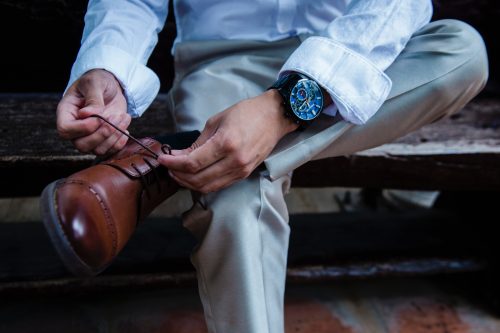