As the weather turns colder, men look to their wardrobes to ensure they’re ready to acclimate to the snowy season. And while clothing can be adapted and layered to work for the colder season, footwear requires a dramatic change. It’s time to say goodbye to sandals and canvas low-tops and hello to warm winter boots from the best boot brands built to withstand the elements.

Whether you’re ready for the cold or not, it does bring an excuse to invest in some of the best men’s boot brands out there. Boots are great for the 9-5 worker, the blue collar fellow, and these brands should be your go-to’s.

Boots from this American brand have been put through their paces over the years, having been worn by families during the US depression and by soldiers across two World Wars.

Today, Red Wing’s legendary worker boots are as strong as ever, providing protection and comfort in refined heritage-inspired styles. 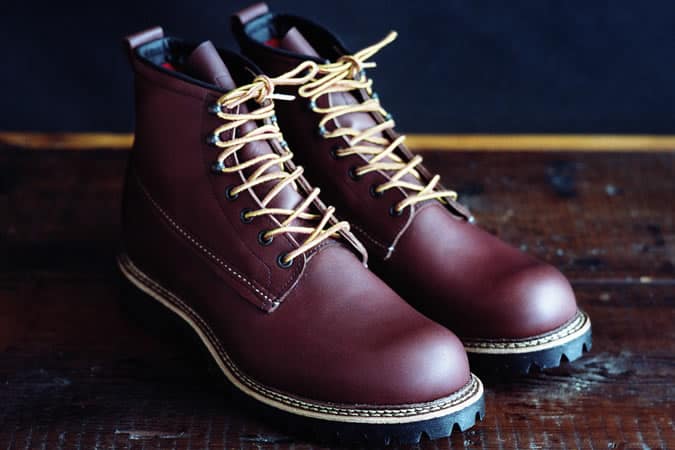 No boot list would be complete without Dr. Martens. Despite first rolling off the production line more than half a century ago, getting adopted by almost every subculture along the way, the label’s iconic 8-eyelet boot, complete with signature air-cushioned sole, has stood the test of time. In 1973, the waterproof, well-crafted Timberland boot we all know today was born. They were so ground-breaking and immediately popular, that they renamed the whole company after them.

The hip-hop movement in the 1990s brought these worker’s boots back into prominence, and today they’re known as a street style staple, while still being coveted by blue collar men.

Established in Australia in 1932, it is the expert craftsmanship and premium materials that keep R.M.Williams boots as relevant as ever in the present day.

The business’ renowned Chelsea boots are coveted by contemporary and classic dressers alike, known for their hard-wearing nature, rugged aesthetic and masculine appeal. A high street name most will recognize, Clarks has been producing high-quality footwear since 1852.

The British retailer’s most popular output is undoubtedly the desert boot, a design inspired by footwear made for British Army officers in Egypt. Clark’s chukka model follows in close second, crafted from soft suede in a simple and unfussy silhouette. Those who have ever been to a festival will have encountered a pair of Hunter boots. The brand’s rubberised Wellington boot is a British icon, having served everyone from the British Army to farm workers and Glastonbury-goers.

Now under the creative direction of Alasdhair Willis, Hunter has entered an exciting new era of contemporary style, but its approach remains true to its heritage, and is still one of the best boot companies in the world. Grenson specializes in Goodyear-welted footwear that is now widely available online, making them more accessible for the everyday guy.

Developed by Grenson’s craftsmen in the factory, rather than the design department, their Triple Welt line features a special sole and welt construction that makes the shoe look like it has three welts of different widths. Yes, the company’s G-TWO line is produced overseas – sacrilege to many traditionalists – but Grenson is still a one of the best boots brands for men, and its Triple Welt series proves it.

Available at grenson.co.uk and END Clothing. British label Belstaff’s heritage is deeply embedded in the motorbiking world, so it’s no surprise that its hero style is the slim-yet-rugged biker model.

Accompanied by expert leather goods and strong celebrity endorsements, the brand’s footwear stays true to its authentic and adventurous spirit, bringing a touch of sleek luxury and elegance to a seemingly rugged world.

Whether you’re a motorbike aficionado or not, you’ll find yourself in good company in a pair of its built-to-last biker boots, which make the perfect match for any dressed-down look. Handmade in Northampton, widely regarded as the home of British shoemaking, since 1829, Tricker’s boots have held onto their authenticity with a tight fist.

The business is still owned by the same founding family and the brand continues to use traditional manufacturing techniques and original lasts, bringing over 180 years of history to every pair. Their specialty are their brogue boots, a style that has kept them as one of the most popular boot brands. Italian label Fracap first created footwear for agricultural use in 1987 before its designs were embraced by both the Navy and Air Force. However, it was 2002 that marked a turning point for the brand, when it switched focus towards more streetwear-inspired designs, bringing in a whole new wave of fans.

Since then, their M120 hiking boots have become a menswear favorite, created in the same Italian factory and distributed to style-conscious gents worldwide. Established in 1873, Church’s has maintained its place as one of the best boot brands with a focus on the intersection of high fashion style with durability and functionality.

Another boot maker specializing in brogue detailing, Church’s boots are made from the finest quality leather with rubber soles, and are great for any smart casual event. You may think UGG boots don’t belong on this list, but you would be wrong. UGG originated in Australia in the 60’s as a boot brand with surfers in mind – UGG boots were designed to keep surfer’s feet warm after a day in the water.

They’ve come a long way since then, and this iconic brand now offers a whole line of high quality boots and shoes made from sheep’s wool and leather. The Neumal style look smart while maintaining the traditional UGG comfort level, making them a favorite among men. The Frye Company originated in 1863 in Massachusetts, and they adopted the Goodyear Welt method in 1923, allowing their sturdy shoes to be resoled again and again.

Frye boots are a heritage brand in the United States, and their stylish, contemporary Chelsea boots and lace-up boots are the highlights of their collection today.

Available at The Frye Company.

Wolverine is a working man’s boot company, and it’s been around on the top of its industry since 1883. They make tough work boots that would be even tougher to destroy. That wasn’t meant to read as a challenge.

Another brand that, like Frye, got its start in 19th-century New England, Alden of New England is characterized by being able to withstand the brutal winters of its namesake.

Their boots are made from rugged leather and are constructed with longevity in mind, something you should look for in the best of the best boots for men. Since 1932, Danner has crafted boots and footwear for the adventurers. “You don’t put on a pair of Danner boots to sit around the house,” claims their website.

Danner boots are built with integrity for the gritty, hard-working, outdoorsy-types. They’ve adopted many different styles of boots since their origin in Portland, Oregon, but their mountain and hiking boots reign supreme. An Australian brand with roots in Hobart, Tasmania, Blundstone has been around crafting the best quality boots for over 150 years, since 1870. Tried and true designs for the working man.

Today, their bestsellers are their Chelsea boots, which come in styles that are more rugged and more professional, depending on your particular needs. Chippewa’s origins lie in Chippewa Falls, Wisconsin, where they got their start as an unassuming boots brand back in 1901. Over 100 years later, the legacy lives on in more contemporary styles.

With designs for working and for outdoor use (hiking, camping), Chippewa Boots have stood the test of time, and remain one of the best boot companies for shoes that will work as hard as you. A newcomer to the boots game on this list, Helm Boots have made a name for themselves fast. Founded in 2009 by Joshua Bingaman, an Oklahoma native, they use old-fashioned methods to ensure their boots are of the highest quality.

Every pair of boots goes through a process involving over 153 steps before they reach your doorstep. Named after Secretariat the horse, Ariat was founded with the premise of becoming “The New Breed of Boot.” They were the first boot company to integrate athletic footwear technology into equestrian boots.

Ariat is best known for their cowboy boots, so any good ol’ boy should have a pair in his closet. They also have a line of hiking boots and Chelsea boots for those less inclined to wear cowboy boots. What are the best cowboy boot brands?

What’s the best brand of boots?

What are the best work boots for men?

Few items of menswear come packaged with as much attitude, heritage or unfiltered masculinity as a leather jacket. Synonymous with punks and pilots, motorcycles...

The Best Hawaiian Shirts To Buy In 2021

The Hawaiian shirt (or Aloha shirt, to use its proper name) has had more resurgences than Tom Selleck has enjoyed Cuban cigars. Since it's...