For autumn/winter 2016, you need to watch your tone, son: specifically, your earth tones. Colours like khaki (which, incidentally, means ‘earth’ in Hindi), olive, sand and clay are ubiquitous, from the runway to the high street and the first promotional shots for the remake of Jumanji. You’ll also want to consult your Dulux chart for sienna, russet and ochre.

In many ways, earth tones are the natural selection for autumn/winter – just take a look at a fallen leaf (which also neatly demonstrates that they all go together). But this season, their omnipresence is being fuelled by some artificial stimulants, such as powerful fashion brands and a certain omnipotent rapper with a God complex.

As part of our commitment to keeping across this season’s key trends, we’ve done some serious spadework to compile a guide to earth tones. Can you dig it? Yes, you can now.

The Fashion Week pack may have sneered at his foray into design, but hate him or love him like he loves himself, there’s no denying the all-pervasive influence of Kanye West.

‘Ye went heavy on the olive green and camouflage for Yeezy season one – otherwise known as autumn/winter 2015 – and the reverberations are still being felt on runways and high streets alike. It’s practically an earth tones-quake, an act of the style god that is Yeezus. (Yes, he is a god; hurry up with his damn croissants.)

Subsequent Yee-sons have doubled down on other earth tones such as brown, rust and even dusty pink (if that can be called an earth tone). They’ve also doubled up.

“Kanye did earth tones in a big way and that’s what has had such an impact,” says Matthew Braun, design manager at River Island. “He also layers similar earth tones, which is partly why he’s become so synonymous with that look.”

And when Kanye speaks, people listen: “He’s much more directly connected to the young male audience than some of the high-end designers might be.” Even though his prices are out of reach of all but the biggest ballers. 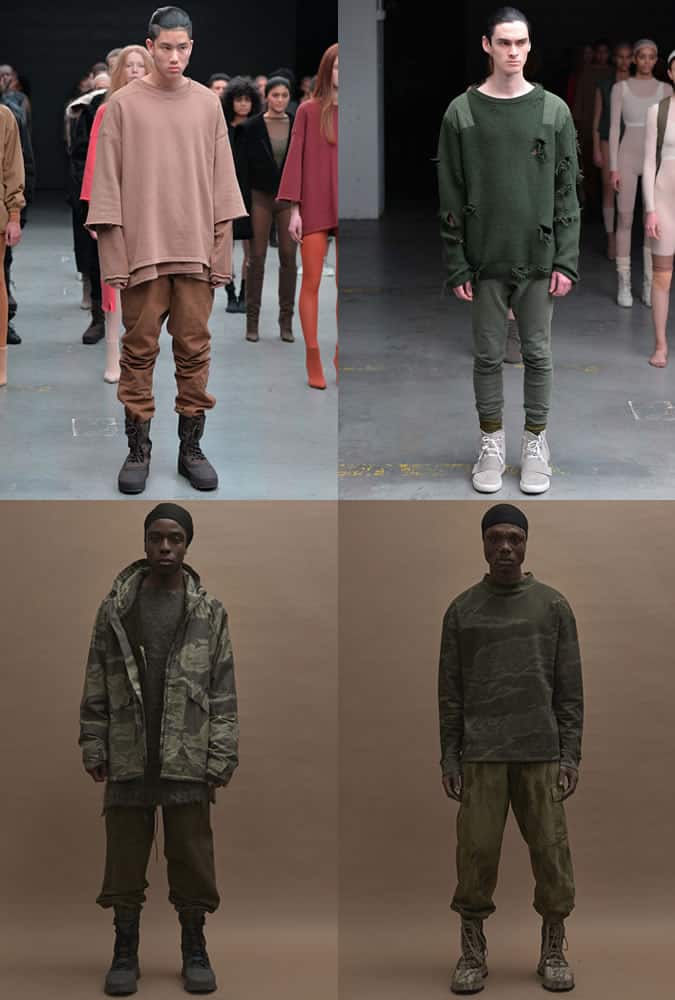 Yeezy isn’t the only show in town that has been pushing earth tones: they’ve been all over London, Milan, Paris and New York.

“Mr West is definitely a big player in the earth tones movement, but it’s part of a wider trend across menswear,” says Braun. “For a few seasons now, earth tones have been coming through on the catwalk, with tobacco and camel tones in particular largely inspired by the recent resurgence of 1970s-inspired looks.”

On that note, Topman Design unveiled velour and overcoats in earth tones, while Burberry interwove knits and track tops among the usual trench coats. Everyone from Canali to Coach via Boglioli and Brunello Cucinelli has entrenched themselves in earth tones. As well as taking earth tones mainstream, Yeezy (the man and the clothing line) has also been a big driver of the whole athleisure bandwagon. So perhaps unsurprisingly, some of the most widespread – and wearable – examples of earth tones are in sportswear.

“Casual pieces are where this all started and earth tones work particularly well in jersey,” says Braun. “A crew-neck sweatshirt or a hoody in sand or stone is a great way to dip your toe into this trend.” Or your torso.

It’s by no means only sweats that are coated in earth tones though. “They look great in outerwear too,” adds Braun. “Our neutral bomber jackets have been hugely popular.”

Earth tone outerwear is obviously much more of a statement, both sartorially and credit card-wise. So if in doubt, start with a tee. Then when you feel more comfortable, maybe layer it under a similarly coloured sweat (see below).

Either way, now is a good time to get comfortable with wearing earth tones as, like Kanye’s career portfolio and ego, they’re only going to get bigger. “They’re also starting to edge into smarter product categories too,” says Braun. “Expect to see a lot of earth-tone tailoring come spring/summer 2017.”

Earth tones are pretty versatile: they all go with each other, and most other things too. But to begin with, you don’t want too big a hole in your pocket. Unless it’s pre-ripped (also see below).

“Start with the staples that you know work for you and try them in a different shade,” says Braun. “So if you love a crew neck sweatshirt, but you’ve already got umpteen shades of grey in your wardrobe, then maybe move onto clay or olive. I touched on the bomber jacket earlier too: it works really well in earth tones as it’s such a utilitarian piece.”

An olive bomber is merely standard issue, of course. But over a military green sweat or tee? on target… 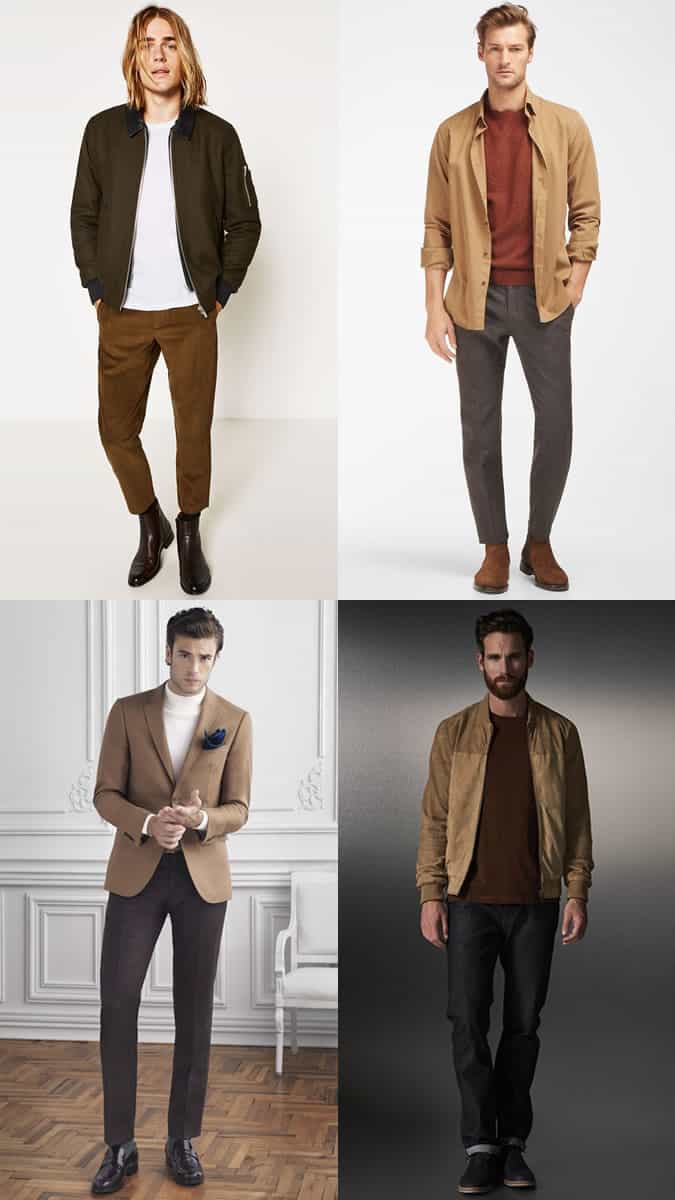 As mentioned at the outset, Kanye has also popularised a sub-trend for layering up similar and even indistinguishable earth tones.

If you want to demonstrate that you’re way above knowing what colours are in, then earth tone-on-tone is a next-level move that’s fairly easily achieved. But there are some pointers to bear in mind. As with any tone-on-tone look, it’s advisable to incorporate some variation in shade and/or texture, so you don’t wind up too one-note.

“You should always ground your outfit with something neutral and clean, otherwise you can start looking a little like an extra from Star Wars,” says Braun. “For example, an earth tone sweat will look great with a pair of black jeans, and perhaps a crisp white trainer.”

If you’re layering olive green, and to a lesser extent khaki, just be conscious of the military connotations. Otherwise you’ll look like you really have been in the wars. Again, this is less likely if you’re sporting sweats and joggers than uni-formal shirt and chinos, or a double-breasted greatcoat (maybe stick a hoody under it).

Retailers are also awash with earth tone items that have been laundered and ripped, for which you can also thank Kanye. Too many holes though and the results can be wholly distressing. Not to mention more than a little Derelicte.

“Keep the distressing to just one piece, and the rest of your outfit clean,” says Braun. “Otherwise you may be venturing back into Ewok territory.” — Will you move heaven and earth to buy into this trend? Or are you getting that dirt off your shoulder? Leave a message on the tones in the comments.