The watch market is so crammed with heritage brands that’ve been around for aeons that it’s rare for a new up-starter to come along and spoil the party. Threatening to do just that is Baume, launched this week by the Richemont group, which also owns Montblanc and Cartier. The modus operandi is high-end luxury at an affordable price point while using sustainable, recycled materials like the cork strap on this sleek and creative timepiece. There are numerous Scandinavian labels going strong at the moment, from Norse Projects to Cheap Monday, but close to the top of the tree has to be Wood Wood. This new capsule collection is meant to tap into fan culture and teenage obsession, but we’re just keen on it for the elegant simplicity and soft cotton fabric. Having enjoyed previous collaborations with Dolce & Gabbana, Gucci and Kenzo, could Mickey Mouse be the most well-connected rodent in fashion? Mickey doesn’t feature personally in this latest collaboration with luxury brand Coach, instead, inspiration is taken from Disney’s Snow White and the Seven Dwarfs and Sleeping Beauty. The results are certainly distinct, as can be seen from the ethereal skull on this wallet. The Superdry SS18 collection takes heavy influence from the music world but luckily it’s not all skinny jeans and loud patterns. Shorts make an appearance in some very bright shades though, including this hyper blue pair which is hemmed at exactly the right place between the mid-thigh and the knee. Graphic designer Leif Podhajsky is well-known in the world of music after producing psychedelic and wondrous album covers for artists such as Bonobo and Tame Impala. However, here he joins forces with upstanding British eyewear manufacturer Cubitts and the results are otherworldly, like zoning out in the hazy summer sun. While you won’t catch us raiding grandad’s wardrobe on the regular there are some styling tips to be had from the old boy. Certainly, the grandad collar shirt is top of that list, with a sharp, crisp look that works for both casual and smart occasions. This cotton version from Mango is one of the best examples we’ve seen recently. You’re probably used to having the Calvin Klein logo emblazoned on your boxer waistbands, but less so on the chest of your shirt. But with the logo-tee trend reaching epidemic proportions, it’s a good way of giving the brand some love while keeping your trousers on. We’re fans of this deep purple version, which offers something a little different in a market crowded with monochrome sets. Inspired by 1960s heart-throb and screen legend Alain Delon (aren’t we all, darling), these new penny loafers are très chic. Made by Duke & Dexter, beloved by celebs including Ryan Reynolds and Eddie Redmayne (who wore a bespoke pair when he won his Oscar), this new summer set of shoes pitches itself as the undisputed champion of the loafer world. 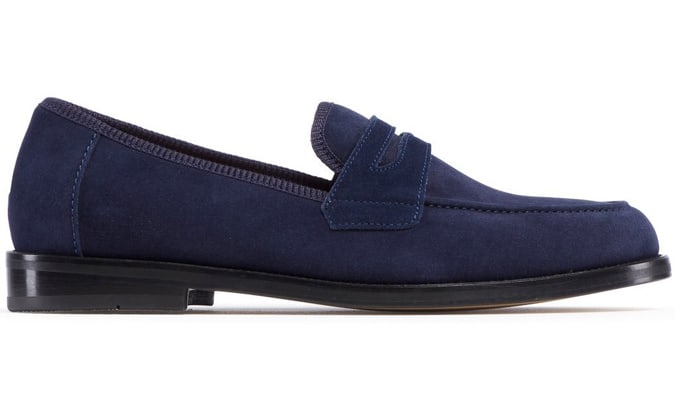 Nothing brings us more joy than a new Uniqlo collaboration, and while our squeals are usually reserved for when JW Anderson comes to play, this time we’re getting hot under the collar over a summer collection with the head honcho at Bottega Veneta, Tomas Maier. Palm trees are the lead motif for the collection, exemplified by this pair of classy and understated swim shorts. This year sees the 50th anniversary of the Puma Suede, which is to Puma what the Gazelle is to Adidas and the Air Max to Nike. To celebrate its illustrious history, Puma has released a series of collaborations and new editions of the shoe – the centrepiece being this classic configuration with sneaker historian and hip-hop DJ Bobbito, which takes inspiration from the Suedes worn on New York basketball courts in the 1970s. If you’re serious about your mechanical watches, then you ought to be serious about your watch winders too. The best in the business is Rapport, which has become the leading UK manufacturer of luxury automatic watch winders. So keep your automatic running with this latest model that resembles a mini amplified speaker, yet promises virtual silence. First, there was ‘millennial pink’, now we have ‘gen-z yellow’, and many brands such as the independent London-based Albam have fallen hard for the colour this summer. It’s a good match with another trending piece for the season, the blouson jacket, which features a shorter cut that sits just above the hip, as well as a two-way zip to change up how you throw it on. The summer nights are approaching and the menswear cognoscenti will be cracking out their Cuban collars in no time, although the weather can be a cruel mistress. Relative newcomer Léon Bara (its first collection was debuted just last year) has got you covered though, with a Cuban collared shirt that’s water-repellent and made from plush Japanese linen so you can continue wearing them come rain or shine. The idea of headphones as fashion accessories snowballed during the earlier part of this decade with Beats by Dre. The market soon became even more high-end, led by luxury headphone makers Master & Dynamic, which has just released a brand new model with on-ear and over-ear pads so you can change your listening preferences on the go. It also boasts a throwback design resembling something a WWII pilot might have had in their cockpit. So while those little busybodies at ASOS have set about filling our wardrobes, they’ve also concocted this limited-edition grooming kit with the best of their face and body products. We’ve done the maths and figured that this set is worth around eight times more if you were to buy all of the products individually, so it’s certainly worth investing in if you want to fill out your bathroom cabinet. One of the most classic footwear styles in menswear, the Derby has stood the test of time largely because of its versatility and ability to work for both smart and casual looks. And yet when it comes to the summer months the traditional leather shoe can be a tad stifling. Fear not though as Ted Baker is here to save the day with its Derby trainers – made from breathable woven cotton, they’re leagues more comfortable and won’t overheat your toes. 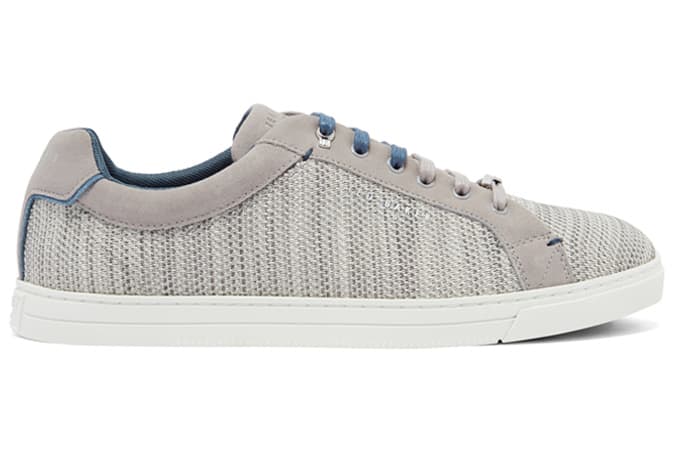 It’s been three whole weeks since the Arcadia group, home to Burton and Topman, launched its new web-only, minimalist menswear brand FoR – and we’re still reeling. The collection has just popped up on ASOS this week, offering yet another opportunity for us to get our hands on some of that top-quality, low-priced gear. One of the key items is this pair of grey trousers, which are bang-on-trend with their soft pleats and slightly cropped hem. Gant knows how to make a good quality jumper, the kind that works well on its own or when paired with a button-down Oxford shirt. The preppy brand is less known for its streetwear sweats however, but it’s a market the US label has got its sights on in its latest partnership with the ultimate sports car endurance race, the 24 Hours of Le Mans. In an eye-catching green and pique structure, this sporty sweat might just catch the attention of the athleisure aficionados out there. Move over camo, to really disguise yourself in the jungle you have to go full-on tropical print. With its lightweight blouson cut, this would be ideal, but be warned, you might stand out a little more when outside of the rainforest. As a result, it’s worn best with toned-down basics such as a black tee, jeans and white trainer combination. River Island’s recent advertising campaigns have had a strong focus on inclusivity – a welcome change in the fashion industry which can often seem homogeneous. The brand’s latest partnership sees it team up with international anti-bullying charity Ditch The Label for eight gender-neutral items of clothing that are designed to empower the LGBTQ+ community and, well, look really cool while doing it. The Peaky Blinders Hairstyle: What To Ask For And How To Style It
2

The Best Sneaker Stores In The World
3