In menswear, classic pieces are often pitched as ‘must own’. The idea being that no wardrobe (and no life) can be considered complete unless you’re in possession of a navy suit, a charcoal overcoat and a pair of dark blue jeans. But fashion is not Pokemon, and your style journey is not about mindlessly collecting pieces to earn the respect of your peers. Unless you’re into Supreme.

Need is, after all, in the wallet of the beholder. All of which is a long-winded way to say that when faced with a choice of smart lace-ups, it’s wise to pick Derbies over Oxfords.

Why? Because these days menswear’s modern default is casual, and the most versatile pieces are those that can do the business dressed up or down. “Oxfords are exclusively a formal shoe that can even go wrong with chinos,” says Luke McDonald, a stylist at men’s personal shopping service Thread. “A Derby is like a Swiss army knife; they’re multifunctional. If you own a pair of jeans and ever want to look remotely smart, you should have a pair. They even work with cords and joggers.”

Put simply, a solid pair of Derbies can slot into near-enough any wardrobe. They’ll let you level-up laid-back looks, and relax stuff that’s smart. They are not essential. But for almost any man, they’re damn useful.

What Is A Derby Shoe?

For those who can’t discern between a Derby and an Oxford shoe (no shame in that), just look at the laces. On an Oxford, the space between the eyelets tab – that’s the strips of leather either side of the tongue, with holes punched through for the laces – will be sewn shut at the bottom; on a Derby, they’ll flap open when the laces are undone.

It’s a subtle difference, but one that speaks volumes. An Oxford is, literally, strait-laced. It’s rigid and formal, smart but safe. Its cousin, the Derby, is open. It’s loose, fun and is happy to slum it with slim jeans or sit beneath a three-piece suit. 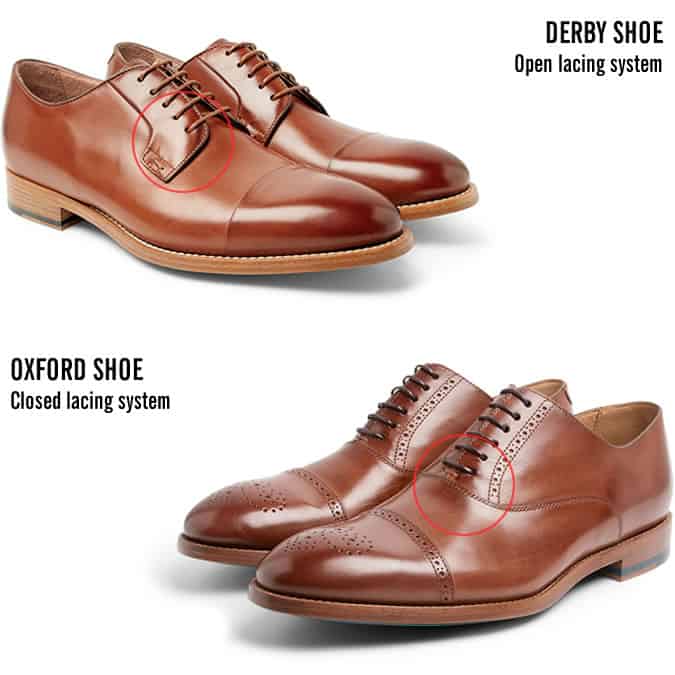 “Banks in the [financial district of London] would often insist on employees wearing Oxfords,” says Tim Little, owner of heritage shoe brand Grenson. “However, the Derby has long since become [acceptable], depending on the materials used and the soles. A black pair with a single, leather sole can be very formal.”

Though its precise origins are murky, some think the Derby was born from the Oxford, its open lacing adopted by wide-footed men, particularly the 14th Earl of Derby, who couldn’t fit comfortably into shoes that were stitched shut.

Others give credit to Prussian general Gebhard Leberecht von Blücher, who noticed that his soldiers couldn’t get their boots off at the end of a day’s march. Legend has it that he designed a version that opened up beneath the ankles, so they were more spacious when unlaced. The name stuck, and in the US, Derbies are still known as Bluchers.

Choosing A Style Of Derby

The history of the Derby carries weight today, particularly when choosing a style to add to your footwear arsenal. “You want something with a vaguely military air,” says McDonald. Delicate Derbies exist, but they’re not worth your time. “They take away from the versatility. You want something with a rounded toe, and they should have a decent sole that’s not too delicate or papery. They should look utilitarian, rather than dandyish.”

It’s also wise to pay attention to tone. Being a less stuffy shoe, designers have done Derbies up in all kinds of colours. “A plain black, chocolate brown or oxblood will match with almost anything,” says McDonald. Being slightly less dressy, a black Derby even goes places black Oxfords won’t; they look great even with lighter washes of denim or tan chinos. Try that trick with smarter shoes, and you’ll look like a car salesman on a night out.

If you’re only going to buy one pair of Derbies and want them to work everywhere, there is a helpful checklist to follow. The uppers should be dark, but not black; bereft of any detail, like broguing or contrast colours. They should also be cut from leather, rather than suede, and have a sole that’s chunkier than an Oxford, but less so than a boot.

Nail these things and the world is your Blucher. There’s rarely a situation in which a Derby is the wrong footwear choice. “We do more Derbies than Oxfords these days,” says Little, whose top-seller is the open-laced Archie style. That’s because menswear is freer now, and the Derby is the shoe that makes the most sense when what we wear for work and play is so fluid.

Being simple and old, Derbies have been adopted by those interested both in practicality and looking good (which is all of us, right?). Helpfully, there’s an option for every man, whether he steers classic or statement. These are the key styles to know. As trainers became more acceptable designers began to explore ways of making smart shoes feel dressed down. “Many have been amplifying the style to create chunky shoes,” says David Morris, shoes buyer at Mr Porter. “Brands such as Ami and Tricker’s have created thick soles with exaggerated proportions, which creates a fun yet rebellious feel.” Most brogues (or wingtips) are Derbies because the informal punched holes lend themselves better to casual styles. Be wary of anything too detailed, as it can make a versatile shoe feel ostentatious. As with their low-profile cousins, Derby boots tend to be more rugged. Think the kind of thing you’d wear to work in a factory, not an office. That said, most men’s boots have an open-laced construction, as otherwise they’re almost impossible to get into. It’s possible to style Derbies pretty much any way you please. But if you’re stuck, this trio of looks will take a single pair from work to weekend to wherever you end up after.

Derbies are an ideal way of making a suit feel less stuffy. The shoe’s extra heft and rugged edge means that while they look great with a standard shirt and tie combination, you can also loosen up without looking like a politician on holiday.

A slim blue two-button suit is the Derby of the tailoring world; it’s still smart, but it also knows where the best afterparties are at, so you can style it in ways that would look awkward in black or charcoal.

At the business-friendly end of the spectrum, Derbies will comfortably book-end a dark block-colour or subtly patterned suit, especially if you pick black smooth leather. If stuck for inspiration with Derbies, think utilitarian. They’re a shoe originally built for marching through mud, so pieces with similar DNA are always going to work.

Few fabrics say hardworking like denim, and that goes for trucker jackets as well as jeans. Trench coats and chinos, which both got their start in the military before being enlisted into civilian life, look great too.

Even in a smart-casual outfit, there’s room for manoeuvre. Suede Derbies will appear more laid-back than leather alternatives, as will anything with a contrast or heavy-duty sole. Anywhere trainers would work, you can wear a Derby (although probably not the gym). They’re more comfortable than Oxfords, courtesy of that looser lacing and chunkier sole, which makes them ideal if you’re tramping around.

Plus, being leather and higher off the pavement, they’re also a far better wet-weather shoe than a pair of box-fresh white kicks. The Best Brands For Derbies

One of Britain’s most storied shoemakers, Tricker’s has been going since 1829. But the firm is far from traditional. Sure, they’ll do you a sleek pair of black Derbies, but you can also get them in handsome pebble-grain leather on a crepe sole. Good shoes don’t have to cost an arm and the leg they’re supposed to go on. Case in point: pretty much anything you can find in the Derbies section of e-tailer ASOS. The king of minimalist kicks recently turned its hand to smarter shoes, too. The result is, unsurprisingly, a minimalist Derby that’s arguably even more versatile than the label’s now-iconic sneakers. Northamptonshire shoemaker Grenson has turned out Derbies since 1875 and it offers a style for every man, whether you fancy a chunky-as-hell triple welt or a sleek work shoe. The British shoeshop’s in-house brand might have a slightly outdated name (‘Ask the Missus’), but if you can avoid anyone seeing the label, its well-made Derbies feel thoroughly modern and punch well above their price tag. The high-street giant does an excellent line in the unexpected. You’ll find oversized soles and interesting leathers, but at a price that lets you dip a toe in something new. A British institution, Marks & Spencer is likely the place you bought your first suit and is also a good spot to find shoes that go with it. Unfussy, well-made and extremely affordable – what else would you expect? There are few other styles that look as good on 1960s punks as every peacock at Pitti Uomo today. The former’s footwear brand of choice, Dr. Martens, is still turning out rebellious Derbies with added attitude decades later. It may have been Prada that spearheaded the move to make formal shoes fun, but proving you can’t improve on a classic, Clarks has been turning out solid examples of Derbies for more than 190 years, complete with its signature crepe sole. Put a British style in Italian hands, and you’ll get a daintier spin on the Derby, which comes with a lived-in look right out of the box. The kind of smart shoes you could wear with a suit, or on the beach. Probably. Each pair of John Lobb shoes goes through 190 steps, a process that doesn’t come cheap. However, for a pair of Derbies that go with everything you already own – and will outlast everything you own – they’re worth the investment. Previous articleHow To Wear Joggers Without Looking Sloppy
Next articleDrop Fade Haircuts – What They Are, And Why You Need One