The Complete Guide To Summer Knitwear

Dickie Greenleaf, eat your heart out
By Luke Sampson

Summer knitwear. At first glance, the two words together may appear oxymoronic, but trust us, they’re really, really not. That’s because in reality – for those in countries with mercurial conditions at least – summer isn’t an idyllic haze of sun-drenched days and scorched grass. The season is more accurately described as a few days of merciful sunshine (usually while you’re at work) followed a few more days of torrential rain (usually while you’re not at work) until autumn arrives.

It’s not just psychotically changeable weather that summer knitwear works for either. There are those evenings abroad that see you outdoors far later than the last remnants of daytime heat. Even if you’re stuck on home soil, you’ll inevitably end up shivering in someone’s garden while mountainous goosebumps replace the limbs formerly known as your arms.

Summer knitwear isn’t just practical either. When wielded correctly it can bestow its wearer with Italian-inflected nonchalance. So, whether you fancy yourself as the next Dickie Greenleaf or are simply looking to introduce a basic knit to the rest of your summer line-up, we’ve rounded up everything you need to know about this underrated summer saviour. The most important aspect of nailing summer knitwear, unsurprisingly, is getting the fabric right. To state a brick-through-a-window obvious fact, you should be looking for a fine gauge knit, nothing chunky or infamous for its insulation qualities, unless, of course shiny and wet are your summer go-tos.

“Merino is incredibly fine and lightweight and is knitted at a fine gauge, giving it a ‘airy’ feeling when worn either layered or next to the skin,” says Stacey Wood, founder of premium British fashion brand King & Tuckfield. “Merino can naturally absorb large quantities of moisture vapour and effectively transfer it (through evaporation) into the air.” As well as merino wool, cotton or linen knits lend themselves naturally to summer as they can be worn as an extra layer without giving you serious sweats.

The chasm between good summer knitwear and bad summer knitwear is epic. Nowhere is this more evident than on the polo shirt. Look for designs which feature an interest weave – namely that’s: waffle, ribbed and open weave textures. While button collars can work well, open and zip collar styles are perfect for adding a bit of menswear nous and making a clear distinction between yourself and Donald Trump taking to the green.

If your knit so much as slightly reminds you of old-school, mid-century menswear, you’re probably on the right path. This is especially true if you’re attempting pattern or tipping detail. “Try breton stripes for high summer, styled on a long sleeve open collar polo and worn with silk linen tailoring,” says Sarah Greig, head of design at British heritage brand Jaeger. “Statement knits are a key layering piece, try a modern version of the timeless classic cricket jumper which has been worn by the likes of Cary Grant and Ralph Lauren.” When styled correctly (ie, not pale pastel, pique and emblazoned with a private joke at the reverse) the polo shirt is undoubtedly the star attraction of the summer knitwear cannon. Whether you go striped, open weave, open collar, button through or long sleeved, keep Jude Law’s turn as Dickie Greenleaf in The Talented Mr Ripley firmly in mind. Wear tucked into tailored trousers and slip into penny loafers to steer the polo far, far away from any suggestion of booze-fuelled mayhem. The knitted T-shirt is one of summer menswear’s little-appreciated treasures. Not only will it offer a more interesting take on the classic T-shirt, it’s the ideal style to have at your disposal for those days where it’s not warm enough for said T-shirt but not cool enough to wear a jacket.

Words of warning. This style generally doesn’t play well with jeans, preferring smarter tailored trousers and minimal sneakers to sit happily between smart and casual. If you want to play it low key design-wise, let the texture or contrast of the weave do the talking here, or go for an alternating or multicolour stripe for something a little bolder. Whereas most variants of summer knitwear are reasonably democratic, the sweater vest is a little harder to wear, despite the fact it’s the very embodiment of utility, slipping on and off with ease. Always look for a V neckline and a medium weight weave; too chunky will look odd during summer, too fine and you’re a miscellaneous cast member from The Big Bang Theory, plus extra fine designs have a nasty habit of revealing buttons and bellies beneath.

Styling wise, it’s best to place a cream, beige or khaki design over a white or grey T-shirt, add sand chinos and some classic white Converse pumps. And just like that, you’re channeling old-school summer nonchalance. If you thought that long sleeve jumpers could be safely put into storage all summer long, you’d not only be wrong, but unwise too. A lightweight long sleeve jumper (merino wool or cotton) is invaluable not just for keeping unseasonal chills far away, there’s the added benefit of being able to smarten up a shorts and T-shirt combo at a moment’s notice.

To wear well this summer, team a crew-neck lightweight jumper in a block colour or a Breton stripe design with tailored pleated shorts (black or sand are usually the wisest bets) and finish with some leather crossover sandals (here in black or tan). Then discard and wear again as the weather dictates. 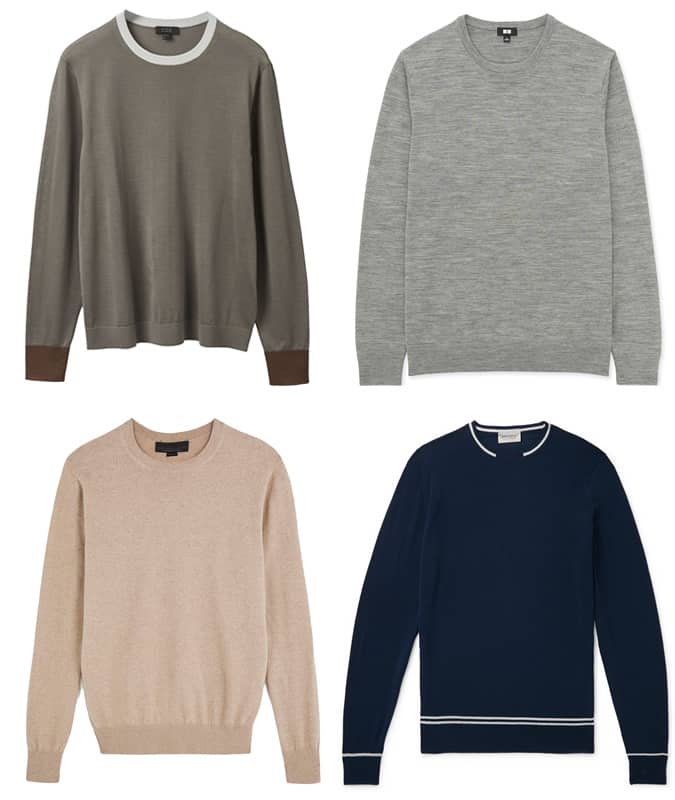 The cardigan can probably be filed under ‘things you never thought you’d find on a summer knitwear list’ but in a surprise to us too, it’s one of those things that you should give some serious thought to. That’s because, when crafted from light merino or cotton, the summer cardigan assumes the role of a thicker shirt rather than a piece of hardcore knitwear.

The best examples of the summer cardigan riff on the mid-century menswear. Think piping, tipping detail and vertical stripes. Collared designs are usually easier to pull off than V-necks and are less likely to make you feel far older than your years, though you can still attempt the latter. Wearing is a breeze too. Start with a neutral T-shirt (black, grey, white) add some slightly cropped tailored trousers (in navy, black or sand) then wear your design of choice on top as and when the weather dictates. Vintage Sports Clothing: How To Wear The Retro Trend
2

The Best Romantic Movies Ever Made
3

The Best Beach Outfits To Wear This Summer