The Biggest Menswear Brands Of 2020

If you found yourself gazing down at your mid-wash jeans and chunky trainers after the turn of the new year and worrying that maybe, just maybe menswear was beginning to get a little stale again, allow us to put your mind at ease: it’s not.

Far from it in fact, because 2019 promises to be a year of change in the world of men’s fashion. High-profile label hookups, industry shakeups, and a focus on sustainability are just some of the events expected to rattle menswear’s Richter scale for the next 12 months, and it’s all coming courtesy of brands old and new, big and small.

These are the brands that will turn your head in 2019, igniting trends, change and quite probably a purchase or two.

News in October that fashion-week favourite Christopher Raeburn would be taking the reins at American lifestyle brand Timberland may have come as a surprise to some, but for others it made perfect sense. Here were a label and a designer, both with a strong focus on eco-friendly production and purposeful design, both eager to take things to the next level.

And that’s exactly what we can expect over the course of the next year and beyond. Raeburn has made it clear he has big plans for Timberland, saying he wants to stay true to the brand’s iconic image and ethos, while pushing boundaries to their very limits. Think bleeding edge materials, utilitarian design with a streetwear tinge and clothes you can wear and wear. Excited? Us too. If you’d started talking about your “chest rig” prior to 2018, we might have thought you were describing a particularly complex inhaler invented to keep your asthma under control. Now, however, and thanks in no small part to boundary-pushing fashion label Alyx, we know that you’d be referring to your £400, luxury Italian-made harness bag.

But military-inspired receptacles are merely the tip of a very fashionable iceberg. And while the Matthew Williams-led label has been a quietly disruptive force, growing in the shadows for the past few years – Williams has produced bespoke buckles for Kim Jones at Dior, for example – 2019 promises to be the year it emerges fully and plants its flag on men’s fashion. Warcore, anyone? As one of the most historic and respected fashion houses on earth, Louis Vuitton’s appointment of Off-White founder Virgil Abloh as artistic director last year marked the dawn of a new era in menswear.

The 1st January 2019 was the beginning of Abloh’s first full year at LV. And following a debut collection that shook up the fashion status quo, not just in terms of design but also with its efforts to normalise diversity within the industry, this year promises to be a defining one for two of the biggest names in fashion. We’ll also be keeping an eye on Riccardo Tisci and Kim Jones for their first year at Burberry and Dior, respectively. 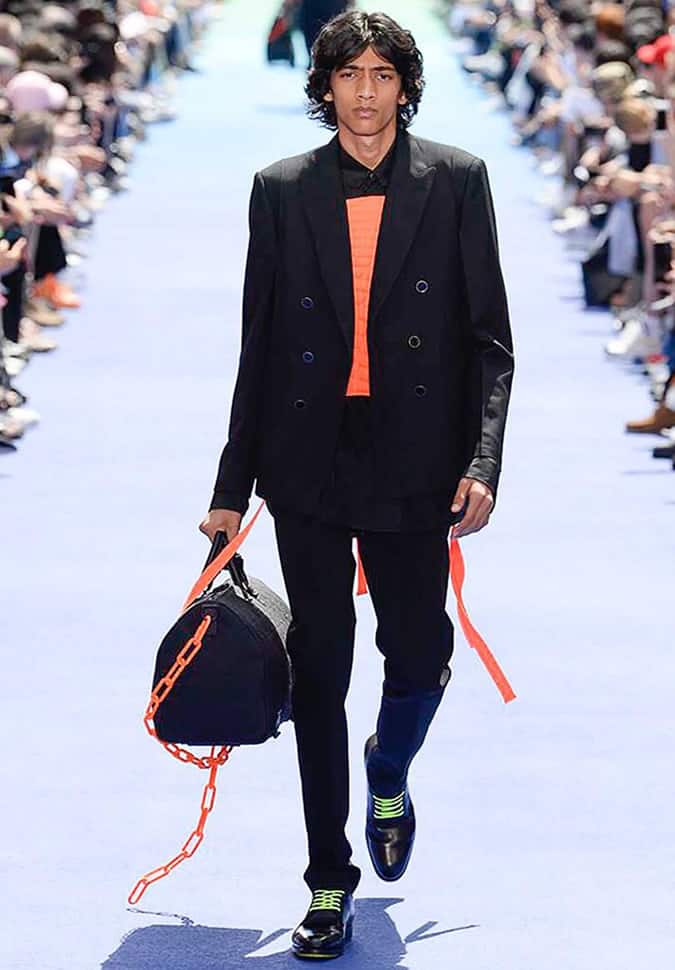 Nobody predicted it, but the must-have sneaker of last summer was an affordable Fila design that appealed to both sexes and was easily picked up on the high street. The Disruptor’s success was the centrepiece in a very good year for the retro Italian sportswear label (now based in South Korea).

Riding the nineties revival all the way to the bank, 2018 saw collaborations with everyone from Fendi to Weekday via Liam Hodges, and that kind of momentum doesn’t stop with a changing of the seasons. Look out for more MVP sportswear, killer collaborations, and don’t rule out a similar streak of good form from Champion or Kappa, either. There was a time when sending models clad in hoodies, tracksuits and bum bags down the runway would have been a maverick move for a haute couture house – something to ruffle the feathers of the high-fashion purists. Today, however, that couldn’t be further from reality. Garments that once served as tabloid fodder for scaring suburban mums have gone from park bench to Paris Fashion Week to Primark, leaving no wardrobe untouched along the way.

This shift in sartorial norms has freed up a position for a new renegade movement in menswear – one that Balenciaga (rarely a brand that does what anyone expects) has been intent on filling with traditional tailoring. Take a look at the suits from the SS19 collection at the Spanish fashion house: boxy at the shoulders still, but otherwise clean, elegant and mostly neutral. The year ahead could well see men’s tailoring clawing its way back from the abyss – and the label responsible is the same one that made dad style a thing. Love it or hate it, the release of the Yeezy Boost 350 back in 2015 gave rise to a new era of sneaker design at Adidas and beyond. Suddenly, oversized sole units, knitted uppers, sock-like fits and uncaged lacing systems were the new normal. All because of the runaway success of one hyped-up release.

Fast forward to 2019 and after flying off the shelves in record time, fetching anywhere up to £1,000 at resale, it’s easy to draw parallels with Nike’s recent Air Fear Of God 1. If that’s anything to go by, 2019 could be an interesting year in terms of new silhouettes from the Swoosh. And if that means an influx of handsome future-meets-retro basketball kicks then quite frankly we’re all for it. You know that monologue that Bane rattled off to Batman in The Dark Knight Rises? “You merely adopted the dark. I was raised by it, moulded by it,” etc etc. Well, you could apply that same concept to Stella McCartney and sustainability.

In the past, McCartney has been ostracised by some of her contemporaries for her unfaltering commitment to sustainable fashion – not least her boycott of leather and fur. Today, the designer still has an insatiable appetite for new materials and new ways of doing things – a recent, rather unsung, achievement was a vegan Stan Smith sneaker in collaboration with Adidas. Now the same people who once scoffed are being forced to follow suit, making McCartney look less like an outsider and more like one of the most important designers of 2019 and beyond. The brainchild of Helly Hansen’s former lead technical designer, Serac is a new Norwegian brand set to shake up outerwear in 2019. Utilising a British Millerain shell fabric, which is the world’s first fully-washable and waterproof 3L waxed cotton, the label is on a mission to bridge the gap between fashion and functionality.

This groundbreaking material is highly technical, yet ages and weathers like leather, making each garment unique to its wearer. And while the collection and production of the garments that make it up are still highly limited – each jacket is currently limited to 100 units which take eight hours each to craft – we predict you’ll be seeing a lot more of this breakthrough brand over the coming years. In 2018, “fast fashion” became a dirty word. And given that’s exactly what Spanish retail juggernaut Zara has made billions by pedalling en masse, it’s no surprise that brand has come under scrutiny.

Two quick factoids for you: 1) Zara is one of the biggest fashion brands of the face of the Earth, selling close to 500 million items a year. And 2) The fashion industry is the second largest polluter in the world, falling only behind the oil sector. This considered, you’d be right to think that Zara has a clear-cut duty when it comes to making clothing eco-friendly, and while last year saw little improvement, those at the helm of the label have assured the world that change is coming.

Zara has pledged to stop sending all of its unused textiles to landfill by 2020. That’s potentially a very big deal, because the brand’s market-leading position means it also has the potential to lead when it comes to world-changing reform in fashion and retail. In late December 2018 it was announced that Belgian tastemaker Raf Simons was leaving as chief creative officer at Calvin Klein. After two years that saw the launch of a new luxury line and creative freedom for the former Dior head honcho across all collections, marketing and advertising, everyone was left asking the same question: what’s next for CK?

Who will replace Raf? Will the label even hire anyone in that capacity at all? Will it ship a 205W39NYC spring collection? Can the brand even function without a luxury arm? Right now it’s anyone’s guess, but 2019 holds intriguing answers. It’s all change for Miami-based Americana brand Perry Ellis. The tail end of 2018 saw the company go private, in a move its owners say puts it in the best possible position to grow. We think that means taking a leaf from the Tommy Hilfiger and Ralph Lauren playbooks, by releasing throwback collections that are frankly far more desirable than its more recent output.

In the short term, however, we have been treated to a revamped collection of streetwear-inflected staples, courtesy of the brand’s ‘America Perry Ellis’ line. Think bleached denim, retro rugby shirts and quarter-zip tops aplenty. To us, it looks like the (re)start of something special and definitely worth keeping an eye on over the coming months. This year marks the 125th anniversary of the legendary heritage outerwear brand and it is celebrating in style. Kicking off with a stellar presentation at London Fashion Week Men’s, Barbour announced a limited edition line of hero jackets inspired by its extensive archives, alongside a collaboration – the Director’s jacket – with fellow north-east legend Sir Ridley Scott.

Few if any brands do technical heritage menswear better, so we’ll be keeping an eye on the birthday boy all year long.