What Exactly Is Boxing Training & Should I Take It Up?

Knock out fat like Anthony Joshua
By Tom Banham

For the past couple of decades, boxing training has come in two flavours: proper gyms where proper men properly hit each other; and fancy gyms where (mostly) women throw air punches with wrist weights. Many guys are understandably wary of rubbing sweaty shoulders with real fighters, but boxercise offers none of its visceral thrill.

But there’s now a third way: gyms that cater to men who want to learn how to fight, but don’t want to get hit in the face (at least, not yet). Their rise is in large part thanks to Anthony Joshua, the homegrown champion, who didn’t pick up gloves until he was 18. “It made guys think that they could do it too,” says Jamie Luis, who runs DW Fitness First’s new SPARR boxing classes. “And that it’s a way to look the way he does, too.”

Rightly so. The the boxer’s transformation, detailed in innumerable montages, is only achievable if you actually train like a boxer. “It’s about the explosive power and coordination of hitting something,” says Luis. Not that you need a butcher’s fridge or set of museum steps. Your gym’s probably already stocked with everything you need for a heavyweight workout.

The Benefits Of Boxing

Still Unconvinced? Here’s how boxing will punch up your normal routine.

Unlike your bench press PB, boxing is functional. “It’s great for total body strength and power as it uses the body from head to foot,” says James Trevorrow, who developed Virgin Active’s new Punch class. That means you’ll build that all-over muscle that makes boxers’ physiques so enviable. And feel the burn in muscles you never knew you had.

Boxers fight for three minutes, then rest for one. “It’s high-intensity training,” says Luis. This spikes your metabolism for huge calorie burn while you’re training, then increased burn even when you’re out of the gym. You’ll knock out body fat even while you’re asleep. Boxing is tough, but an hour in the ring disappears quicker than the same time spent on a treadmill. “It’s fully absorbing,” says Trevorrow, “so the mind won’t go wandering too often.” It’s also perfect stress relief; you can’t hit your boss, but you can take out your full in-tray frustration on a punch bag.

“Boxing isn’t about punching,” says Ryan Pickard, former captain of England’s oldest boxing club, Repton, and founder of 12×3 Gym. “It’s about everything you do before you throw a punch.” Think footwork, mobility and the ability to picture your shot while ducking a fist.

Even if you never hit anything not wrapped in foam rubber, you’ll be faster and more nimble everywhere, from the football pitch to the squat rack. 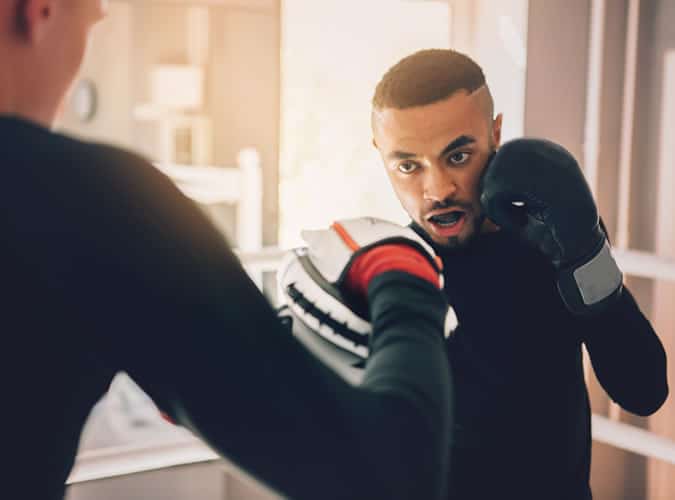 So you wanna be a contender? Before you step into the golden ring, these are the techniques to master.

You can’t sting like a bee until you can move like a butterfly. “Moving properly is the difference between hitting your opponent and being hit,” says Pickard. He should know; he started boxing at seven, won a youth Commonwealth gold and still trains Repton’s juniors. Make this your warm-up before every session, to build quick feet that can get you into range – and out of trouble.

Rocky will teach you a bit about how to box. YouTube will show you more. But if you want to learn the right way to throw a punch, you need an expert to show you. “Once you’ve got the basics, you can work on technique on your own,” says Pickard. “But if you don’t then you’ll just get good at all the wrong things.”

Most boxing gyms run beginner classes, but there are still many where the coaches don’t have time to help you. “At Repton, we have a rule – no fitness boxers,” says Pickard. Which is where his gym comes in. You learn proper technique but without any pressure to step into the ring (although 12×3 does run weekly sparring sessions, in case you get the bug).

SPARR and Punch are also focused on skills, rather than just sweat. “We start with shadow-boxing,” says Luis, “so the trainers can work out your skill level. Then we pair people up for pad work and move around the class giving one-on-one coaching.” That way, you learn to hit in a way that damages your opponent, not your wrists. A boxer’s body is built by boxing. But your conditioning comes outside the ring. “You need to run, a lot,” says Pickard. If you can’t last into the closing rounds, your opponent just needs to wait you out. And there’s no alternative to putting the miles in. For boxing sessions, a skipping rope is still your best friend. You’ll build stamina, shoulder strength, foot speed and coordination. Plus you can always have one in your bag, if you fancy a workout and don’t have a gym to hand.

As for weights, your body is your best friend. “Boxers do some leg work – squats and deadlifts – to build lower body strength,” says Luis, “but mostly it’s about explosive, bodyweight exercises: plyometric press-ups, box jumps, pull-ups.” A great punch is about speed more than strength and mirror muscle only slows you down. Hitting a heavy bag works every muscle in your body. At least, it does if you do it properly. “It’s particularly good for developing the body’s core through rotational training,” says Trevorrow. “That helps with achieving a six-pack, but is also brilliant for preventing injuries in the outside world, which are often caused by twisting.”

Unlike pad word, in which you move around with a partner and throw combinations at their hands, you can get a full-body bag workout without a training buddy. For the below workout, punch for three-minute rounds, with a minute’s rest. Work for 12 rounds as your cardio day, or finish a gym session with four-to-six rounds.

Dwayne 'The Rock' Johnson's Style: A Masterclass For Stacked Guys