DB or not DB? That is the tailoring question with an easy answer: always yes
Image: Daks
By Stuart Husband

Not long ago, I took delivery of my first double-breasted suit. I’d dipped my toe in the water before, with a double-breasted blazer, but this was the real six-buttoned, peak-lapelled, pleated-trousered deal, and, as I pulled the jacket across my chest and fastened it with a flourish, it felt like a step up, not only in terms of formality, but also in audacity.

Since then, the DB has enjoyed a full-on renaissance, with everyone from high-end designers and blue-chip Savile Row establishments to upstart tailor shops producing their own versions of the DB look; sporty, traditionally formal, even jaunty, but all, in their multiple-buttoned finery, strikingly bold.

“A decade ago, double-breasted constituted maybe one in 30 of our orders,” says Thom Widdett, co-founder of Thom Sweeney. “Now it’s more like one in 12 – and rising.”

DB or not DB? – that is the question. We look at the rich history of the double-breasted style, offer some styling tips, and pick out five of the best suits currently on offer, to prove that, in terms of versatility and eye-catching elan, the answer has to be affirmative.

What Is A Double-Breasted Suit?

Yes, we know – d’uh. But behind the obvious answer lies a myriad of technical fine-tuning. “The major difference you’ll notice in a DB jacket is the overlapping front closure and the way it wraps around the chest,” says Widdett. “It’s usually cut shorter than a single-breasted jacket, and the higher buttoning can give the wearer a broader-looking, more sculptured shoulder line.”

The ranks of buttons strike the eye with a force that single-breasted sports jackets just can’t match, whether you’re going for a 6×2 (with six buttons overall, two rows of which can theoretically be fastened), the military-looking 6×3, the low-buttoning ‘6×1’, the boxier 4×2, the 4×1, often favoured for blazers, and the minimalist 2×1. “Each cut has a different effect, both in terms of formality and style,” says Simon Crompton, founder of the menswear blog Permanent Style. The jacket will also have a peak lapel, which adds breadth by taking the standard, single-breasted lapel and extending it toward the shoulder, creating a strong, diagonal line down to the button fastening and adding further breadth to the figure you cut. “It’s a graceful, swooping shape, which accentuates the nipped-in line from the shoulders to the waist,” says Eithen Sweet, Thom Sweeney’s head cutter. It will also have double vents at the back – never a single, and certainly never ventless – that are often, but not always, cut slightly higher than those on a single-breasted jacket.

There are no hard and fast rules for the accompanying trousers, but many find that pleated trousers work best with the jacket shape. “They add a bit of flair if you have the jacket open,” says Widdett. Trouser cuffs can also be added, to accentuate the suit’s air of old-school elegance.

As to whether the DB style suits certain body shapes over others, Crompton demurs: “In my opinion, large men shouldn’t be scared of a double-breasted suit, and slim men should positively embrace it,” he says. Widdett is similarly enthusiastic: “The best-kept secret of the DB? It’s a lot more versatile than people imagine.”

The Suit Of Rakes And Rebels

It may surprise those who consider double-breasted suits to be the exclusive province of florid-faced finance men in their 60s whose girth suggests a penchant for lavish lunches, that the garment’s history has a distinctly subversive cast. Originally descended from the dress uniforms of naval officers, double-breasted suits really came to prominence in the 1920s and 30s, when it enhanced the rakishness of Warner Brothers gangsters (and their real-life equivalents) and members of the British royal family alike.

But the style was considered too outre for a formal office environment: “It wasn’t until the Duke of Windsor started to champion them that they were considered acceptable in the workplace,” says tailor and designer Timothy Everest. After World War II, the DB’s naval association with rank came to the fore – you could now wear one to work, provided you were the boss. Anyone further down the food chain risked being accused of dressing above their station. The DB, it was felt, lacked the common touch, which has continued to prove part of its nonconformist appeal (see contemporary DB enthusiasts such as the Prince of Wales and Jacob Rees-Mogg). That’s why every sitting US president, barring Harry S Truman – a onetime haberdasher – has stuck doggedly to man-of-the-people single-breasted.

It was Giorgio Armani’s revamping of the DB in the late ’70s that began its democratisation; his soft-shouldered, unstructured cut took some of the starch out of it, though it also paved the way for the boxy cuts indelibly associated with ’80s Wall-Streeters and their pinstripe suits. Now, however, the double-breasted suit is back, in a variety of modern cuts and proportions, as a reaction to the predominant super-skinny silhouettes of the last decade or so, exemplified by the likes of Thom Browne and Hedi Slimane. Brunello Cucinelli calls his more slenderly-overlapping version a “one-and-a half breasted,” while, for his SS19 fashion show, Kim Jones at Dior introduced the ‘Tailleur Oblique’, a higher-cut DB inspired by the techniques used to make couture dresses, whereas Paul Smith’s had a slouchy whiff of Young Americans-era David Bowie.

In the athleisure era, the revamped DB could help make the suit sexy again. “A double-breasted look will always have that kind of formal association, but we’re much freer to play with that now, by making versions in cashmere or sportier fabrics, that make it more approachable while still standing out,” says Sweet. “Younger guys are really responding to that. It may be that the DB’s time has finally come.”

Stay On The Button There is one ironclad memo when wearing a DB jacket that a lot of Hollywood types don’t seem to get – and yes, we’re looking at you, Ryan Gosling – and that’s never, ever do up the bottom button on anything higher than a 2×1. “It spoils the line, it looks restrictive, and it locks you in,” says Widdett. “You won’t even be able to move.” All of which is far from the air of sprezzatura nonchalance that a louche DB should confer. You don’t have to go full Master-of-the-Universe when adopting a DB; mixing the jacket with more casual pieces can be the gateway drug into the look. “A knitted polo shirt or a roll neck can look great under a DB jacket while still looking smart,” says Sweet. “Even a T-shirt and jeans can be balanced out, formally, with the right texture on a DB. A lot of Thom Sweeney clients will order a DB suit but wear the jacket separately, in order to dial it down a bit.” Although the double-breasted was inspired by military uniforms, you don’t want to look like you’re on the way to the parade ground, so avoid an excess of shiny buttons; the rule of thumb should be to avoid being mistaken for a rear admiral or Adam Ant in his Prince Charming phase. “That’s not to say you can’t play around with buttoning styles,” says Widdett. “I think a low-buttoning 4×1 DB jacket can look really elegant. You can shop around for a style that suits you.” Although the DB allows you to play with shape and proportion in greater depth than its single-breasted sibling, there are limits; some tailors, for instance, are championing peak lapels on a Himalayan scale. “Each to their own, of course, and some people are really going for those 70s shapes,” says Sweet. “But the DB should really be about elegance, which I think is a bit compromised if the lapels hang over your shoulders.” Sure, a DB works a treat when you’re holding court at the bar or attending a gallery opening – but what happens when you sit down? To undo or not to undo? “Undo,” says Widdett. “A lot of the newer DBs have a smaller overlap, so it still looks good when it’s open and you don’t have an excess of fabric flapping around. Plus, a lot of the newer fabrics are a lot more relaxed in any case, so it just feels natural to undo the jacket. It’s not like a suit of armour any more.”

No other film franchise has done more to promote DB finesse than Matthew Vaughn’s Savile Row-secret agent mash-up, and this wool-silk-linen blend Prince of Wales check offering will have you channelling the panache of Colin Firth’s Harry Hart. 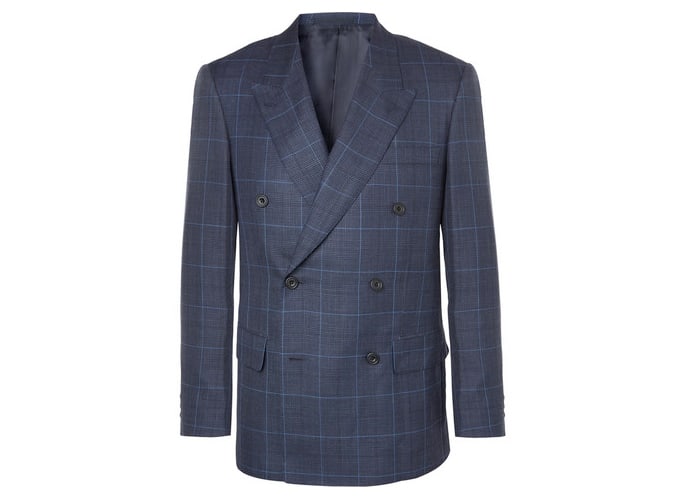 Sweeney’s deconstructed light brown DB blazer, in a 100% wool, fits as snugly as a cardigan, and pairs equally well with a shirt and tie or knitwear and chinos for an impeccable business-casual look. Cucinelli’s ‘one-and-a-half-breasted’ model places the DB buttons closer together for a narrower fit, giving the classic DB shape a more modern silhouette. This blazer in navy comes with gold buttons, and is crafted in a luxurious wool and cashmere blend. A navy DB is hard to beat for statement elegance, and Lewin’s Fitzrovia jacket and matching trousers, woven in Italian wool twill, does the business beautifully. Wear to the boardroom as a full suit or pair with grey pleated trousers and an open neck shirt for a more informal take. 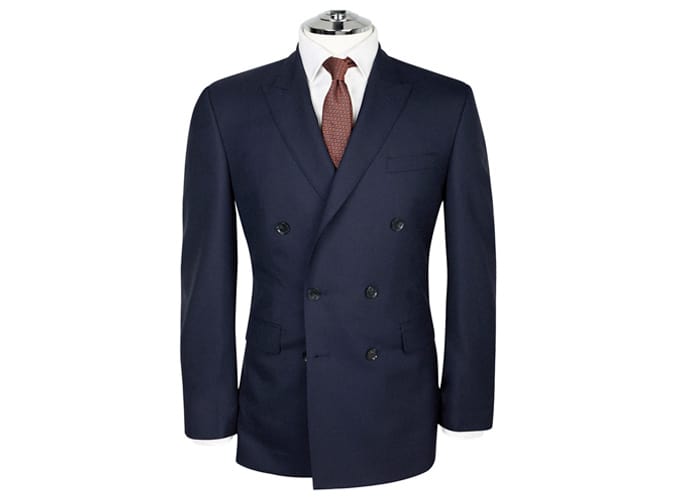 Chest Acne: How To Get Rid Of It Once And For All