Being Superman, there’s some expectation placed upon the extra-wide shoulders of Henry Cavill, an action hero who has mastered the art of both dressing sharp and being immensely stacked – not to mention rocking a moustache with old-school Hollywood flair. We spoke with the British actor, who stars in Mission: Impossible Fallout, to discover his tips on tailoring for those as bulky as he is, plus fitness advice for those who want to be as bulky as he is.

What can you be found wearing day to day?

I’ve spent the past five weeks doing nothing but training so it’s either comfortable shorts at home or gym gear for training – and then I’m back home in comfortable shorts. When I come on press days, it’s all nice clothes so it varies enormously. I do like dressing up in nice clothes but I just don’t have much of an opportunity to do so in regular life. Who are your style inspirations?

I don’t know if there’s a who, but I typically like quite classic styles when it comes to suits because I’m not off the peg. I have to select clothing that’s quite particular. Tapered trousers, for example, don’t look great on me. I look like I have turkey legs – big thighs and a big butt. It doesn’t work on me. It’s more classic stuff that tends to fit.

What are your two wardrobe items of choice?

I would say two tailored suits of different styles. Navy blue is always a good one. For the summer? Linen suits are good. I really like a summer suit in a cream colour. The problem is they do wrinkle and crease really easily and you get that weird bunching behind the leg. But they look super sharp, especially if you go to generally hot countries. The weather we’ve been having here is perfect but you’re not really guaranteed constantly good weather living in England. What are your tips on tailoring for a big guy like yourself?

It’s taken me a long time to get to a place where I’ve found stuff I’m comfortable with. If I’m ever getting something tailored, I’m like, ‘Guys, trust me – this is what works on me.’ It’s just about the experience with your own body and learning what fits you.

As much as I’d like to groom every day, I typically don’t. I try simple things – wash my face, use moisturiser. Washing your face in particular is really important whether it’s first thing in the morning or last thing at night. I just don’t do it enough but we really should. The air, especially in cities, isn’t great and you end up with gunk all over your skin. If you let it in all the time, it does mess it up.

What’s your advice to those starting out in the gym?

Gyms are intimidating for anyone going in – you suddenly feel like everyone’s looking at you and at how much you’re lifting. The truth is it doesn’t matter what they think. You lift what you lift – just don’t injure yourself; people can be silly and lift things that are too heavy. Don’t lift too heavy too early. Also, if you’re doing lots of heavy weights and not much in the way of reps, you’re not really doing much, so just go light and ease into stuff. You don’t need to be a hero on day one. Start doing very small amounts.

For example, if you can’t do pull ups – or you can only do a few – start with a few and do some more each day, then slowly over time you’ll get better and better. Don’t dive into doing 15 pull-ups on the first day – you won’t be able to move for a week. Don’t let your ego rule you. Just take everything at a nice slow pace. What surprised you most about fitness when you started training?

A knowledge base is so important. It’s key to have someone you can go to and talk to and write programs for you and stuff. I know that’s not a luxury everyone can get stuck into but there’s a lot of information on the internet. Also, consistency is key – don’t start and stop. I did that for years with various movies. The first time I started training properly was for Immortals way back when. Then the big lifting and weight training came with Man of Steel onwards.

Before that, I’d stop and get out of shape again then would get back into shape for another movie. It’s about setting a goal or making it a life choice rather than wanting to do something right away. Make it a healthy life choice. There’ll be days you want to crush it and days where you don’t. Take it easy on those days.

Dressed up or down, Cavill knows how to wear tailoring to make the most of his XL body. Tip one: don’t wear your pants on the outside. Beyond that, see below for suped-up suiting.

Kind Of A Big Deal

Classic tailoring is classic Cavill. A generous Savile Row fit flatters his bulk but gives him room to breathe (muscle-fit fans everywhere take note). Knowing that checks and other patterns will only make him look wider, he often sticks to clean and neutral colors. It doesn’t have to be boring, as that tartan tie will attest. Not All Heroes Wear Capes

As every Englishman abroad should know, a linen suit (or separates as Cavill wears here) will keep you cool and unflustered if the weather is decidedly un-British. As well as breathability, the material drapes nicely over superheroic body parts, rather than casing them up like sausage meat. Pastel colors are flattering on bigger guys, too. We’ve Been Expecting You…

Henry Cavill is one of the names frequently mentioned when it comes to the next James Bond. Here’s why. The man fills a tuxedo like few can and doesn’t look like a casino doorman while he’s at it. Everything is classic here with the only point of difference being the textured jacket, which helps to soften the sheer heft of the guy. Honestly, a double-breasted suit shouldn’t work on a man of Cavill’s size, so we’re assuming he’s not at his biggest here. Also, the lapels aren’t too wide and the jacket reaches down to the top of his thighs, helping to elongate the body. The muted check doesn’t scream for attention, either, so kryptonite dodged. It’s not a surprise that the Man of Steel makes this blue look good, is it? Styled the wrong way, this would make you look like a cruise ship entertainer but Cavill pairs the loud jacket with muted colours on the rest of the outfit. Also notice the way his blazer flares out at the hips, balancing those super-shoulders out nicely. Henry Cavill’s mustache in Mission Impossible Fallout is a thing to behold. It gives his Clark Kent features a roguish edge and that’s followed through with this casual take on the three-piece. The open collar adds some attitude to an otherwise traditional get-up, while men with rugby-player quads should look at the trousers closely. That’s how yours should fit. 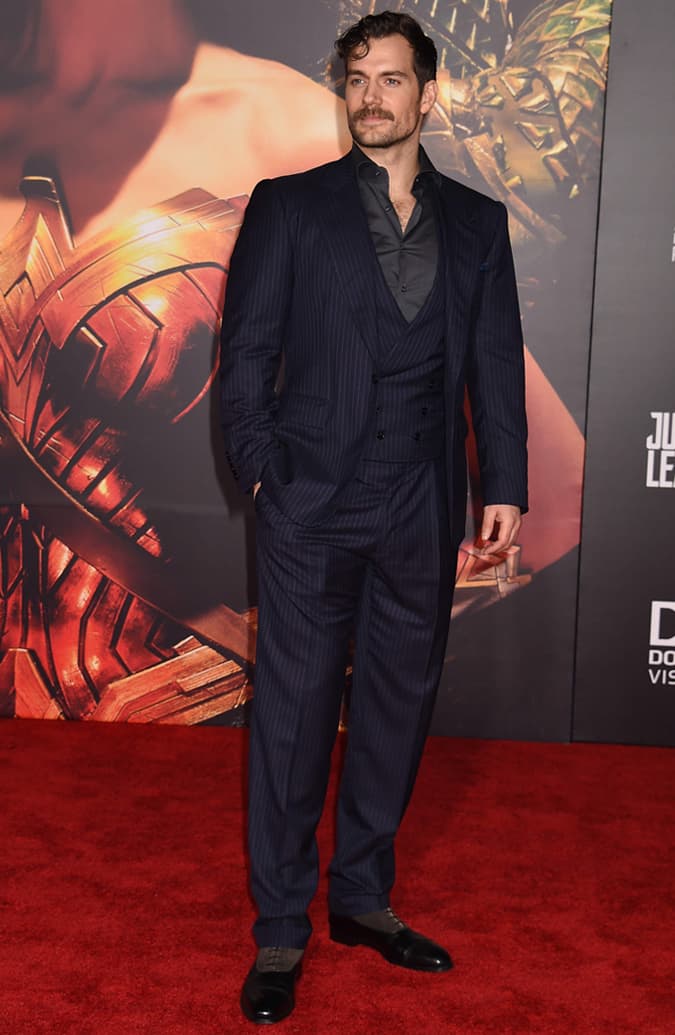 The Most Stylish Men Of The Summer

Hot weather is not usually a friend to menswear. It limits your options and invites you to bare more skin than anyone really wants...