“A well-tied tie,” said Mr Oscar Wilde, “is the first serious step in life.” And like many quotes about men’s fashion and style, its breezy exterior masks something more profound.

A well-tied tie in general, and a well-tied, self-tied bow tie in particular, is one of those things that’s a lot trickier to pull off than one might imagine, and, in common with other arcane initiations – an impeccably clean wet-shave, say, or mastering the loading and unloading of a dishwasher – marks a rite-of-passage into poised, self-possessed adulthood.

Are we investing too much weight in what is, after all, a mere ribbon of fabric draped artfully around a shirt collar? Not a bit of it. No outfit has the ability to transform a man’s appearance and turbo-charge his self-assurance quite like black tie. Just look at Prince Harry (on his dapper way to his wedding reception) or Javier Bardem (classically elegant at the Cannes film festival) for two shining examples of that truism. And their respective pièce de résistance? Their manifestly self-tied bow ties.

“Dress codes are ostensibly egalitarian,” says tailor and designer Timothy Everest. “But when everyone’s in black tie, you can always notice the telling details, and pick out those who’ve made an effort and done it properly from those who haven’t.”

Read on to learn how you, too, can stand out from the crowd at your next formal event. From the tying of it to the correct ways of wearing it, it’s time to get serious about the bow tie.

How To Tie A Bow Tie

There are six steps to tying a bow tie that will transform you, as American songwriter Irving Berlin memorably phrased it, into a “million dollar trooper.” However, in the same way you’ll only know how to tie a tie by distinguishing one business end from the other, it’s crucial to learn the anatomy of a bow before diving in, neck first.

Pull the bow tie to a length where one side fits into the groove of the other (known as the ‘neck’). If you’re right-handed, the longer side should be the right, and vice-versa if left-handed. Fold the longer side of the bow tie over the shorter side, crossing at the strap above the ‘leaf’ of the bow tie. Go under the centre and through, pulling tightly enough that you can feel it, but so it’s not pushing into your neck (or blocking any airways). Discard the longer side (the one you pulled through) over your shoulder. Face a mirror and fold the other side up horizontally with the neck of the bow tie in the centre, so it resembles the shape of the finished product. Bring the long end back into play, and pull it downwards perpendicular to the other horizontal spread. This will form the central knot, so this movement should only use the material on the strap of the bow tie, not the leaf. Once it’s through, stand in front of the mirror again and give it a sharp tug with a hand on each folded end. Then play around with it until you’re satisfied. Don’t worry if it’s a little uneven – that’s the sprezzatura-style top note of imperfection that’s going to telegraph that a) It’s a bona fide DIY job, and b) Raffish dandies like yourself have more elevated things on their minds than hospital corners. The History Of The Bow Tie

Like many of today’s mainstays – duct tape, microwaves – black tie as we know it had its beginnings in the military before its co-option by civilians. The earliest iterations of the bow tie appeared around the necks of Croatian mercenaries during the Thirty Years’ War of the 17th century; they sported a knotted scarf around their necks designed to keep the collars of their shirts from flapping open (and, presumably, distracting them from their swordplay).

Upper-class French dandies took note and adopted the item – under the name ‘cravat’, derived from the French for Croat – through the 18th and 19th centuries when fashionable neckwear in silk or grosgrain became de rigueur. This eventually led on to both the bow tie as we know it today and the classic four-in-hand necktie. And while the whole concept of eveningwear might be considered a little haute now, it’s rather prosaic in origin. It dates from a time when men would devote the majority of their day to horses – riding them, grooming them – and a change of clothing was essential so as not to trail a ripe equine scent to the dining table or ballroom (this is why dinner jackets should always be side-vented or ventless, as a centre vent brings back a metaphorical whiff of horsey pursuits).

How To Style The Bow Tie

Got yourself knotted? Then we can move on to black tie lore. Alan Flusser, author of Dressing The Man, says that a fastened bow tie should always be narrower than the width of one’s face shape, but wider than the outer edges of one’s eyes. Ideally, you should avoid adjustable ties (especially if you’re wearing a wing collar) in favour of a made-to-measure number in your neck size.

Talking of collars, Marcella is the classic British dress shirt material; it’s a clean, dimpled fabric with a stiffness that makes it perfect for bib-fronted shirts. A pleat front is lighter, while a straightforward cotton pique is plain-but-failsafe. Ruffles should only be attempted by the irredeemably fashion-forward (or Ryan Gosling).

Whether you opt for shirt studs or buttons is a matter of taste (but platinum or plain onyx studs will never let you down), as is whether you go for a wing or turndown collar, but whichever collar you choose, the cuffs must always be double and fastened with cufflinks. And it’s perfectly fine to unknot the tie and let it hang rakishly loose, Rat Pack-style, at what Flusser calls the “cigar end” of the evening (though you might want to think twice before quite literally undoing all those man-hours’ worth of hard-won skills). 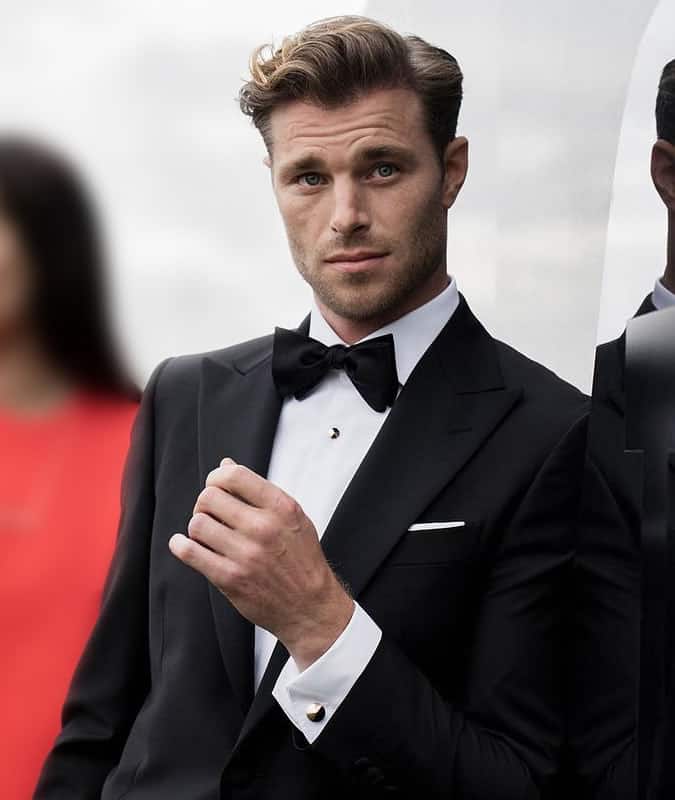 When in doubt, keep it timeless, or at least as timeless as anything that’s only been knocking around for 300 years or so can be: a chunky black tie, a clean, stud-fronted dress shirt, and a peak-lapelled or shawl-collared dinner jacket (see Justin Timberlake in his ‘Suit & Tie’ phase, Bryan Ferry in his Lounge Lizard phase, or Cary Grant in any phase at all for further elucidation). Of course, you’re free to experiment, but we’d advise against, say, wearing a red carnation in place of a black tie (otherwise known as ‘going the full Jared Leto’). Instead, try a midnight blue velvet bow tie with a matching dinner jacket, a la Donald Glover (which, confusingly, appears darker under artificial light than black tie itself). This might also be the opportunity to try out some of the more outre tie shapes – the big butterfly, for instance, or the diamond tip. You’ll notice here that we’ve avoided the word ‘creative’, which has proved a license to abuse a perfectly serviceable dress code for those loners and rebels – you know who you are – whose notion of ‘black tie’ is a black necktie and shirt with a dinner jacket, or – even worse – no tie at all. There are more subtle ways of fiddling with the formula while remaining on point; try a silk jacquard bow tie, or a knitted silk pique example, for that extra dash of sworn-to-fun, loyal-to-none elan. 99 Get To Know You Questions, From First Date To Happily Ever After
2

Design Classics Every Man Should Own
3

How To Wear The Oversized Trend And Still Look Tailored