The 6 Best Ways To Wear A Scarf

Because there's more to it than just slinging it over your shoulders (sometimes)
Image: windsor.
By Paddy Maddison

Whether you’re getting it in the neck from an icy Arctic breeze, or just really dig the art student look, every man needs a scarf or two in the locker. It’s not just about mobile central heating. Getting creative with your accessories game is one of the best ways to take a look from pedestrian to (north) pole position.

During the colder months of the year, when most of our wardrobes are about as colourful as a lump of charcoal, scarves offer a way to introduce a brighter shade, a different texture or a contrasting pattern. Even the way a scarf is tied can open up a world of possibilities in terms of experimentation.

Allow us to introduce you to a few of the best scarf tying methods.

Favoured by every man who’s ever been in a 1990s British rom-com, right through to the modern-day menswear elite (a pretty broad margin, we’ll grant you), this method is without a doubt the most effortlessly stylish way of wearing your winter neckwear.

“The drape has the benefit of slicing the body in half [editor’s note: not literally] with it’s vertical lines, making you look taller and slimmer,” explains Sarah Gilfillan, founder of men’s personal styling and shopping consultancy, Sartoria Lab. “When worn tucked under a coat or jacket to echo the lines of the lapel it’s a great way to add a little colour, pattern & flair to your outfit as well as keeping you warm.”

To get the look, simply… do we really need to spell this one out for you? The Parisian knot, also known as the European knot, is one of the most popular, versatile and least complicated scarf knots around – perfect for adding a touch of that effortless, fuss-free French style to almost any winter outfit.

“This knot looks great with a single-breasted jacket or peacoat for smartening it up, says Thread stylist Luke McDonald. “However, it’s a bit too dressed up for more casual outfits like bombers or denim jackets generally. And never try it with vertical stripes.”

To achieve it, simply fold the scarf in half, drape it around the back of your neck, place the loose end through the loop created. Pair it with a Breton top, hop on your bicycle, throw a few fresh baguettes in the basket and you’re good to go. If your scarf tying knowledge pretty much maxes out at ‘wrap it around your neck’ then prepare to have your mind blown, because this, my friends, is where things get interesting.

“[The fake knot is] great for business wear, very sober and professional in its style, quick to tie and take off too,” says personal stylist Daniel Johnson. “Having the scarf draped down the front of the body, rather than the back, means it’s easier to keep control of or to adjust.”

Bear with us, as this one is a little more complex to pull off: place the scarf around your neck, just like with the drape, but leave one side slightly longer. Next, use the excess fabric on the longer side to tie a very loose knot. Finally, feed the other end of the scarf through the hole and adjust to your desired tightness. 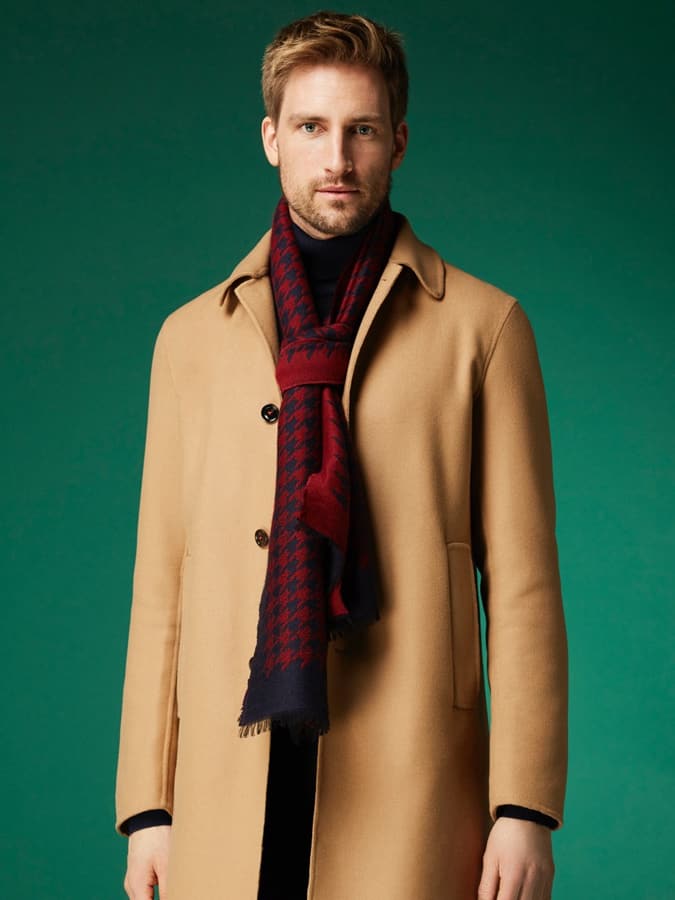 If the fake knot is putting your head in a spin but the drape is a bit too relaxed for your liking, the over-hand might be more up your street. It’s a simple knot that works well with most scarf lengths and thicknesses, and will pair well with anything from a suit and overcoat, to joggers and a hoodie.

“Wear a colour that tones with your outer layer for elegance, or something contrasting if you want to make a style statement,” suggests stylist to the stars Phill Tarling. “For an added touch of the dapper, keep it securely in place with a cravat pin.”

This one’s pretty straightforward: drape the scarf around your neck, leaving one end slightly longer; cross the longer end over the short end, then wrap it under and pull through to form a loose knot just below your chin. Finally, adjust both ends of the scarf, making sure they lie flat against your chest. The reverse drape is an absolute classic – cosy, casual and ideal for wintery weekends about town. This knot is basically the drape’s more informal cousin and where the drape looks best layered under a jacket or overcoat, the reverse version should always be worn over the top.

“Best worn with casual or smart-casual wear – this knot covers high up the neck and almost on to the face,” explains stylist, Johnson. However, because it takes a little longer to tie [than the drape], you wouldn’t want to be using this knot during the week when you’re dashing to work. The style of the knot is much more relaxed anyway.”

Start off with a classic drape, making sure both ends of your scarf are of equal length. Next, toss one end back over its opposite shoulder and repeat with the other end so that both are hanging neatly down your back. Job’s a good’n. For a technique that just exudes care-free cool, you need look no further than the once-around. As the name suggests, this method involves loosely wrapping the scarf once around the neck – the more nonchalantly you can drape it, the better.

“The once-around, which is actually barely a knot at all, offers more relaxed coverage by hanging loosely around the neck and chest,” says Olie Arnold, style director at Mr Porter.

“This raffish style can be achieved with either a thin, lightweight scarf in cashmere or wool, or a chunky, heavy scarf with elasticity and texture. This scarf tie is perfect for dressing down a buttoned-up blazer or topping off a more casual look.” 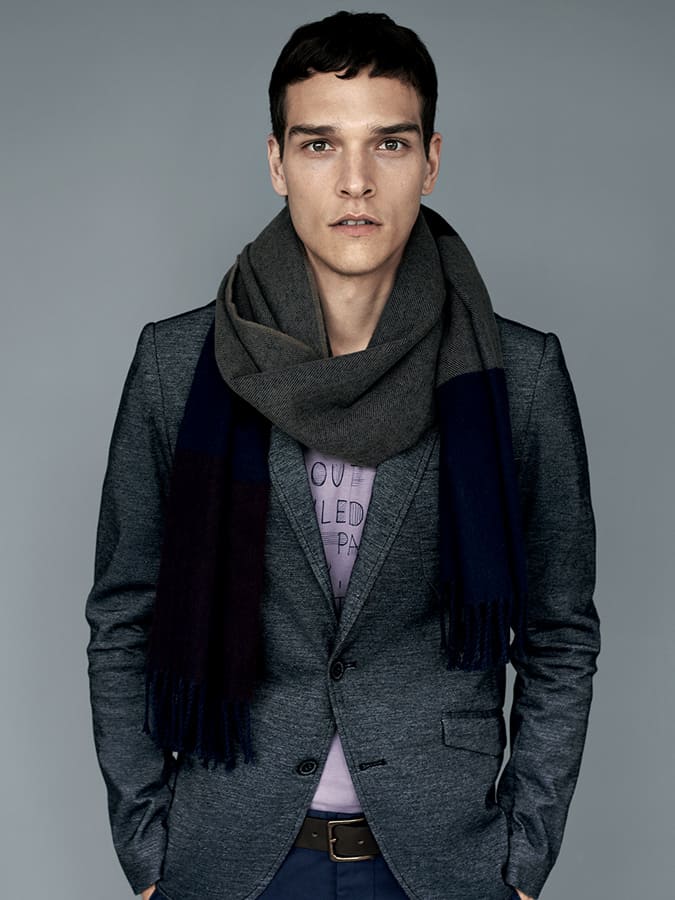 The Best Braid Hairstyles For Men 2020
4

How To Roll Your Shirt Sleeves: 4 Easy Options
5

The Coolest Men's Magazines In The World Right Now

Blonde Ambition: How To Bleach Your Hair Who does the platinum look suit and how do you get it?